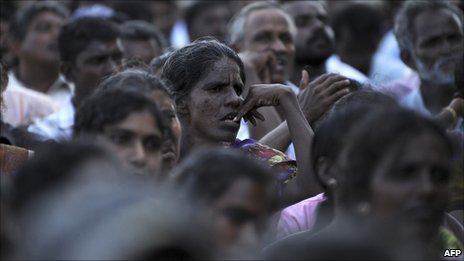 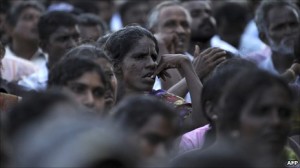 By Charles Haviland/BBC News, Kilinochchi
The dirt road leading south-west from Kilinochchi town is pale red, the colour of the soil of the Vanni, the northerly extreme of the Sri Lankan mainland. It is a land that lost all its people. They retreated with the Tamil Tigers as the civil war swept through Kilinochchi more than two years ago. There are burnt-out husks of houses.

But new huts are now scattered among the trees. There is a bonfire by the roadside and small shops that returnees have opened.

A few soldiers pass on bicycles. People walk by the roadside like strangers rediscovering the land of their roots. Hundreds of thousands have left army-run camps to come home.

Entry to this region has been heavily restricted for years. But the BBC was given unconfined, though temporary, access to Kilinochchi district.

Chandrasegaran Thayakaran, his wife Vinodha and their four-year-old son Dhanushan are working together to put up a modest wooden-framed house in Unionkulam village.

The boy scoops up sand and carries it to the building site, patting it down carefully.

Chandrasegaran, now 22, married at 17 to escape being recruited by the Tigers.

The family lived through months under bombardment in the war zone and a year in a camp. They got a UN grant equivalent to $230 (£143) when they came out.

Since then they have had some cash help from the Save the Children charity and pawned their possessions to get by. Chandrasegaran gets some casual labour work.

Any gladness at returning to his village is heavily tempered by tragedy.

Chandrasegaran lost many members of his family in the war
“I lost my mother, my little brother and my elder sister and brother in the war,” he tells me. “We’ve come here without our family. So we’re not really living happily.”

At least people in this newly resettled community are supporting each other.

Chandrasegaran’s two friends were both wounded in the war. Now they are helping the family build. The three laugh and joke as they go off by motorbike.

Everyone has had a difficult homecoming, haunted by trauma and loss.

Nagamma Chandran, a widow of about 50, lives with her mother and teenage son in a shack of tin and tarpaulin built with help from the Dutch refugee organisation ZOA and the UNHCR.

She lost her brother in the war. She and her mother are sick and she cannot find work; nor can they afford transport to a hospital.

“We’ve been here almost three months. Since then we have got nothing, no help. We get 100 rupees ($1) per month each in aid money,” she says.

“The government is not helping us. I have sent a lot of letters, but there’s no reply.”

She says the government is doing all it can to help the displaced people returning home.

But she admits that some people “could not get” it – perhaps an acknowledgement that some, like the landless villagers we met, fall through the safety net.

“Whatever they get, they have to be satisfied with that.”

Many come to admire the victory monument
The town centre of Kilinochchi is very different from the hinterland around it.

Half a dozen soldiers, supervised by an officer, lovingly tend a huge – some say bombastic – monument to the government’s war victory.

One soldier snips the grass with scissors to keep it neat. They are on duty here around the clock.

Its centrepiece is a massive concrete cube representing the Tamil Tigers’ violent insurrection.

It is pierced and cracked by a big bullet, said to symbolise the “sturdiness of the invincible Sri Lankan army”, and topped with a flower of peace.

The adjacent tablet says President Mahinda Rajapaksa was “born for the grace of the nation”.

Not many local Tamil people seem to visit. One man tells us he finds the monument insulting.

But others flock to admire it, including a busload of Sri Lankan tourists, among them a Buddhist monk from the central highlands.

As in the countryside, everyone in town is newly returned.

Almost all have lived through terrible war experiences.

Yet Kilinochchi is now achieving a kind of normality, though under the ever watchful eyes of soldiers on every corner.

At the main bus stand, people buy transport and lottery tickets. Children eat ice-cream. There is even a souvenir shop selling T-shirts saying “Reawakening Kilinochchi”, situated by a huge water tower dynamited and toppled by the Tigers.

Back in her village, Nagamma makes tea. She, like other destitute returning refugees, struggles to afford the basics of life.

I ask her if she wants punishment for those responsible for her brother’s death.

“We don’t need another war or fight,” she says.

“We’ve lost a lot because of the war and it mustn’t happen again. Our time is finished now, but at least the remaining children must be happy.

“Every day I pray to God for a peaceful country, where every person of every race can live in peace.”