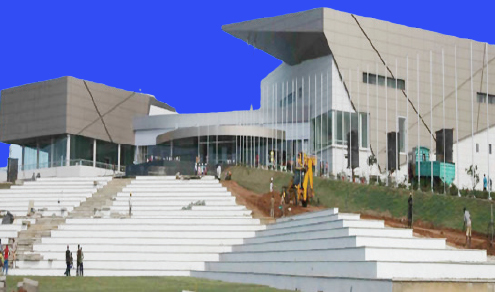 Multi-million rupee white-elephant mega projects in Hambantota, the constituent district of the former President Mahinda Rajapaksa, are now idling and have become a massive burden to the country’s economy.

Hambantota has been the focal point since Rajapaksa was elected to office in November 2005 and billions of rupees have been spent on unnecessary projects. It is distressing to note the huge amount of money the previous regime has spent unnecessarily on unwanted projects that the country could not afford.

The construction work of the Magampura Mahinda Rajapaksa International Port initially cost the country US$ 360 million but later the former government sought more money from China to remove a massive seabed rock near the entrance. The Sunday Leader at that time exclusively broke the story that a rock, 10 metres in length and seven meters in depth, submerged at the mouth of the harbour.

This was after the port was opened with much fanfare in November 2010. The “Hambantota rock’ couldn’t be blasted at once because it could have damaged the costly infrastructure at the Hambantota Port. Hence the authorities initiated blasting the rock little by little. However, the deeper the blasting, the cost went up very high.

“The government had been warned by a Canadian consultancy firm SNC Lavalin about this rock during a feasibility study carried out during the President Chandrika Kumaratunga’s tenure between 1994 and 2001. Thereafter yet another feasibility study was carried out by Ramboll of Denmark when President Mahinda Rajapaksa was the Ports and Fisheries Minister during the tail end of the Kumaratunga regime at a cost of US$ 2 million which was borne by the SLPA. Subsequently, it is learnt that an additional US$ 82 million (Rs. 9 billion) obtained from China had been spent on blasting and removing the rock,” sources said.

This was however substantiated by the then Chief Engineer of the Hambantota Port Agil Hewageegana who said that the Chinese funded harbour may cost the country US$ 361 million.

“Now the country is in debt and the only solace is the arrival of vessels that bring imported vehicles to the country. Since the Rajapaksa regime assumed that more ships would arrive at the Magampura Port, in order to ensure a congestion free traffic, a six-lane highway, a flyover and an interchange were built in the Hambantota District spending millions of dollars. These roads are now empty. Some internal roads that lead to the airport are now being used by villagers to dry pepper crop. In addition to these wastages, the Colombo-Matara railway line is now being extended and the southern expressway is to be linked to Hambantota very soon costing millions of dollars,” an official at the Magampura Mahinda Rajapaksa Port said.

The official, speaking on condition of anonymity said that if not for the vessels carrying vehicles, the Magampura port would have been an utter failure.

Overlooking the port is another nonessential building – the Magam Ruhunupua International Conference Hall. The only international event that was held at this conference hall so far was the 2013, 9th Youth Forum of the Commonwealth Heads of Government Meeting (CHOGM). Other than few local events, no major events have been held at this venue since then.

This International Convention Centre has been constructed on a 28-acre land at Siribopura in the Hambantota District at a cost of US$ 15.3. It has restaurants, exhibition halls, modern sound and recording facilities as well as an open air theatre. “All these are idling now and the government is spending millions of rupees on maintaining this International Conference Hall. When this country does not hold much international conferences, it is questionable why such a large conference hall was built spending public money unnecessarily which would have spent on concessions being given to the people who suffer from the high cost of living,” the sources added.

Mahinda Rajapaksa National Tele Cinema Park stands on 235 acres in Ranminitenna in Hambantota. The total cost for constructing this park was Rs. 2 billion.

According to an official in the Hambatota District Secretariat, funds for the project were obtained from taxes levied on foreign films and tele-dramas. According to him, modern studios and locations such as hospitals, police stations and courts are housed in the premises.

Lodging facilities for over 100 people, restaurants, a separate building to hold workshops and a large vehicle park have also been provided.

However this is yet another white elephant. Since its opening in March 2010, there has been little or no film shooting at this center.

Mahinda Rajapaksa International Cricket Stadium in Suriyawewa is yet another white elephant project. Built at a cost of Rs. 700 million, the stadium was declared open in 2011 for the World Cup matches. According to the Hambantota Divisional Secretariat, only a few matches including the two World Cup matches have been played on this ground. With a seating capacity of 32,000, the Suriyawewa cricket stadium, built on a 47 acre land, stands desolate now.

According to the sources, the Sri Lanka Cricket spends money in vain on maintaining the stadium. Watering the grass on the ground alone has become a huge cost.

“In order to hold day night matches, the flood lights that were fixed at the Rangiri Dambulu International Cricket Stadium was removed and shifted to the Suriyawewa grounds. This is a waste of money. The Rajapkasa regime did not consider the consequences but spent lavishly on any project they wished as if the public money was their private property. During the two world cup matches held at Suriyawewa, the government went to the extent of bringing a few tamed elephants and chaining them at nearby trees, to give an impression to the international players and audience that this cricket stadium is environment friendly and even the wild animals are roaming freely nearby. This alone showed the ignorance of the our previous leaders and the officials who work under them,” sources said. Mahinda Rajapaksa International Airport – the second international airport in the country – stands on 2,000 hectares of land. Although Rs. 39,600 million was spent on this project, international airlines rejected landing there. Therefore, it faced difficulty in achieving the target.

“Earlier this airport was to be built in Weerawila but due to strong protests from environmental organizations, the then government had to drop the venue and started the work at Mattala which is home for many wild animals including elephants’. Despite the protests the Rajapaksa regime ignored environmental warnings and feasibility studies and went ahead with the project. This is a route for migratory birds as well, and Sri Lankan flights experienced collisions many a time with these migratory birds and aircraft windscreens got damaged as well. The area was an elephant corridor and even after the opening ceremony, wild elephants roamed the airport premises,” sources added.

This airport was built to land Airbus A380 which cannot be landed at the Bandaranaike International Airport. The Airport and Aviation Services Limited claimed all international airlines that land at the Colombo airport have showed interest in landing at Mattala, but not a single international airline fulfilled their promise. “It was designed to accommodate more than 1000 passengers at peak hours. In addition to the unnecessary expenditure, the then President came to the airport on a Sri Lankan Airline flight spending further millions of rupees to commence the airport operation. This is the only airport in the world disregarded by international airlines. Other than Sri Lankan and Mihin Lanka, the only airline the Mahinda Rajapaksa International Airport provides its service was Fly Dubai – a budget airline.

According to the sources, because of the huge cost of maintaining the airport, soon after the presidential election on January 8, the new President ordered Sri Lankan and Mihin Air to discontinue their flights via Mattala and to switch off the terminal air conditioning units and decorative water fountains which has been estimated to save about US $20 million annually.

Hambantota Botanical Gardens is yet another failed project carried out by the previous regime. It is said that the botanical garden which has been constructed on a 300-acre land needs bowsers of water every day to keep its non-native plants alive. Villagers in the area which receive little rain, they who is scratching a living, meanwhile have to receive their drinking water that is being trucked into the area.

“We are growing wet-zone plants which are not native to this area,” a curator told to AFP during a tour of the garden opened by Rajapaksa during the Commonwealth summit. If people know the true extent of the water being wasted here, there may be a riot,” said a university professor who declined to be named. “We thought this was to conserve plants in the area, but to take care of plants that require a lot of water may not be sustainable,” sources added.