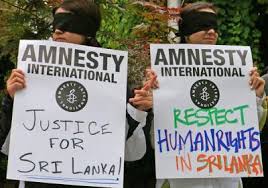 The Government wants to rush a five-year National Human Rights Action Plan (NHAP) next week as part of its initiatives to get the European Union to restore the GSP Plus tariff preferences to Sri Lanka.

The 300-page report, which meets most of the conditions laid down by the EU, will come up for discussion at the weekly ministerial meeting on Tuesday.

It was discussed by ministers last Tuesday but some ministers urged that immediate changes be made. On the instructions of President Maithripala Sirisena, these changes were finalised at a conference chaired by Prime Minister Ranil Wickremesinghe on Friday.

One of the changes was a requirement in the NHAP draft that the introduction of a State of Emergency needed two thirds approval from Parliament. It has now been dropped together with another provision which sought to decriminalise homosexuality.

In the next two to four months, Sri Lanka will have to convince a majority within the European Council and the European Parliament to back its application for GSP Plus before the concession is finally granted, diplomatic sources warned this week.

While Government leaders have already announced that Sri Lanka has “regained” the GSP Plus incentive from the EU, several weeks of intensified lobbying combined with improvements of the ground are crucial, they said. “No rubber stamping should be expected,” one senior diplomat asserted.

The Council consists of all 28 member states. Hence, domestic compulsions in the respective countries — for example, the diaspora lobby in Britain, reports of human rights organisations and trade unions on labour issues — could get factored into the final decision. The European Parliament has 751 members and a majority would need to back the Commission’s recommendations. Many trade deals have been stopped in European Parliament — including, recently the Transatlantic Trade and Investment Partnership (TTIP) between the US and the EU, despite all 29 Governments endorsing the initial decision.

The Sri Lankan Government must remember that the debate on the Geneva Resolution happens at the UN Human Rights Council in Geneva in March, the sources said.

“The way the Commission recommendation is dated, progress made by Sri Lanka is considered as of early January 2017,” a source explained.

“These are based on the many Government promises which were originally scheduled to be completed by the beginning of this year. They included changes to the Prevention of Terrorism Act, a transitional justice mechanism and constitutional reforms.”

The “disastrous” UN Committee against Torture meeting that took place in Geneva in November rang alarm bells in many quarters, diplomats pointed out. But there are also other issues at hand. Among them are the 15 conditions notified by the European Commission in 2010. These include, for instance, repealing PTA sections which are incompatible with the International Covenant on Civil and Political Rights (ICCPR); responding to the significant number of individual cases pending before the UN Working Group on Enforced Disappearances; and ensuring that journalists can exercise their professional duties without harassment. It was the previous administration’s refusal to respond to these conditions that led to the GSP Plus being withdrawn.

To qualify in the eyes of the Council and Parliament, Sri Lanka’s implementation of an entire set of 27 international conventions also needs to be characterised as having “no serious failure”. Also under consideration will be issues stemming from the Geneva Resolution — such as release of land and detainees.

It is learnt that the EU Mission in Colombo has also been pressing officials for updates on implementation of obligations. A team is heading to Colombo to discuss related matters and Sri Lanka’s responses will be critical, the sources said.

The focal point for GSP Plus in Sri Lanka is officially Sonali Wijeratne, Director General of Commerce. She functions under the Secretary to the Ministry of International Trade. In the past, she has expressed unwillingness to get involved in rights issues — human, civil, political — raised by the EU, saying they are outside her purview. This has left several divisions within the Ministry of Foreign Affairs to handle the subject.

“The best case scenario for Sri Lanka is for the Commission decision to go through in both the Council and Parliament within the two-month timeframe; that is, by March 12,” the senior diplomat earlier quoted said. “Next best is within the four-month limit; that is by May 12.”

“If a majority in either the Council or Parliament object to the deal, Sri Lanka will have to start over,” he said. “This means going back to square one and submitting a fresh application. That process would take a further eight to ten months.”
Sunday Times