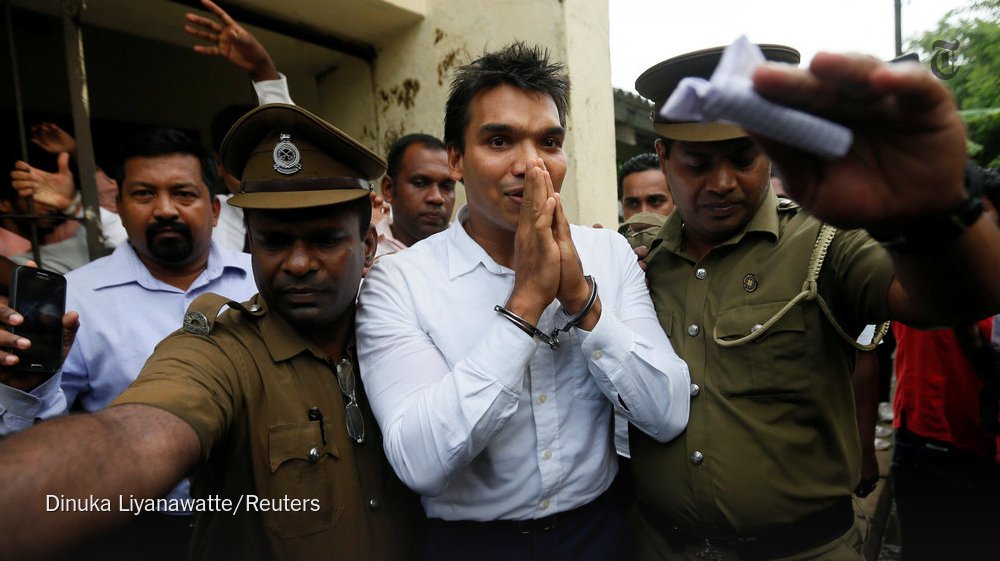 A green light from the Attorney General that the proposed draft CJC Act does not contravene the Constitution and a final draft from Legal Draftsman will see the Cabinet of Ministers approving it. Even provisions which are held to contravene the Constitution could be deleted. There is little doubt that the proposed CJC Act will be a strong weapon in Sirisena’s hands particularly when he has not been successful in uniting the SLFP.

Proposed CJC Act: Those found guilty to be stripped of their civic rights for up to seven years
“Establishment of Criminal Justice Commissions

A Commission established under this Act shall be deemed to be a superior court of record.
Subject to the other provisions of the Act, the terms of reference of a Commission shall be –

To inquire and determine whether any person or persons and if so what persons were or were not guilty of such offences and/or actionable wrong; and     to deal with the person so found guilty or not guilty in the manner prescribed by this Act.

Where a warrant establishing a Commission is issued by the President under the preceding provisions of this section in consequence of his opinion, under such provisions, expressed in the warrant, such opinion and such warrant shall be final and conclusive and shall not be called in to question in any court or tribunal, whether by way of action, application in revision, appeal, writ or otherwise.
“Appointment of members of a Commission

Where any member of a Commission dies, or resigns, or desires to be discharged from the performance of his duties in respect of the whole or part of an inquiry, or refuses or becomes unable to act, the President may appoint a new member in his place for the whole or any part of such inquiry.
At any inquiry before a Commission, the determination of any question before the Commission shall be according to the opinion of the majority of the members of the Commission.
An inquiry by a Commission under this Act shall be commenced and held, with due regard to the interests of justice, as expeditiously as possible, and accordingly the Commission-

(a) may, where any pleader appearing for any person desires to address the Commission upon any question or matter, limit the duration of the address, and in such event require the address to be submitted in writing;
(b) may commence, or continue with, the inquiry notwithstanding that the pleader appearing for any person is absent or desires to withdraw from the case, or such person desires time to make a change of pleaders;
(c) may commence, or continue with, the inquiry in the absence of any person-
(i) if the Commission is satisfied that such person is evading arrest, or absconding, or feigning illness; or
(ii) with his consent; and
(d) shall take all such other steps as it may consider necessary for the purpose of enabling the inquiry to be expeditiously held.

“Powers of a Commission

(q) The Commission shall have power to call for representations from the public relating to matters within the scope of its terms of reference, whether expressly specified therein or not, and to inquire into and report upon any such representations.

“Procedure and practice before a Commission

(1) The proceedings at any inquiry before a Commission shall be free from the formalities and technicalities of the rules of procedure and evidence ordinarily or normally applicable to a court of law and may be conducted by the Commission in any manner not inconsistent with the principles of natural justice, which to the Commission may seem best adapted to elicit proof concerning the matters that are being investigated.

The Attorney-General may, at any time before or after the commencement of any inquiry before a Commission but before the conclusion of such inquiry, with a view to obtaining at such inquiry the evidence of any person, tender a pardon to such person, on the condition of his making a full and true disclosure of the whole of the circumstances within his knowledge relating to any offences which are the subject of such inquiry: Provided, however, that if the person who has accepted such tender has not complied with the condition on which the tender was made, a finding concerning such person for the offence in respect of which the pardon was so tendered may be made by the Commission at such inquiry.
“Power of Commission to deal with persons found guilty or not guilty of offences and/or actionable wrongs

Where, at the conclusion of any inquiry before a Commission under this Act, the Commission is satisfied beyond reasonable doubt that an offence has been committed and/or on a balance of probability that such person has committed an actionable wrong, having regard to the proceedings and upon consideration of the matters before it at such inquiry, that any person has committed any offence and/or actionable wrong which has been the subject of such inquiry, the Commission shall make a finding that he is guilty of such offence and/or actionable wrong and shall sentence him to any punishment, other than death or impose liability, to which he might have been sentenced if he had been tried and convicted by the Supreme Court.

Notwithstanding anything to the contrary in any other provision of this Act, where the Commission finds a person guilty of an offence and/or actionable wrong, the Commission may in lieu of imposing a penalty or fine under preceding Section, make order that any moveable or immovable property found to have been acquired by the commission of an offence and/or actionable wrong or proceeds thereof, be forfeited to the State free from all encumbrances: Provided however that, in determining whether an order of forfeiture should be made, the Commission shall be entitled to take into consideration whether such an order is likely to prejudice the rights of a bona fide purchaser for value of any person who has acquired, for value a bona fide interest in such property.

(1) Where a commission finds at the inquiry and reports to the President that any person has been guilty of any act of political victimization, misuse or abuse of power, corrupt or any fraudulent act, in relation to any court or tribunal or any public body or in relation to the administration of any law or the administration of justice, the commission shall recommend whether such person should be made subject to civic disability, and the President shall cause such findings to be published in the Gazette as soon as possible, and direct that such report be published.

(2) Parliament may upon a Resolution duly passed by not less than two thirds of the whole number of members (including those not present) voting in its favour-
(a) Impose civil liability on such person for a period not exceeding seven years, and
(b) Expel such person from Parliament, if he is a member of Parliament
(3) Any report, finding, order, determination, ruling or recommendation made by a commission under this law, shall be final and conclusive and shall not be called in to question in any court or tribunal by way of writ or otherwise.
(4) For the purpose of this section civil disability, shall mean the disqualification of a person-
(i) from being an elector and from voting at any election of the President of the Republic, or to any election of a member of the National State Assembly (sic) or any local authority;
(ii) from being nominated as a candidate at any-such election;
(iii) from being elected or appointed as the President of the Republic or from being elected as a member of the National State Assembly (sic) or of any local authority, and from sitting and voting as such member and

Note: The clauses relating to the National State Assembly has been ‘lifted’ from the Criminal Justice Commission Act of 1983 which now stands repealed.
(iv) from holding office, and from being employed as a public officer.

“Special provisions applicable to sentences imposed by the Commission

The Minister of Justice may, by Order published in the Gazette, declare that such of the provisions of Chapter XVII of the Criminal Procedure Code as are specified in the Order shall, mutatis mutandis, apply for the purpose of enabling a Commission to charge persons for offences punishable by the Commission in like manner and to the same extent as they apply in the case of charges under that Code.
“Findings and sentences under this Act to be final and conclusive.

Any finding made, or sentence imposed by a Commission under this Act shall be final and conclusive, and shall not be called in to question in any court or tribunal, whether by way of action, application in revision, appeal, writ or otherwise.

No court shall, notwithstanding anything to the contrary, have power or jurisdiction to make any order at any state whatsoever and in any manner-
(1) Staying; suspending or prohibiting the holding of any proceeding before or by any commission established by warrant issued by the President in the exercise or purported exercise of the powers vested in the President under section 2 (1) or the making; of any order, finding, report, determination, ruling or recommendation by any such commission;
(ii) Setting aside or varying any order, finding, report, determination, ruling or recommendation of any such commission:

“Effect of this Act notwithstanding inconsistencies
27. The Provisions of this Act and any warrant issued under the provisions of this Act shall be so interpreted and given full force and effect in order that the Commission shall have full authority and power and jurisdiction to inquire into the conduct of any President, Minister or other public officer including –
(a) the misuse or abuse of power, interference, fraud, corruption or nepotism,
(b) any political victimization of any person,
(c) any irregularity-
(i) in the awarding or receipt of any Government tender or contract
(ii) in the making of any appointment or transfer of any person,
(iii) in granting of any promotion to any person,
(iv) in the termination of the service of any person.”