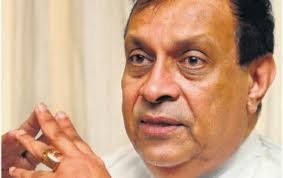 The Independence of the Judiciary was being eroded by the government, which was coercing it into infringing on the fundamental rights of people, UNP MP Karu Jayasuriya told Parliament yesterday.
MP Jayasuriya, participating in the committee stage debate on Budget 2014, said: “Decades of judicial experience and independent judgments have been destroyed. Even the lower courts are under tremendous pressure. Very soon, even to hold a political rally we may have to obtain permission from the government and the judiciary. If they do not comply they will have to sacrifice their professional careers.

“The appointment process of Judges to the Superior Courts, the Court of Appeal, the process of appointing the members of important commissions such as the Bribery Commission and Human Rights Commission are all in jeopardy with the repeal of the 17th Amendment and the lack of representation of members from both the government and the opposition.

“In the Supreme Court, there are two vacancies that were created by the retirement of Justice P. A. Ratnayake and Justice Amaratunga. Those vacancies have existed for nearly 6 months and 3 months respectively. Why has there been a delay in filling these vacancies? There is serious delay in the administering of justice by the courts. In such a backdrop, a legitimate question arises as to why there has been a delay in filling those vacancies. Unless there is an ulterior motive, we cannot see any justification for such and undue delay.

In the Supreme Court, determination was made by a Bench presided by Justice Amaratunga. Justice Amaratunga suffered a stroke a few months after giving the judgment. Justice Sri Skandarajah, concurring with two other judges, quashed the parliamentary select committee report. Justice Sri Skandarajah is bed-ridden and almost a vegetable. He was overlooked for promotion to the Supreme Court on five occasions. Finally he was prevented, for nearly 5 to 6 months from being promoted. There is no need to promote him anymore.

“Take the Bribery Commission. One person makes the appointments to these bodies and they act on the political dictates of such persons. A number of complaints have been made against government politicians, who have squandered millions and billions not in rupees but in dollars. These persons are roaming around scot free. Not a single one of those complaints have been inquired into. Be assured that we will not only inquire into these crimes against the society but also inquire into the conduct of those who are tasked with the duty of inquiring into these crimes but are acting in a dishonourable and dishonest manner.

“In the recent past, an honest customs officer, who nabbed a racketeer, was framed on a concocted and fabricated charge of bribery.

“There are allegations of corruption against very high people in the bribery commission.

“The courts are most unfavourable in matters, when called upon to hold against the government, because they are under immense pressure. Soon, this country will come to a situation far exceeding that which exists in Colombia, where the Judges have to go home by creeping through the windows after issuing judgments. The rule of law is of little concern. The Chief Justice himself was quoted, at a public function, saying that ‘one should not pay lip service to rule of law’. The civil society is shocked and dismayed.

“Government harassment of their political opponents through the law enforcement authorities is rampant. Police powers have been vested in the armed forces, very much in violation of Section 12 of the Public Securities Ordinance. This is why there was shooting by the armed forces in Rathupaswala, killing 3 people, injuring many others and desecrating a place of worship. The law that applies to government supporters is one and the law that applies to their political opponents is another. It appears that not only the King, but his men and all of their henchmen can do no wrong. It appears that the Presidential immunity applies to all hoodlums. The civil society is shell-shocked.

“When a person, who has no money in a bank account, is prosecuted with the passport being impounded, in a political witch-hunt, others who do not declare their assets at all are enjoying the ‘immunity’, that they do not have, with impunity. If the judiciary conducts itself in a partisan manner, as they do, the day will soon come when the public will have no more respect for the judiciary. Today, people have started talking about this serious erosion of the Judicial System.

“I made these observations in good faith. As chair of the Commonwealth we have to set standards. We have to be a model nation for others to follow. We want to die in a democratic country.”
By Saman Indrajith
IS