Govt Show of Force at Hulftsdorp Puts Justice to the Sword 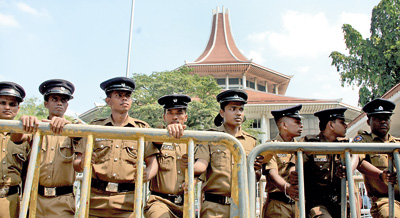 On the Spot Report By Namini Wijedasa and Wasantha Ramanayake
The corridors of the Superior Courts building were oddly uncongested on Tuesday, the first day of work for the New Year.

There should have been throngs of jovial lawyers, slapping one another on their backs, and asking how the holidays had been. But attendance was markedly low. Attorneys drifted through the passageways looking apprehensive. Some assembled in small clusters, discussed current affairs in muted tones.

A lone security guard stood outside Court 502 (usually the domain of the Chief Justice) watching a drama unfold in the street below. Hundreds of policemen, armed guards and plainclothes agents had been deployed around Hulftsdorp. Every gate to the Superior Courts complex was barricaded. There were two water cannon, one of them parked near the headquarters of the Sri Lanka Bar Association.

Court security checked all vehicles that sought entry into the premises, regardless of whether they belonged to lawyers or judges. This was not the norm. If the vehicles had tinted windows, they opened the doors and peered inside. They even looked into the boot. “Do they expect to find her crouching on the floor?” a journalist asked, referring to Dr Shirani Bandaranayake who maintains she is still the Chief Justice.

For it was to prevent Dr Bandaranayake from accessing the Courts complex that the government had expended so much energy and resources. The previous week, Parliament had voted to unseat her and President Mahinda Rajapaksa sacked her barely two days later.

Dr Bandaranayake did not (and still does not) accept her impeachment. It was widely expected, therefore, that she would report for duty at the Supreme Court on Tuesday. Several cases were listed to be taken up in Court 502. The other judges on the bench were to be Justices P.A. Ratnayake and S.I. Imam.

From the early hours of the morning, it was evident that the government had no intention of letting her through. In addition to ordinary policemen and STF personnel, the area was swarming with high-ranking officials. Among them was Brigadier Shantha Dissanayake, General Officer Commanding of the 14 Division including Colombo.

Asked why he was there, Brig. Dissanayake replied, “I’m responsible for Colombo. I want to see what’s happening from the ground.” Extra police contingents hung around, awaiting instructions. Some napped in three-wheelers parked near the Sanchi Arachchi Watta flats.

Initially, the police were “all business”. They made lines to block the entrances, at times holding hands in a chain. The STF stood to attention. But as the morning progressed, it seemed unlikely that Dr Bandaranayake would come. Reports said she was in the midst of vacating her official residence in Colombo 7.

Tiredness—and boredom—set in. The sun beat down. The media, who were present in large numbers, grew restless. A senior police official quietly passed a small digital camera to a press photographer.
“Putha,” he said, “take a nice photo of me. Make sure you capture me with the Supreme Court in the background.”

He walked back towards the barricades and tried to look busy.

At 10 am, around 150 people were led in a march to Hulftsdorp by Sri Lanka Freedom Party (SLFP) local government politician Mahinda Kahandagama. They shouted in support of President Rajapaksa and his new Chief Justice nominee, Mohan Pieris. One of them used a megaphone. They also applauded the Bar Association and its president, Wijeyadasa Rajapakshe.

Mr. Kahandagama told journalists it was a historic day. “The country has ushered in a new era,” he waxed. “The government has chased away the wrongdoers.” His followers surged onto the road, obstructing an entire lane of traffic. Instead of ordering them off the road, the police carefully directed vehicles around them.

The media were barred from entering the Superior Courts complex through the main entrance. This, too, was not the norm. Sunil Watagala and Srinath Perera—two lawyers from the Lawyers Collective, a union that had opposed the impeachment—invited journalists into the premises for a briefing. When they were obstructed, a heated argument ensued between the lawyers and police.

Mr. Watagala and Mr. Perera then attempted to address the media at the gate. The police prevented this saying it would impede vehicular movement. The lawyers were nowhere near the main road. Meanwhile, Kahandagama’s men again obstructed traffic in their efforts to intimidate and interrupt the lawyers.
A large number of attorneys soon exited the Superior Courts complex to offer backing to the besieged Mr. Watagala and Mr. Perera. Among them was Upul Jayasuriya, who is contesting for Bar Association presidency. Standing in the glaring sunshine, they lit candles and blew them out to signify that the “light of justice” had been snuffed out.

Inside the Superior Courts building, sittings had commenced. Cases were taken up in both the Supreme and Appeal Courts. There was no boycott. The passageway outside Court 502 was empty but for a handful of lawyers. On the bench were Justices Ratnayake and Imam. They postponed all of their cases and vacated the room because the Bench was not properly constituted (“Dr Shirani Bandaranayake CJ” had been listed to preside that day). It was now clear that Dr Bandaranayake would not come.

“The State has all the weapons,” reflected a lawyer who tarried outside 502 after the others had left. “There is a limit to how much you can fight the State. I think that limit was reached.” He requested anonymity.

“We don’t like what happened,” said an old attorney, who also wanted to remain anonymous. “But we can’t subject ourselves to ‘gal, mul prahara’.” The legal community was glad Dr Bandaranayake had avoided being humiliated by the authorities that day, said his younger colleague.

Asked why they had not organised a demonstration, he said, “We were not sure what was happening. The Bar Association had a meeting, but there was no decision to do something today.”

“In any case,” he scoffed, “the government is well conversant in street protests. We are lawyers and intellectuals. There are judges here. We have ethics and rules. We cannot stoop to the level of this government. We can’t act like Mervyn Silva.”
“But I can promise you one thing,” he continued. “All of us, including the provincial bar, are against what happened. We have all been affected by it.”
News then broke that Mr. Pieris had been sworn in as Chief Justice before President Mahinda Rajapaksa. The police stopped wilting. They stood to attention again. Security officers gathered round. The STF smartened up. The media gave up waiting for Dr Bandaranayake, and quickly gathered at the Justice Ministry gate.

Even as cameramen focused their lenses intently on the entrance, Mr. Pieris sped into the premises without so much as a wave. His motorcade disappeared into the car park, leaving journalists to remark how a fountain that had been broken for many months was now sprinkling water gaily into the air.
By Wednesday, all courts were functioning as usual. The State had managed to stamp out months of turmoil, one way or the other.