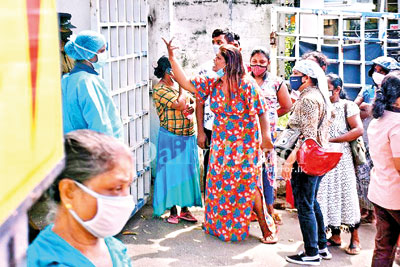 “Prisoners stoned on drugs stoned each other to death”
The Government finds itself in a tight corner this morn after an incident at the Mahara prison last Sunday between guards and prisoners flared into a major battle that lasted the entire night with the dust settling only on Tuesday when prison guards finally succeeded to bring the smouldering situation under complete control.

The rampant confusion over what sparked the violent riot and caused the ensuing carnage has still not cleared even after a week of baffling claims. Only two bodies of the 11 dead have still been identified.

The skirmish which began in the evening hours of Il Poya aggravated and continued unabated till 7 on Monday morning when prison officials with help from police riot squads and STF were able to assert some semblance of authority to partially control the prison revolt.

But as the morning light revealed the havoc caused the night before by rampaging prisoners, the magnitude of the riot became starkly self-evident. The Prison Superintendents Office, the Head Jailors Office, the archives, the stores, and the infirmary were damaged by the rioting prisoners. Some had even been torched and were still burning.

So who is responsible for this destruction, for this loss of imprisoned lives?

For the record, Dr. Mrs. Sudharshani Fernandopulle, the State Minister for Prison Reforms and Prisoners’ Rehabilitation who answered questions in Parliament as the responsible minister for Mahara Prison on Monday morning was done away with by evening when she was appointed to a newly created ministry and sworn in as the Minister of COVID-19, one of the most important ministries in the country today in the present context of the corona pandemic. In a her stead, to the prison ministry she had hastily left burning in flames, Lohan Ratwatte was appointed as the State Minister to douse the fire.

Whether the Government or one of its ministers failed to discharge this responsibility through neglect or otherwise only a tribunal of law or an independent commission will be able to determine after a perusal of the evidence at a future date.

But the evidence presently before the nation are the bodies of 11 dead prisoners and 106 inmates injured, the victims of a brutal riot that broke out last Sunday, on Il Poya eve at the Mahara Prison; and media reports of incredulous accounts by government officials and politicians of what transpired or what is supposed to have transpired under cover of night at this maximum security jail on the outskirts of the capital.

As for the hearsay accounts, first to read the esoteric light and decipher what had happened at the Mahara prison the night before was Wimal Weerawansa who, even though, as Industries Minister, it was not his business to add his tuppence to the subject matter of Mahara prison, added it nevertheless, and lectured the House on Monday on the origin and nature of the fatal riot. He said: ‘The Mahara riot was not due to congestion or overcrowding in prisons. According to an intelligence report, an underworld figure known as Chathuranga, a close associate of the slain underworld Don Samayan, held at the Welikada Prison and several other prisons had smuggled a drug known as ‘Saarth’ or ‘Reverse’ and carried out a trial run with several prisoners.’

‘When one uses the drug, Minister Weerawansa said, ‘he needs to see blood. These prisoners had attempted to distribute the drug as much as possible among the Welikada population and create a situation similar to cannibalism.’

He said, ‘Chathuranga’s handlers were a group of powerful drug traffickers. When their modus operandi became known, Chathuranga’ was transferred to another prison and several other prisoners were moved around. Unfortunately, the back-up plan of the Welikada Master Plan was orchestrated at the Mahara Prison. The riot was not caused due to prison congestion, but a planned event to cause murder inside a prison during the term of President Gotabaya Rajapaksa and bring international disrepute.’

However, Opposition Lawmaker Anura Kumara Dissanayake said despite claims of an unknown force, there is reason to believe over-crowding of remand prisoners who have been in remand for more than 11 months due to the non-functioning of the court as well as fear of contracting COVID-19 resulted in the riots.

It was the turn of the Mahara Prison’s Commissioner (Control) Chandana Senanayake next. Addressing a media conference on Tuesday, he said: ‘around 1600 suspects broke out and rushed out making a huge commotion, demanding PCR tests to be carried out on them. There were already 187 COVID cases in the prison. A delegation met the prison authorities and their demand was agreed to. But then they had attempted to surround the prison officials who had deftly made their exit. Then the suspects had hurled a massive amount of stones at the officials. They were repeatedly warned not to advance but as they ignored the warnings, the officials were forced to fire rubber bullets. Then they broke the prison’s medical stores and swallowed all the tablets thereat. After they had taken these pills, they turned extremely violent. Then they murdered each other, they hit each other, they fought each other, they cut each other. They took two officials hostage but we managed to get them back. Those who were involved are drug users, drug addicts, drug traffickers and they are among the dead, too.‘

The last word on the matter that day was left to police spokesman Ajith Rohana. He said: ‘At this prion’s medical store there were roughly 21,000 pills normally given to mental patients. Those who had been addicted to heroin and cocaine were believed to have used these tablets prescribed to mental patients. Out of those injured 80 are believed to have received wounds fighting amongst themselves. Only 26 have received gunshot injuries.

Meanwhile outside the prison gates, relatives of those inside lined the street, keeping vigil for the slightest news of their loved ones. Mothers, wives, daughters, their faces furrowed with worry could hardly stop their tears cascading as they staked the prison perimeters awaiting any morsel of information on their sons, husbands and fathers remanded inside. Their presence was a constant reminder to all, that those imprisoned behind the imposing walls were human beings and not some wild jackals gunned down mercilessly recently in Horana suspected of being rabid.

The Government, to its credit, have acted fast to exercise damage control over the incident. The Justice Ministry announced earlier in the week the appointment of a 5 member committee chaired by retired High Court Judge Sarojini Kusala Weerawardena. Two other probes, one by the Police, the other by the Prison’s Minister have also been ordered.

Good. The week-long Mahara’s grotesque saga hasn’t still ended. 9 of the 11 dead are still to be identified. It’s a bizarre tale of remand suspects suddenly going berserk, of mass pill popping which make them see blood and make them want to eat each other, of pole, stone, punch throwing, and all who died or were injured or participated in the riot being involved with drugs. The story so far advanced is of a drug intoxicated, blood lust driven, cannibalistic prison revolt.

On Thursday the International Commission of Jurists (ICJ) called upon the Sri Lankan authorities to conduct a prompt, thorough and impartial investigation into the events involving the use of lethal force by prison guards at Mahara prison on 29 and 30 November.

“The action by the guards was taken in response to unrest resulting from protests by inmates over unsafe and overcrowded conditions in the context of the COVID-19 pandemic. The tragic events of Mahara prison are a consequence of the failure of the Sri Lankan authorities to effectively address the situation of prison conditions,” the global jurist body said in a statement

If, as Mahatma Gandhi once said, ‘the greatness of a nation and its moral progress can be judged by the way its animals are treated,’ then the degree of Lanka’s greatness and how far up the moral ladder it is presently positioned in its treatment of animals, can be precisely gauged by first casting an open eye on the scandalous way it treats its citizens when they are flung into dark, decrepit, jam-packed, hell holes called jails.

Shut out from civilized light and denied a tear drop of blessed mercy, these transgressors of the legal precepts must atone beyond the call of Nemesis for their sins this birth itself, having no deified intercessors to pray for a postponement of their prescribed penance to a future birth. These condemned black sheep of the social flock to whom the fates hadn’t dealt a fair hand, are left to rot forgotten in deplorable, wretched, unhygienic, unspeakable conditions, unfit even for the lowliest beast.

To those condemned to these purgatorial nadirs of human existence, to these dungeons of hell where depravity breeds in earnest, and vice an ever ready friend to new comers, there is no redemption through atonement, no rehabilitation through incarceration and no return from the twilight zone of the blackest villainy.

To the majority of their fellowmen, some of whom are god darn lucky not to be behind bars today due to the blessed quirks of fate and strut on the streets of fame and fortune as society’s paragons of virtue, the ghastly lot of the condemned prisoners are far too disturbing to bear; and the far removed the wretched are from their sight, it makes it all the more easy to keep them far removed from their mind. They are exiled from society’s concerns even as the law has exiled them beyond the pale to languish behind prison walls.

But though some may view them as downright scums of the earth to whom soft prison sentences are far too lenient as punishment for the heinous outrage committed on the victims; though some may demand they must be drawn and quartered and their flesh thrown to dogs as the only fitting punishment for their monstrous crimes, they can only be killed through judicial hanging.

Thus there is an iron duty imposed upon the government to be responsible for their protection throughout their tenure at government prisons, be they convicted criminals or suspects on remand awaiting trial. It is a duty imposed under international law after Sri Lanka ratified and brought into force in 1980, the International Covenant on Civic and Political Rights which also incorporates the rights of prisoners. It is also a duty imposed by the law of the land with the new found existence of the ‘Right to Life’ for all Lankan citizens as confirmed by the Supreme Court early this year.

Though it is a right not specifically embedded in the Lankan Constitution, the Supreme Court, in a landmark judgment delivered in February this year held in Tharanga Lakmali v Niroshan Abeykoon, that the extra-judicial killing of a suspect in police custody violated the right to life.

The Court further held ‘that right must be interpreted broadly, and the jurisdiction conferred by the Constitution on this Court for the sole purpose of protecting fundamental rights against executive action must be deemed to have conferred all that is reasonably necessary for this Court to protect those rights effectively.’

Thus the Right to Life exists for those outside prison walls as well as for those behind bars. As the Supreme Court held ‘it is the State’s responsibility to protect every citizen of this country.’