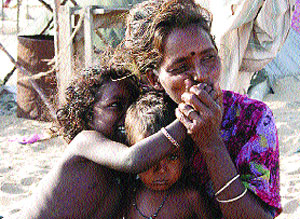 * Too much attention on infrastructure development, urbanisation, tourism
* Much more can be done for rural economy, poor

A network of citizen groups has sent in its proposals for the 2013 budget to the President, asking the government to give more weight to developing a macroeconomic and political strategy which would uplift the rural economy, marginalised communities and urban poor, instead of pursuing a course favouring infrastructure development, urbanisation, tourism and financialisation.

Organised in to the Active Citizenship for Development Network (ACDN) their recommendations cover four sectors of particular concern to their larger communities; agriculture, fisheries, estates, and state education.

“Over the past year there have been mobilizations of farmers, fisher-people, plantation workers; and university students and academics around issues of concern to them. These actions and protests should be viewed as a form of engagement with the state in defence of their interests – particularly in a context where the opportunities for peoples’ participation in budget-making at local, provincial and national-level are so limited,” the ACDN said in a statement.

“Will the 2013 Budget respond to these engagements by shifting from the neoliberal economic trajectory favouring infrastructure development, urbanisation, tourism and financialisation; towards a macro-economic and political strategy that supports the rural economy, and marginalised communities including the urban poor?”

The problems faced by these groups range from the impact of drought on crops and low farm-gate prices for their produce; to the high cost of diesel and kerosene, sea-grabbing for tourism projects and poaching by Indian trawlers; to the poor housing, education and social infrastructure on estates and their landlessness; and finally, the woeful underinvestment in state education from pre-school through to tertiary-level.
ACDN member organisations – that is, the Centre for Society and Religion (CSR), the Law & Society Trust (LST), the National Fisheries Solidarity Movement (NAFSO), and the Uva Community Development Centre (UCDC) – have taken up these issues in the formulation of the following proposals:

Agriculture:
= Organic fertilisers to be promoted through transferring at least Rs10 billion in subsidies on chemical fertilisers, and accompanied by necessary extension facilities for ecological farming from relevant ministries.
= Social security for farmers and their families through resourcing the Farmers Pension and Benefits Scheme.
Fisheries:
= Diesel subsidy of at least 25 percent and Kerosene subsidy of at least 30% for fisher-folk to offset cost-of-living increases.
= 25 percent increase in stocking fingerlings to sustain and promote freshwater fishing.
Estates:
= 7 perches of land to be allocated to each estate household as promised prior to privatisation of plantations; and the 37,000 hectares of unutilised estate lands to be distributed to estate residents for own cultivation.
= Pradeshiya Sabhas should be legally obliged to provide their development and welfare services to estate residents through amendment of Act, No 15 of 1987.

Education:
= Increase availability of advanced-level education in at least 238 more rural and estate schools, through an immediate 10 percent increase in allocation, within the medium-term framework of allocating 6 percent of GDP for education.
= Provide substantial and specific allocation for investment in estate sector schools that previous Budgets have ignored.

“These modest and reasonable proposals can be resourced if there is political will to downsize the defence sector that is projected to increase by 26 percent in 2013; curb external loans and therefore rising debt-service payments that amount to US$1billion; and strengthen, instead of undermining, provincial and local government including through revenue-raising; exercise of powers over land-use and law and order; and building on the 13th Amendment,” the ACDN said.