Govt. denials will not make problems posed by Pillay go away 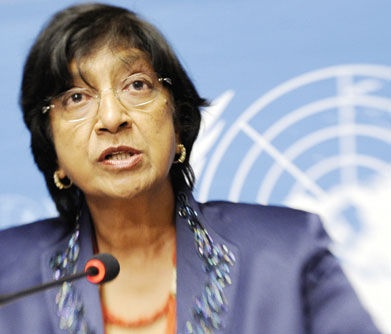 Jehan Perera
The government has rejected the public statement issued by the UN Human Rights Commissioner, Navanethem Pillay on her departure.  This rejection has been accompanied by a demonstration of anger. This is evident in the statements issued by responsible government ministers.  The President is reported to have reacted angrily to the UN statement. Sri Lanka’s External Affairs Minister Prof G L Peiris, whose intellectual powers are second to none in the world, made a point by point rebuttal of Ms Pillay’s conclusions at a media briefing in London.
He had said that “the report she had produced was indicative of a prejudiced mind and in no way showed the fairness and open mindedness of an official undertaking such a mission.”

It is said that we often do not see ourselves the way that others see us. Minister Peiris’s statement indicates that the government is in strong disagreement with the UN Human Rights Commissioner’s conclusion that the government is heading in an authoritarian direction in the aftermath of the war.  Indeed, the elimination of the LTTE as an armed opposition offered the country a great opportunity to restore democratic governance.  However, with the passing of the 18th Amendment to the Constitution, which even some government members criticized, the country has clearly taken a decision in favour of a radical centralization of power.  The acute, if not excessive, centralization of power in the hands of the President, his family members and a few close associates is no secret.

That the government is heading in an authoritarian direction is an opinion that is held by the main opposition parties, civil and religious society and even by sections within the government itself who speak privately about their misgivings.  On the other hand, Prof. Peiris has chosen legitimately to focus on the large number of elections that the government has chosen to have in recent times.  Not only has the government held many elections at local and provincial levels, it has been successful in winning them too in elections that have been reasonably free and fair by third world standards.  Unlike in countries such as Zimbabwe, the government has not used violence to stuff the ballot boxes or to frighten voters away from the polling stations.

The latest round of elections is to take place on September 21, and will be elections in three of the country’s nine provinces.  This will include the first ever election to the Northern Provincial Council.  This election is being eagerly awaited by those sections of the international community who have taken a special interest in Sri Lanka.  The holding of these elections can be considered to be the most important opportunity for vindicating the political rights of the Tamil people through a gradual and democratic process.  The establishment of an elected Northern Provincial Council will vest a reasonable measure of self governing powers in the hands of elected Tamil representatives.  The people of the north are being provided with the opportunity to vote and select those they wish to govern them.

The complexity of the political situation in Sri Lanka is reflected both in the criticisms of the government contained in the visiting UN High Commissioner’s statement on the one hand, and in the generally positive assessment of post-war developments on the ground by visiting foreign governmental delegations on the other hand.  This may be partly on account of the Sri Lankan government taking them on conducted tours.  But, the fact is that what they see is positive, be it the impressive infrastructure developments or the sense of freedom that they see in daily life in most of the country.  Again, in comparison to many other countries, particularly those emerging after long periods of conflict, life in most of Sri Lanka is of a reasonable quality and is improving.

It is also a fact that the elimination of the LTTE as a military force has given the Tamil people a freedom they did not have before.  If the LTTE had been still around as a physical entity, highly respected and admirable Justice C V Wigneswaran and his colleagues in the TNA would have been able contest the forthcoming provincial council elections, which they are most likely to win.  This simple and profound observation was made at a seminar conducted recently at the Marga Institute to discuss former ambassador to the UN Human Rights Council, Dr. Dayan Jayatilaka’s latest book on “Long War, Cold Peace” which was commented upon by the doyen of Sri Lankan civil society Dr. Godfrey Gunatilleke.

However, the positive features of Sri Lanka’s democracy and its expansion to include the Northern Province, must not detract from the essential truths that are contained in Ms Navanethem Pillay’s departing statement. Her criticisms of Sri Lankan government policy, and governmental actions, are valid and based on facts on the ground.  These include her concerns over the continued high level of military presence in the North and East, the further entrenchment of the military in the form of its expansion into areas of the economy, such as building and running hotels, which ought to be left to the private sector, and the failure of the rule of law when it concerns those in government or supported by government, such as attacks against minority religions.  These are also concerns of the opposition political parties and civil society.

It is important for the country’s future and the government’s own long term success that it can transcend its present inability to see itself and its conduct as others see it.  It is unfortunate that government leaders deny that there are major problems of governance and human rights which the Opposition political parties, civil society and the  international community are together saying there is.  The breakdown of the rule of law within the country will invariably lead to a situation where persecuted groups will feel justified in looking elsewhere for justice including the international community.  An example of serious denial is the government’s claim that there is no problem of violence against religious minorities.  While the problem may not be large scale, it exists at the local level, not all over, but in some places, and is creating apprehensions in the minds of the religious minorities.

Mosques and churches have been attacked, the perpetrators have been filmed, the evidence given to the police, but no action has been taken to arrest the perpetrators.  There is a strong ethnic majority nationalist campaign that has both tacit and explicit government backing.  This takes the form of speeches by leading government politicians and they are widely reported in the state and private media. The power of the government’s propaganda machine may enable it to convince itself and the majority of the electorate that what it provides is better than what anyone else can do. To the extent that the government is driven by pragmatic political calculations, a source of countervailing power that is sought internally will be the international human rights community who insist that the government should conduct itself in accordance with international standards of human rights.