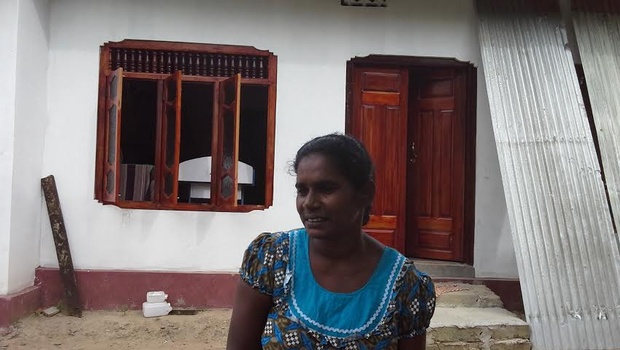 KILINOCHCHI: Former cadre of the Liberation Tigers of Tamil Eelam (LTTE), who had surrendered to the Sri Lankan army and undergone a year’s  ‘rehabilitation’ in special camps, are manifestly eager to get back to normal life, forgetting their past.

But lack of active interest on the part of the political leadership; the bureaucracy’s apathy; and above all, the Security Forces’ continued lack of faith in them; are preventing their return to normalcy. State actions ensure that eminently forgettable memories of the conflict are kept alive even though the war ended seven years ago.

The on-going struggle to find their feet and secure citizenship rights keep taking them and their families back to the traumatic past, leaving them with little or no hope of relief, according to Ranjini, a disabled and discharged cadre of the LTTE, who is now a widow, single-handedly bringing up her 10 year old girl child in Selvapuram in the outskirts of Kilinochchi in North Lanka.

Selvapuram has 163 widows and the Kilinochchi Assistant Government Agent (AGA) division, of which it is part, has 1800 widows. Some households are headed by widows.

Ranjini surrendered to the Lankan army with her 38 year old husband and serving cadre Sudhan, and her then two and a half year old daughter, Blessiya, at Pudumaatalan in Mullaitivu district on April 24, 2009, less than a month before  Eelam War IV ended.

Predictably, Sudhan was isolated from her as he was a senior leader in the “Radha Vaan Padai” (the anti-aircraft unit of the LTTE), and kept in a special detention center. But in December 2009, Sudhan was declared dead “after a heart attack.”  Ranjini did not believe that he died a natural death. But had no option but to accept his death and move on.

“Some asked me to file a case, but I had no money to do that. I decided to carry on with my life as I needed to bring up the child,” she said sitting in the compound her yet unfinished house.

Ranjini’s agricultural family, back in her native Akkaraipattu in Amparai district in East Lanka, is indigent and also traumatized by the conflict. Her father was killed by the anti-LTTE “Three Star” group, and her brother, who was a member of the LTTE’s medical unit, was arrested and detained at Boosa, a special prison for terror suspects.

Ranjini completed the rehabilitation process and was released without fuss, probably because she was not an active cadre at the time of arrest. She had been discharged from the LTTE way back in 2000 following a series of disabling battle injuries.

Recalling the war years she said: “On April 14 ,1991, in a battle at Poovarasankulam near Vavuniya, a shell hit my stomach and the intestines popped out. In 1995, I was in coma for 13 days at the Jaffna hospital.”  With the result, she limps, and can use only one arm.

Once released, Ranjini faced governmental apathy, which continues to this day. Used to being looked after by the LTTE as an ex-cadre, she found it hard to manage with her physical disabilities and no income to boot.

“To repair my house and set up this poultry farm I had to go to a state-owned bank 13 times, spending 14,000 rupees on autorickshaw fares alone. But while the government gave no financial help to repair this house, UN Habitat gave me LKR 2.2 lakhs. Northern Province Chief Minister C.V.Wigneswaran arranged to give LKR 1.95 lakhs. Tamil National Alliance MP, Mavai Senathirajah, also arranged some funds. The NGO AFC, gave funds to set up a small poultry farm, which is the source of my income,” she said.

Ranjini was disappointed that TNA’s loudest campaigner for the rights of the disappeared cadre, Anandhi Sasitharan, took no interest in her case.  She would not even take her calls.

Now, Ranjini’s sole aim in life is to give her daughter an education “to enable her to stand on her own feet” as she put it. She cannot send her for private tuition for lack of money. But having studied up to GCE Ordinary Level, she teaches the child.

While the State believes that constant surveillance is necessary to prevent ex-LTTE cadre from returning to militancy, Ranjini thinks that such surveillance only chains the cadre to the now unwanted past.

“ When my wish is to erase the past and chalk out a new life, I have to submit all my past documents to the concerned security agencies three times a year. I have to put up with frequent and un-announced visits by the CID and other surveillance agents. They keep inquiring about my past and the present. They ask about my dead husband. All this not only prevents me from forgetting the past, but affects the mind of my child.”

“ When the CID men go away, I have to answer the inquisitive 10 year old’s questions about the visit, and the past, and explain why she, unlike other children, has no father.” Ranjini said.

Asked about the impact of all this on the child, she said: “ When we were in the killing fields of Pudumaatalan and subsequently in the refugee camp, Blessiya  was only two and a half. She would have forgotten all about that but for the frequent inquiries by the security agencies which keep recreating the unpleasant images in the child’s mind.”

The police do not leave her family back in Akkaraipattu alone either, Ranjini said.

“They question them about me, when in fact they have nothing to do with me. I have told my family not to talk to them but to ask them to come here and meet me,” Ranjini said.

The CID had once entered her compound without her permission and when asked why they did so, they said that the gate was open.

“Very annoyed by this reply, I asked if the house door was open, would they have entered the house too?” Ranjini said.

Justifying her tough stance, she doughty fighter said: “If you run away from a challenging situation like a coward, even a rat will chase you!”

No Ill-Will Toward Sinhalese

For all the communal hostilities generated during the conflict, when the only Sinhalese she ever saw were soldiers who were trying to kill her before she could kill them, Ranjini harbors no ill will against the Sinhalese people.

“I had good rapport with the female Sinhalese staff in the refugee camp, a far cry for a person who had joined the LTTE in 1989 after personally witnessing the violence unleashed against the Tamils by the army. When I was leaving the camp, the Sinhalese women staff became emotional and hugged me,” Ranjini said.

Asked  if she minds Sinhalese coming to the Tamil areas in the North to settle and take up jobs there, she said: “ We cannot condone occupying lands belonging to the Tamils or settling Sinhalese in a planned way as government policy. But just as we Tamils go to the South to work and stay there as individuals, the Sinhalese too should be able to come, live and work here. They are also human beings!”
NIE