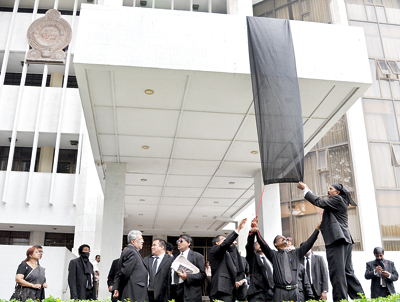 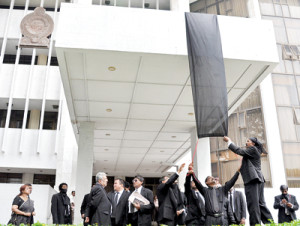 Status Report of Lawyers Collective
The letter of removal of the Chief Justice was received by her on 13th January 2013.
The President has summoned judges of the Supreme Court, Court of Appeal and High Court 13th, 14th and 15th January respectively. There is no Constitutional tradition in Sri Lanka authorizing the President to do so. In the present circumstances, the Judges are compelled to meet the President ignoring the constitutional tradition.

At the meeting the President had been very critical of the protests of lawyers and had also made false allegations that the lawyers’ who had protested had received foreign funds to do. The Presidential media unit thereafter circulated a video clip prepared by them to all electronic media institutions, which was telecast today. It contained damaging and adverse material on the unity of lawyers, suggesting that the Bar has not been part of the protests. It has also failed to state that thousands of lawyers who participate at the protests are active members of the BASL.

a) The entire impeachment process was unconstitutional and the Hon. Shirani Bandaranayaka remains the Chief Justice. Whatever the decision she takes tomorrow (15th January) the Lawyers’ Collective stands by her.

b) The initial struggle by Lawyers led by the Lawyers’ Collective was to prevent the impeachment. The next phase would be a broader but long term struggle involving clergy, political parties, trade unions, intellectuals, academics, students and civil society groups.

c) The Lawyers, Judges and civil society activists who have stood up for the Independence of the Judiciary and against the unconstitutional impeachment may be subjected to victimization in future. The Lawyers’ Collective along with its network would not hesitate in making appropriate interventions, if such victimizations take place.

d) The Lawyers salute the Chief Justice for her courage. The Lawyers’ Collective also commends those who took a public stance for justice courageously notwithstanding an unprecedented hate campaigns and threats, unleashed by the Government.

Mr. Mohan Peiris’ name has been forwarded to the Parliamentary Council, which is expected to meet tomorrow (15th January) at 10.00 a.m. He is also expected to take oath immediately.

Vicious hate campaign against the lawyers who stood up against the impeachment continues to date. There is information that in addition to the state media, several groups connected to the government are engaged in a defamatory campaign against identified lawyers, making their life and professional practice vulnerable.