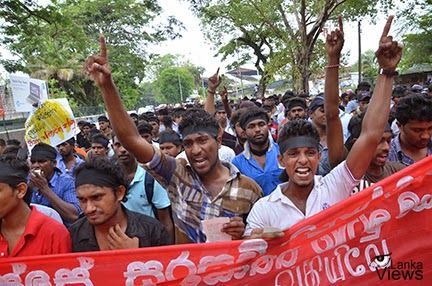 A protest march from University Grant’s Commission to the Temple Trees, headed by the Inter University Students’ Federation was held on 7th May 2014 with the participation of thousands of students. The protest demanded for the reinstatement of the four year Allied Health Sciences degree and dropping the unjust suspensions against 27 student activists of University of Rajarata. It is reported that preparations are being made to arrest the student leaders who headed this protest.
On the previous day, the police had taken measures to obtain a restraining order against the protest march in the Fort Magistrate Court. Media reports claimed that the restraining order was taken due to the World Youth Conference that is being held in Colombo. The government is now attempting to arrest the students based on this restraining order.
We believe that this move by the police raises critical issues with regards to not only the student community’s right to organize and freedom of expression but also that of the broader masses. AHS students and Rajarata students have been organizing and participating in sit-in actions at Anuradhapura, Peradeniya, Galle and Colombo Fort for more than 150 days demanding solutions for their problems. The rulers have not given any solution to these problems. When the rulers adopt education policies in violation of the students’ right to education, students are left with no other option than to organize against such policies and express their dissent. In a democratic society masses must be entitled with the right to organize in order to protect their interests and freedom of expression.
However, in the recent past we noticed a pattern of the government obtaining restraining orders to obstruct such protests and rallies. A similar protest march was organized by the IUSF on the 19 the of March from the University of Kelaniya to Colombo and a similar court order was obtained against that as well. Do these students, who are victims of gross injustice, have any other option other than to express their dissent through peaceful demonstrations? If the government is violating the right of the people to peacefully protest in the guise of Youth Conferences or any other reasons, should we not identify it to be an assault on the democratic rights of the people.
The right to dissent and the right to express that dissent are inalienable rights of the people. The repression that is levelled against the students’ movement today will rise against every other struggle in the coming days. We have already seen how the government uses this violence against people’s struggles, in Katunayake, Rathupaswala and Chilaw. Therefore we plead with every force, organization and force that appreciates values of democracy and freedom to condemn this repressive behaviour of the government and to fight unwaveringly to defeat these efforts. 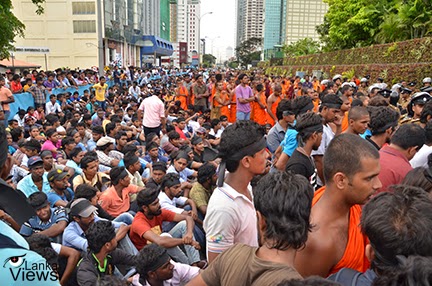 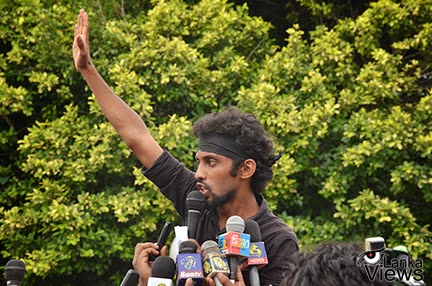