Gotabhaya Rajapaksha: Too Drunk with Power to Exercise it? 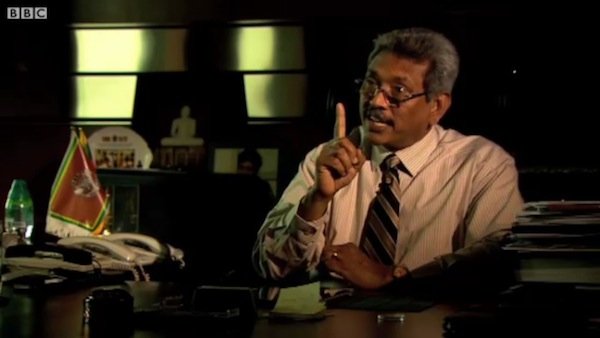 FJ: Mr. Rajapaksa are you threatening me?
GR: Yes! I am threatening you! Write every single word I have told you if you want – you write a bloody f…..g word and we will see…

FJ: Mr. Rajapaksa I called you as a journalist to inform you of what was happening and get your version but all you have done is abuse me in raw filth…

GR: Yes I threatened you. Your type of journalists are pigs who eat shit! Pigs who eat shit! Shit, Shit Shit journalists!!! Ninety percent of the people in this country hate you! They hate you!!! You come for a function where I am and I will tell people this is the Editor of The Sunday Leader and ninety percent there will show that they hate you.
GR: But I will put you in jail! You shit journalist trying to split this country – trying to show otherwise from true Sinhala Buddhists!! You are helped by the US Ambassador, NGOs and Paikiasothy – they pay you!!!
FJ: I wish.
GR: You pig that eats shit!!! You shit shit dirty f…..g journalist!!!
FJ: I hope you can hear yourself Mr. Rajapaksa.
GR: People will kill you!!! People hate you!!! They will kill you!!!
FJ: On your directive?
GR: What?? No. Not mine. But they will kill you – you dirty f…..g shit journalist.

The above excerpts need no elucidation. They are from two telephone conversations between the Defence Secretary Gotahbaya Rajapaksha and the Editor of the Sunday Leader Frederica Jansz as reported in the Sunday Leader of 08 July 2012.

This columnist is mentioned in the second conversation. This is not however, the issue I want to highlight in this column. The issue I want to highlight is the behaviour of the Defence Secretary, a senior government official at the apex of power and given the dynastic structure and the nature of power, arguably the most powerful individual in the country. Over the last seven years in which he has held this position he has a record of abusive conduct in the media and against the media. This is not the first time he has threatened a newspaper editor – the last time was in 2007 and it involved another female editor. He has gone ballistic on international media on more than one occasion and likewise, strayed beyond his ken to venture policy pronouncements and spew out disparaging and derogatory comment with impunity.

I have called for his resignation or sacking on three occasions- the first in 2007. I do so yet again. The Defence Secretary is reported as telling an editor of a newspaper in the foulest of language, that people hate her and will kill her. The quoted transcript is clear as to where his sympathies lie. In effect, his remarks foster a climate of hate and hurt and harm against Ms Jansz. It is an egregious violation of even that much -sullied pretense at governance and reconciliation we as a country are treated to on a daily basis. Should we be paying a public official to threaten newspaper editors or indeed any of our fellow citizens?

There are those who maintain that this is nothing egregious but rather attitude, language and behavior that epitomizes the current dispensation. Others maintain that this should not be taken seriously – the Defence Secretary, war hero to boot, is hot–headed and we all have our bad days, limited and abusive vocabulary!
The latter category, are clearly apparatchik apologists or just plain terrified to think or say otherwise. The former category may well be correct about the vulgar and abusive character of the dynastic project, but their cynical acceptance of this incident may well also mask fear and their unwillingness to take exception is probably the most frightening thing about this whole episode when judged from the perspective of democratic governance. I had the opportunity, a year ago, to remind an audience of the words of Montesquieu – the tyranny of the oligarch is not so dangerous to the welfare of the public as the apathy of a citizen in a democracy. This is the challenge confronting all of us individually and collectively with regard to this incident, as well as many others that the media dare to report.

Is the Defence Secretary a power unto himself? What will his president/our president, his minister, his brother do about his behavior, which, whether he can help or not, is just not acceptable in any decent, democratic society. Apart from anything else, this is so egregious a violation of the Mahinda Chintana first edition and of the subsequent Idiri Dekma version! Does this country owe Gotabhaya Rajapaksha so much for his role in defeating the LTTE that his horrendous and appalling behavior should be dismissed as inconsequential, condoned by silence and nourished by impunity?

There should be a groundswell of public opinion calling for his resignation or removal. Those of us who do will be told that he will be in his position as long as his brother occupies the seat of power and that he probably will be a repeat offender and an even more powerful one at that. No point therefore in making a point about him, now or ever. He will live and die in power.

The temptation to quote Pastor Niemoeller and on an issue in any way connected to the Sunday Leader notwithstanding, is it not time that we as a society stood up against such atrocity at the very heart of the regime? Across the water, the media would surely have decided to boycott official events presided over or attended by such an individual and if not, most definitely have raised a mighty chorus for his resignation or removal? Parents surely would have robustly expressed their disapproval were he to be invited to any official function involving their children?

Ms Jansz’s fellow editors have yet to rise to her support and in condemnation of this chilling exchange. The same applies to our great and good, the denizens of our society in their guilds and fora and congresses. They are yet to bring to bear their not inconsiderable collective authority, secular, moral, temporal and spiritual, in even the mildest censure. Perhaps they will. In a while…

They must; we must. Even if we cannot transform the ugly and nasty in our midst, we must surely recognize it for such. We will be further removed from even the pretense of civilization and decency if we accept and condone it as merely commonplace.
GV