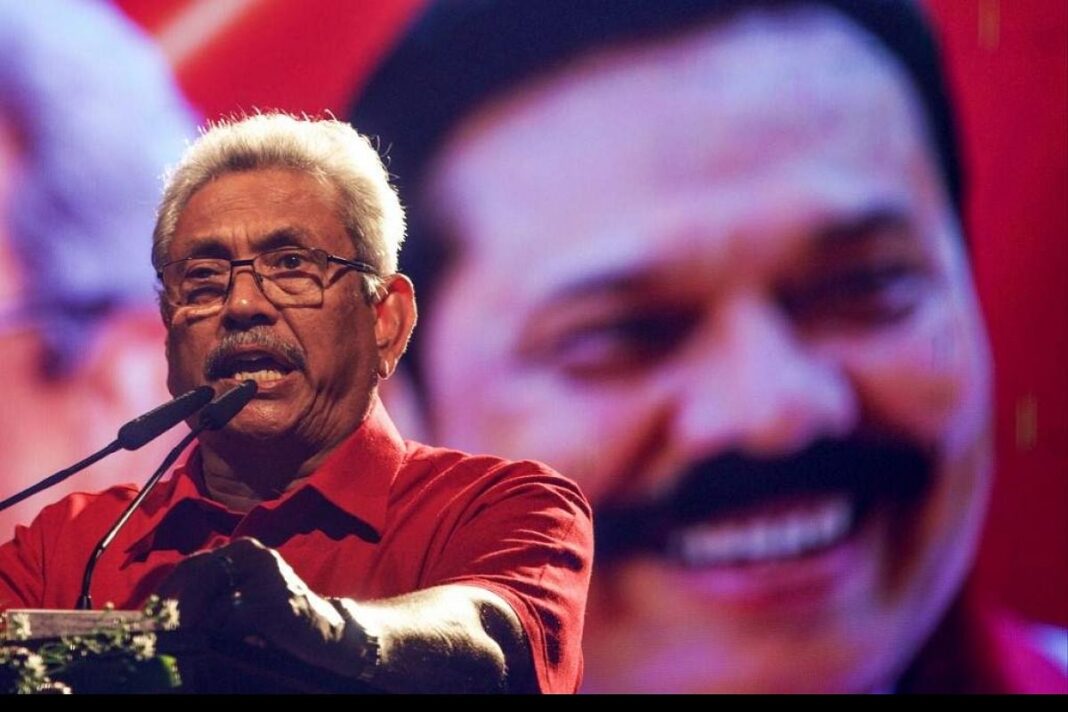 The best political satire I’ve seen in recent months doesn’t contain even one clever punchline. It is a new genre, a cross between a silent movie (no dialogue), a news documentary and reality TV. It is shot from within a four-wheel drive, which moves at a moderate pace on a single continuous but short trip, with the camera focusing on the sidewalks with unending lines of grim-faced and often vociferous citizens, waiting for gas, kerosene, milk, etc. From inside the vehicle, the speakers blare Gotabaya Rajapaksa’s campaign song. When the chorus comes along, young voices inside the vehicle join in, and yell out in unison “Goh-taa-bhaya!”. A passenger in the front seat, who isn’t yelling, laughs and places his palm on his forehead after gazing at the queues. It is black humour at its best.

You’ve heard of the classification and category ‘backsliding democracy’. Democracy isn’t the only thing that’s backsliding in Sri Lanka. So too are farming, cooking and nutrition. When Andre Gunder Frank wrote of the “development of underdevelopment”, he didn’t know the half of it.

In his chat with the newspaper editors, President Gotabaya spoke critically of the media coverage of the explosions of gas-cookers, without once acknowledging the report of his own panel of experts who traced the cause to the change in ratio of the gases. Who is accountable?

Going by his declaration of intent, the President initially hopes to move forward with those Sinhala Buddhists who are not suffering the same economic hardships as the rest of the citizenry. That would range from the uber-rich ultra-right, to the military brass.

Though I did work with Immanuel Wallerstein, the iconic thinker on world systems and world economy, I’m no economist. However, I am a student of conflict, revolution and wars, and I know of far fewer internal conflicts triggered by debt and forex crises and far more detonated by the collapse of harvests and resultant famines or extreme food shortages. This is more so when those crashes of harvests, the resultant shortages and mass misery are seen as avoidable and ruler/ruling elite-created.

There are countries which have experienced crisis due to debt repayment, a hard-cash crunch or sanctions, but almost all of them have peasant agriculture to fall back on. Russia faced Western sanctions by boosting agricultural productivity, and it was certainly not through conversion to organic fertiliser but through redoubled efforts in scientific agriculture. If it was the cash crunch that triggered the cutback in fertiliser imports, contracts should have been given to local and foreign industrialists to produce chemical fertiliser, pesticides and weedicide in Sri Lanka well before embarking on this program of ‘agricide’ (or ‘peasanticide’) through a ‘shock-and awe’ ban.

There is a possibility of defeating the regime in 2022, which doesn’t necessitate the interesting proposal of lawyer Sunil Watagala of the JVP, of the early dissolution of Parliament, nor does it depend entirely on ceaseless street demonstrations over economic grievances.

That possibility will be provided by the President’s project of a new Constitution. It will be perfectly possible to call for and win a massive ‘No’ vote at a referendum in this year of the avoidable economic torture of the citizenry. Not even Augusto Pinochet was able to survive defeat at a Referendum.

The Spanish term “querencia” refers to the patch of ground that the besieged bull stakes out in the bull-ring during a bull fight. It is the place where the bull makes his stand and from which he charges. More generally, “querencia” has come to mean a spot from which a personality chooses to make his/her stand. Besieged President Gotabaya Rajapaksa has just demarcated his querencia, and there are no surprises as to the space he has demarcated and has chosen to place himself. It is his home-ground.

He also gives a valuable clue as to his future intentions.

The evidence is in the text of his speech of 2 January 2022 at the ceremony to confer honorary title of “Sri Lankadheeshwara Padma Vibhushana” on President GR by the Kotte Sri Kalyani Samagri Dharma Maha Sangha Sabha.

“…I would like to specially mention the fact that I was born into a Buddhist family, the disciplines I received when I was studying at Ananda College, Colombo, one of the leading Buddhist schools in the country, the inspiration I received from following the advices (sic) of the Maha Sangha and the discipline I received from serving in the Army were the factors that made my life better.

“Today the Maha Sangha bestowed on me an honorary title in recognition of my service towards the country as a military officer and Secretary of Defence. During my twenty years of military service, I had been involved in military operations carried out in the initial stages of the Eelam War and Second Eelam War as well as operations carried out in the north and east areas. Before the arrival of the Indian Peace Keeping Force, I commanded one of the four brigades in the Vadamarachchi operation, the largest operation of the time. At the outbreak of the Second Eelam War, I commanded one of the two main brigades to liberate Jaffna Fort. I carried out several operations in areas like Welioya, Vavuniya and Trincomalee. In recognition of those services, I received the Ranashura and Ranawickrama medals and President’s Award. The Maha Sangha is fully aware of the service rendered by me directly as the Defence Secretary to the end of the thirty years of war.

“…On the day I was sworn-in as the country’s President at the Ruwanweli Seya, I declared that I was a President elected by the majority of Sinhalese. I firmly believe that the protection of Sinhala Buddhists, who have made so many sacrifices to elect me as the first citizen of this country and that heritage is my foremost responsibility…” (Ada Derana/PMD)

Here comes his crucially significant signal as to the strategic direction he has decided to move in:

“I am ready to embark on a new journey by overcoming the obstacles we have encountered so far, and to fulfil the aspirations of the people who elected me as President of this country. I responsibly declare before this Most Venerable Sangha community that I am ready to take any tough or bold decisions that need to be taken in this regard…” (Ibid)

Or could it be an enhanced role, perhaps even the ultimate enhanced role, for the sword and shield, if not the martial custodian, of that “heritage” and those “aspirations”, i.e., the military?

What the speech tells us is that the President is sticking to his hard-core Sinhala Buddhist discourse and base. The obvious problem with playing this card is that most of the angry rice farmers are Sinhala Buddhists, as are most in the queues for milk-food, cooking gas and kerosene. They are mad at him and the ruling elite (starting with the ruling family), and they are angry not as Sinhala Buddhists but as human beings. The President must understand at least now, why the Buddha advised against preaching the Dhamma to those with an empty stomach.

How does he hope to do this? There are some clues in his words: “…a new journey…to fulfil the aspirations of the people who elected me as President …I am ready to take any tough or bold decisions that need to be taken in this regard…”

What kind of “new journey” and “tough and bold decisions” might he have in mind? Given the President’s known agenda, it is reasonable to assume that in the first instance he means the new Constitution, in which the primacy of Sinhala Buddhist identity and heritage will be given unprecedentedly hegemonic status, thereby either flipping the Sinhala Buddhists from economic grievances back to an ethno-religious majoritarian consciousness, or at the least, causing a split among the Sinhala Buddhists on the lines of economics versus ethno-religiosity.

Or could it be an enhanced role, perhaps even the ultimate enhanced role, for the sword and shield, if not the martial custodian, of that “heritage” and those “aspirations”, i.e., the military?

I do not know whether Minister Basil Rajapaksa is to be made Prime Minister as is rumoured in the media. Given that Mahinda Rajapaksa is the sole sentimental adhesive keeping the coalition and even the ruling SLPP going, that may not be on the cards. What I do know is that Basil Rajapaksa’s territory of economic development is already being invaded. In his address of 30 December 2021 to the tri-forces based in Mullaitivu, Army chief, Gen. Shavendra Silva announced that the economic development of the area has been entrusted to the Army by President Gotabaya Rajapaksa. This was aired on the TV newscasts. (Watch from minute 19, https://m.youtube.com/watch?v=qgE7mO0y_Ls) Where does that leave Minister Basil Rajapaksa and the Sri Lankan Cabinet Ministers?

Meanwhile the Army chief who seized power in Sudan has had to step down due to unremitting street protests by the Sudanese people. There’s a lesson in there somewhere.

(Excerpts from a longer article published in Daily FT)