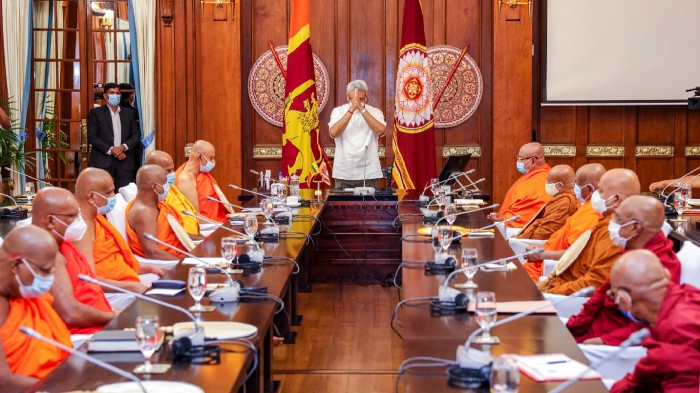 The President delivered his one year in office statement yesterday.

He urged the Sinhalese that their existential fears should not be a matter of concern anymore given that he is in office:

It is no secret that the majority who voted for me then were Sinhalese. They rallied because they had legitimate fears that the Sinhala race, our religion, national resources and the heritage would be threatened with destruction in the face of various local and foreign forces and ideologies that support separatism, extremism and terrorism.

The main appeal made by the people to me was to ‘protect the country’.
During this short period of time we have taken steps to ensure the security of the country as requested by the people. The public should not have apprehensions on this issue any longer.

This is an extraordinary articulation owing to:

a) his admission that he was voted almost exclusively into power by the Sinhalese
b) his admission that he got this vote because of their perceived insecurities (which of course he thinks were genuine).
and then he goes on to quite importantly articulate that they should not have any apprehensions about this any longer as he has taken care of these issues.

Now, this ‘assurance’ is welcome if it means the President is telling his base (Sinhala Buddhists) that there is no need to get agitated anymore about the country being robbed from them.

But the President will have to answer the question of whether he intends to continue with taking these ‘steps’ that he says have been taken.

Is this done or is this is a continuing reassurance that he must continue to keep giving, to keep the majority of the country appeased?

Meaning does he have to keep reassuring to his base that these things have been taking care of.

If yes, and I am afraid it’s a yes, the intense Sinhala Buddhist militarisation of the State, trampling of civil rights and liberties will continue.

It will continue because in case he is not able to deliver on his vistas for splendour or prosperity — or whatever it is called, he will have to fall back on the insecurities of the majority to remain in power.