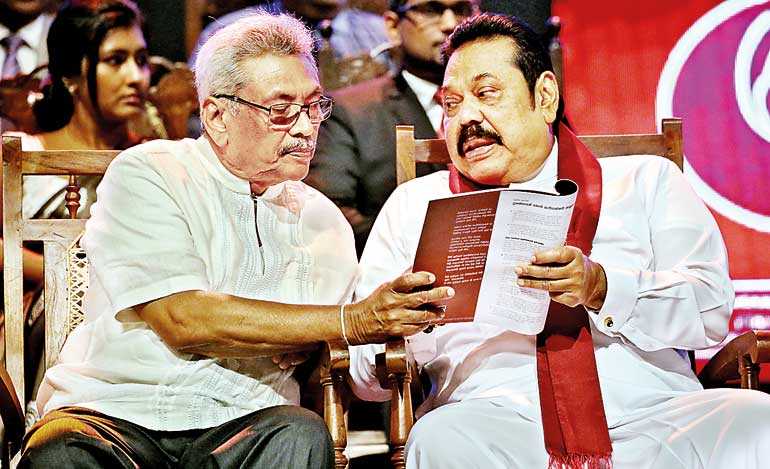 He also pledged to restore national security, establish corruption-free governance, focus on a non-aligned foreign policy, and enact one law to strengthen the democratic values of the country.

Addressing a ceremony held at the Nelum Pokuna Mahinda Rajapaksa Theatre, Rajapaksa said the manifesto was drafted following a series of consultations with professionals and stakeholders to address issues of all sectors of the county.

The manifesto consists of 10 chapters and priority was given to national security, anti-corruption measures, increasing productivity in a personal capacity, people-centric economy, technology-based society, maximising space for a smart and sustainable environment, law-obedient society, and connecting with rural economy.

He pointed out that restoring national security will be his priority as that will raise confidence in citizens and outsiders to engage in economic activities.

“We see national security as one of the most important elements of the county. I will protect security forces, police, and defence personnel under my watch.

We will not allow any foreign entity to influence the country’s interest. I will do my best to restore national security and make Sri Lanka a safest place that anyone will visit,” Rajapaksa said.

He noted the country’s sovereignty and territorial integrity would be protected under his watch. Rajapaksa assured that the law ought to apply to everyone equally regardless of their ethnic or religious background.

He pointed out that the cost of living is an issue that needs to be addressed immediately, insisting that would be one of his priorities if elected.

“People are suffering due to the high cost of living. As a solution, we will introduce a relief package soon. We also expect to introduce people-centric policies and hope that will financially stabilise every citizen in the country.”

“Our vision is to make future generation more productive and ensure citizens do not depend on anyone and make their own future and add value for the country.”

Referring to the area of education, Rajapaksa said the country should move for a knowledge-based economy to par with global movements. “This is the knowledge century. The centre of gravity of the global economy is now shifting towards Asia. If we want to harness maximum benefits, we need knowledgeable youth who have the capability to gain employment opportunities and engage in entrepreneurship.”

He also said that every student who passes the GCE Advanced Level examinations will be offered a chance to enter a university or get an education similar to that level. According to Rajapaksa, the knowledgeable youth will fast-track the country’s development.

“I promise that the three-year nursing training program will be expanded to a four-year degree program that will help them find employment opportunities abroad.

The school teacher training program will also be lifted to degree program standard,” he stressed.

Referring to fiscal policies, Rajapaksa said he would modernise laws and regulations to encourage business start-ups. He noted a simple tax policy would be introduced to attract more investments and encourage the public to pursue more economic activities.

“We will reduce Value Added Tax (VAT) by 8% and also discontinue PAYE tax imposed on State and private sector employees. We are also hoping to introduce modern technology to the Excise Department and Customs to address laps in tax collection. ”

“We hope to develop the tourism sector into a $ 10 billion industry. Sri Lanka’s geographic location will also play a major role,” he added. Rajapaksa pointed out that he will make use of the country’s strategic location to develop aviation, ports, and transport infrastructure to expedite its development.

“There will be no exports without value addition under our government. Value addition will generate more income, which will boost the economy. We will also encourage innovation and provide assistance for innovations.”

He stressed that his expectation was to see Sri Lanka become a business hub in the South Asian region. He promised to create one million jobs in his time at office.

Referring to women empowerment, Rajapaksa pointed out that he will introduce new methods for housewives to gain an income from home. He noted special projects would be introduced to promote female entrepreneurship.

Moving on to the agriculture sector, Rajapaksa said free fertiliser subsidies would be provided and debt incurred by farmers due to natural disasters would also be written off. Referring to the much-debated fertiliser subsidies, he pointed out that farmers will be encouraged to move towards organic fertilisers.

Rajapaksa also pledged to eradicate drugs and corruption to fast track development efforts. However, he did not provide details on how he would eradicate them.

Speaking at the same event, Opposition Leader Mahinda Rajapaksa said Gotabaya Rajapaksa’s manifesto addresses many of the country’s long-standing issues and would guide the nation towards prosperity.

“I believe we do not want our policies to be written on papers, because the people of this country know that we will deliver on our promises. We will not give false hopes to the public.”

Referring to the highly debate topic of how Rajapaksa will form a government if elected, he pointed out that under chapter two of the manifesto, they were seeking permission to hold a Parliamentary Election at the earliest opportunity.
By Nuwan Senarathna/ Daily FT