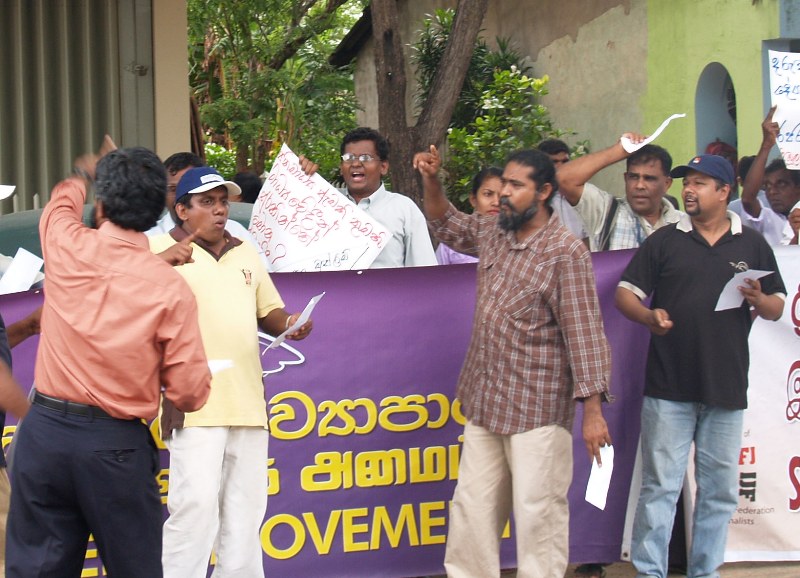 The International Federation of Journalists (IFJ) joins partners and affiliates in Sri Lanka in calling for closer attention to be paid to media freedom issues in the post-war process of reconciliation in the country. Consultations carried out by the IFJ and its affiliates with key actors in the country suggest hopes that the end of Sri Lanka’s civil war in May 2009 would quickly improve conditions for the country’s media practitioners are fading fast.

In June 2012 the Government of Sri Lanka (GoSL) announced a “National Action Plan” (NAP) to give effect to the recommendations of a commission on national reconciliation, appointed at the end of the civil war. Recommendations included steps to prevent attacks on media personnel and institutions, the investigation of such events from the past and deterrent punishment where appropriate. It also urged the restoration of full rights to free movement for media personnel and the enactment of a right to information (RTI) law.

The IFJ and its partners are concerned that the NAP does not set down any time-line for the passage of an RTI law and does not address the climate of impunity for attacks on the media. Indeed, the Lessons Learnt and Reconciliation Commission (LLRC) appointed by Sri Lankan President Mahinda Rajapaksa, had voiced its outrage at the attack on G. Kuhanathan, news editor of the Tamil daily Uthayan, even as its deliberations were taking place.

Kuhanathan has since been granted political asylum in Switzerland, along with Uthayan’s Jaffna based reporter S. Kavitharan, who was also repeatedly attacked by unidentified assailants.

There is a widespread popular belief that the attacks on Uthayan and its staff have been orchestrated by Douglas Devananda, leader of the Eelam Peoples’ Democratic Party (EPDP) a contender for power in the northern province of Sri Lanka, and a close ally of President Rajapaksa. Diplomatic cables from the U.S. State Department published by Wikileaks, reveal that the President’s brother and senior minister, Basil Rajapakse informed the U.S. embassy in Colombo that the EPDP and elements of the Sri Lankan navy may have been behind at least one major attack on the newspaper in 2006.

Uthayan was issued with a defamation suit by Devananda for having published this news report.

Progress in the investigation of newspaper editor Lasantha Wickramatunge’s murder in January 2009 and the disappearance of cartoonist Prageeth Eknaligoda in January 2010 has been negligible.

Meanwhile, efforts by journalists’ professional bodies – including IFJ affiliates, the Free Media Movement (FMM) and the Sri Lanka Journalists Association (SLJA) – to highlight the issue of impunity have been attacked by official spokespersons as akin to high treason.

The IFJ and its partners observed that state-controlled media, the Sri Lanka Broadcasting Corporation, the Sri Lanka Rupavahini Corporation, Channel ITN and the Lake House publications, have become forums for verbal abuse and vilification of independent journalists and human rights defenders, often with dangerous implications for their physical safety and wellbeing.

Journalists and human rights defenders who have joined national and international platforms calling for justice and accountability for human rights abuses committed during the quarter-century long civil war, have been at particular risk. The large group of journalists in exile are continually named by official spokespersons, especially over state-owned media, as “anti-national” elements working against their “motherland”.

News websites hosting content on Sri Lanka have been subject to arbitrary rule changes and frequent obstruction. In December 2011, the Media Ministry in the Government of Sri Lanka (GoSL) introduced a rule requiring the registration of all websites hosting news content on the country. An FMM petition challenging this notification under fundamental rights clauses was dismissed by the Supreme Court in May on grounds that the petitioners had no locus standi in the matter, since the websites themselves had complied with the registration requirement.

On June 29, Colombo city police raided the offices of two news websites, took staff into custody and impounded their equipment. A fortnight later, the Media Ministry issued a directive reaffirming the registration requirement for news websites and announcing an additional requirement to pay an annual fee for renewal.

Following a fundamental rights petition by website owners in September, Sri Lanka’s Supreme Court warned against any misinterpretation of its ruling regarding registration and ordered all the equipment confiscated from the websites’ offices be returned.

The website staff taken into custody were released after one day in detention, on the orders of a city magistrate.

The IFJ and its partners are also concerned at the reactivation of the long dormant Sri Lanka Press Councils Act of 1973. This is an act which incorporates several draconian provisions, including the power to prosecute under criminal law for any perceived violation of the laws in force.

The Sri Lanka Press Complaints Council – the self-regulatory body set up by the newspaper industry, has enjoyed a reaffirmation of commitment by its stakeholders, although faces a withdrawal of donor support threatens its continuing relevance.

Provincial journalists, whose role should be crucial in the post-war context, continue to suffer from unequal wages and working conditions, seriously impacting their motivation and ability to work.

The IFJ and its partners have highlighted the following steps for a free and active media through the months ahead, when reconciliation processes in Sri Lanka will be tested:

As an immediate priority, the IFJ urges the GoSL to order a halt to the stream of hostile rhetoric over state-owned media channels, which has now targeted the nation’s highest judiciary, leading to the possibility of contempt action.