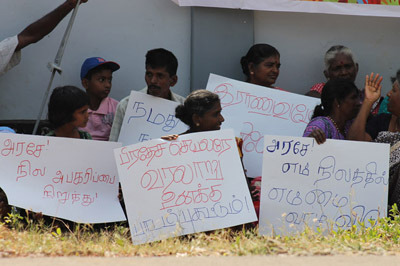 The government has made moves to acquire over 6381 acres of privately owned land in the Jaffna peninsula, which it says is for a public purpose. The public purpose is presumably for the security forces.  The pasting of notices on trees in Valikamam North under section 2 of the Land Acquisition Act coincides with preparations for the Northern Provincial Council elections in September this year.
It appears to be a hurried plan on the part of the government to acquire this large extent of land prior to the establishment of a legitimate and popularly elected civilian administration for the formerly war-stricken Northern Province.

There is concern in the Northern polity that the purpose of this land acquisition is to change the demographic composition with settlers from outside being registered on the Northern electoral lists.  In Kokilai, Mullaitivu and adjoining villages such as Vannankulam, Uradikulam, Thaddamalaikkulam, Pannaiyandaukulam, Akkaraivelli, Vathamadu, Kamankulam, Amayankulam, there are media reports of 3000 such families being settled.

The government move to take over the land of the war-affected people has caused agitation and panic amongst the thousands of affected people in over 24 villages who continue to be displaced and living in camps who now stand to lose their lands forever and given rise to disaffection amongst the majority of people living in the Northern Province.   The National Peace Council notes that shortly after the end of the war in May 2009 the government promised to resettle the hundreds of thousands of displaced persons in their original places of residence. This necessarily implied that private land would be restored to their rightful owners. This was one of the recommendations in the government-appointed Lessons Learnt and Reconciliation Commission.

NPC is very concerned about the retreat of the government from promises it made and the use of strong arm action against the people using the security forces.  The general practice in the country is that when the government wishes to take over large tracts of land for a public purpose it discusses this matter with the affected population and with their political representatives, and gives the necessary time for legal objections to be made through the judiciary.  We also note that the recommendations of the LLRC are completely opposite to the course of action that the government has embarked upon.

The LLRC recommended that the government should de-militarize the administration of the North as soon as possible and release private lands taken over by the security forces to the people. Internally Displaced Persons have been internationally recognized as having a right to return to their original lands ever since 1948 when the Palestinians fled Palestine when the new state of Israel was set up. The United Nations Relief and Works Agency (UNRWA) was set up specifically to deal with the right of Palestinians to return to their land.  More recently, this right of return and restitution of their property was recognized by the UN in the case of Bosnia as well. Resettlement in their former housing was perceived by the displaced as important for reasons of morality, justice, and economic rehabilitation.

In recent years, the return and reintegration of internally displaced persons and refugees have come to be regarded as essential to peace processes in war-torn societies.  An increasing number of human rights documents and peace agreements contain paragraphs on housing and property restitution and the right of displaced persons to return to their homes of origin.  The UN has also recognized the right of the Internally Displaced to go to courts to establish their right to restitution of their property.   The National Peace Council believes that any decision that severely affects the lives of large numbers of people needs to be taken in consultation with the elected Provincial Council after it is constituted. Therefore we urge the government to reconsider its decision to take over the vast extent of privately owned land in the North in the light of what the LLRC has recommended with a view to fostering national reconciliation in a manner that meets with international standards.