Gnanasara, Rathana and Asgiriya Chapter Seeds of a national crisis in the making 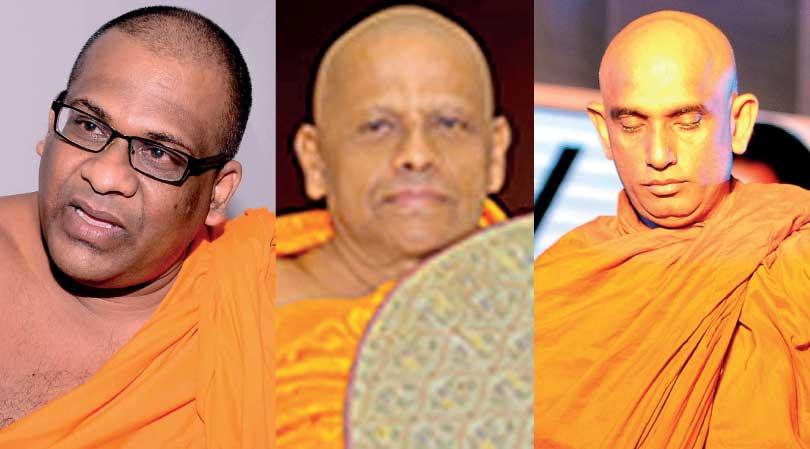 “A Boss in Heaven is the best excuse for a boss on earth, therefore If God did exist, he would have to be abolished.’’
~ Mikhail Bakunin

Being born a Buddhist, educated at one of the leading Buddhist schools in Colombo and for that matter by one of the greatest erudite scholarly monks at the time, I cannot help but feel very hurtful being witness to the total weaponising of our great and sublime philosophy by those uneducated street thugs who roam about all corners of our land pretending as the exclusive custodians of the teachings. It is indeed a great misfortune befalling our nation; its multiple facets have enveloped the collective mindset of the Sinhalese Buddhist segment of our people like a python swallowing an unsuspecting prey. Gnanasara can now boast about fattening of his ranks, on one side by the Asgiriya Chapter of our organised religion and on the other, the other megaphone which has been drifting in search of an audience, Athureliya Rathana.

Fundamentalism, as per Wikipedia, ‘usually has a religious connotation that indicates unwavering attachment to a set of irreducible beliefs. However, fundamentalism has come to be applied to a tendency among certain groups – mainly, though not exclusively, in religion – that is characterised by a markedly strict literalism as it is applied to certain specific scriptures, dogmas or ideologies, and a strong sense of the importance of maintaining ingroup and outgroup distinctions leading to an emphasis on purity and the desire to return to a previous ideal from which advocates believe members have strayed. Rejection of diversity of opinion as applied to these established “fundamentals” and their accepted interpretation within the group often results from this tendency.’

Buddhist Fundamentalism can be taken in two contexts. Firstly, in a literal sense, those who believe in the religion and its fundamental teachings of Metta (loving kindness), Karuna (compassion), Muditha (sympathetic joy) and Upekkha (equanimity), the four sublime states of mind, and the rest of the original teachings of the Great Tathāgata can be called Buddhist Fundamentalism. In the other context, fundamentalism is as practised by those extreme elements in the Christianity and Islam religion, and those who practise Buddhism, not believe, but only practice, in order to drive home their misplaced grievances in the name of Buddhism and resort to all extremities of violence, mayhem and vandalism. For our reference, I have chosen the second kind of believers and practitioners of ‘Buddhist

Fundamentalism.’Gnanasara, Rathana and the Asgiriya Chapter belong in that ignoble segment of fundamentalists. That is the group, if not checkmated now, that might become integral parts of a national crisis waiting to happen in the event of another suicide bomb blast as enacted on Easter Sunday.

The psyche of the average Sri Lankan Buddhists is much to be desired, especially when it comes to patience and endurance of attacks on innocent civil life in the country. Legal luminaries may argue the arms of law and order should reach out and the rule of law must prevail in such an unbecoming state of civil strife. Such nuanced arguments and sophisticated defence of equality before the law and neutrality of dispensation of justice might not go down well with a crowd that has been angered and driven to frenzied extremities by political cohort-thugs in saffron robes. When religion, specifically a religion such as Buddhism whose fundamental foundation is Ahimsā (non-violence), is being portrayed as one in need of protection from other religions and at the same time proffered as a pretext for violent and unadulterated vandalism, it becomes quite hard to prevent an uprising of sorts from members of a segment of population which accounts for more than 70% of the total. If such an uprising were to occur in Sri Lanka, Rohingya in Myanmar would look like an afternoon picnic.

In Myanmar, the Muslims who were attacked by a so-called Buddhist majority, they, the Muslims had a land border to cross, to Bangladesh. Sri Lanka does not have land borders with other countries. She is surrounded by the Indian Ocean and the Muslim population in Sri Lanka is not as docile as the ones in Myanmar. The resulting clashes will be more akin to ethnic warfare than to minor clashes that would lead to rudimentary clashes between two ethnic groups ending up in refugee camps in Tamil Nadu. Furthermore, the Muslim ethnic groups in Sri Lanka are known to be closely associated with the leading Muslim nations in the world, especially the Sunnis led by Saudi Arabia. The geopolitical ramifications would be uncontrollable in the event such clashes between Muslims and Sinhalese Buddhists should occur.

Gnanasaras and Rathanas will come and go in hundreds; organised religions whether Buddhism, Christianity, Islam or Hinduism will thrive in the absence of rational philosophising of human values and measures. But the nation of Sri Lankans has to move forward.

What options are available for the government of Sri Lanka? What would be India’s reaction? What would the advice of America be? Is Sri Lanka ready and equipped to sustain another ethnic war, this time with Muslims, that will claim hundreds of thousands of civil lives, both from amongst Sinhalese and Muslims? These are the issues that should be argued within the walls of the National Security Council located in the Presidential Secretariat.

There is a fundamental flaw in seeking political advice from religious leaders. Sri Lanka is a secular country whose secular Constitution is the very source of law. Nowhere is it mentioned in our Constitution that one segment of our population is more equal than the other. Provision of special status to Buddhism does not qualify as to treat our country as a Buddhist country or not. Our country is not a Buddhist country or a Hindu, Christian or a Muslim country. The people in the country could be called Buddhists, Christians, Muslims or Hindus, but not the country as a whole or its government.

Elections and pursuit of power, especially from the majority of Sinhalese Buddhists, has driven our politicians to pay Pooja to the Malwatta and Asgiriya Chapters of ‘Sri Lankan Buddhism.’ This exaggerated allegiance to Buddhism is being falsely portrayed as devotion on the part of our politicians to the uplifting principles of Buddhism.

It is in this broad context that one has to look at the current status of our country. The Easter Sunday massacre has caused many a thinking Sri Lankan to rethink about his or her basic human principles and values. When it is of utmost significance and balanced disposition to respond to these attacks, especially Sinhalese Buddhists, the postures of Gnanasara and Rathana are being buttressed by a so-called leading chapter of the organised part of Buddhism, the consequences could be out of this universe. It is no exaggeration to say organised religion, be it Buddhism, Christianity, Islam or Hinduism, is the very enemy of the inspiring principles of religion. When people begin to show more allegiance to shadowy men clad in religious cloaks than to the principles they pretend to preach, the foundations of societal development start to shake. The very reverberations these shakings produce would be sufficient to lead to an anarchical state in any society such as is evidenced in Somalia and Yemen.

I sincerely hope that neither our incumbent President Maithripala Sirisena nor Prime Minster Ranil Wickremesinghe would wish to leave behind a legacy of anarchy. Such a legacy would eventually set a precedent in our post-Independent Sri Lanka depicting our people as an anarchical, lawless bunch of tribes whose paganistic beliefs are held in much higher esteem than basic human values and principles. Gnanasaras and Rathanas will come and go in hundreds; organised religions whether Buddhism, Christianity, Islam or Hinduism will thrive in the absence of rational philosophising of human values and measures. But the nation of Sri Lankans has to move forward. Her position among other communities in the broader family of nations will be judged only in terms of extraordinary feats and unsurpassed human conditions that Sri Lanka as one nation would impose on herself. Such great feats may look like unachievable heights for the moment, but history of a nation should not begin or end with meaningless notions of self-aggrandizement.