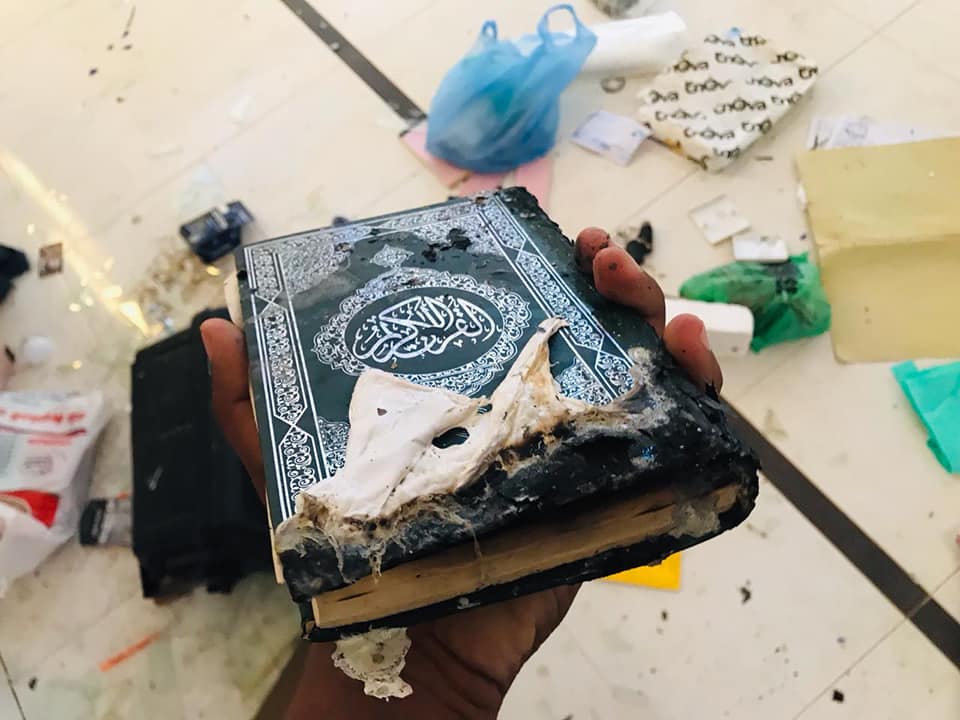 Image. Half burned Quran found at a Mosque that was set on fire by extremist Sinhalese mobs .

(14 June 2019, London.) The Global Tamil Forum (GTF) express its strong condemnation of the anti-Muslim hatred and hysteria being whipped up by sections of Sinhala Buddhist community, and call on the Sri Lankan authorities to take immediate steps to arrest this dangerous development.

Following the end of the decades-long civil war in 2009, the Muslim community became the prime target of the extremist elements among the Sinhala Buddhist community, and this was aided and abetted by powerful forces within the majority community. The emerging trend was unmissable – well-planned violence in the Kalutara district in June 2014, highly-coordinated riots in the Ampara and Kandy districts during February-March 2018, and the death and destruction in several towns across the North-West region in May 2019.

Muslim civilians lost lives; their homes, businesses and mosques were ransacked and burnt; and tens of thousands were displaced. Many of these attacks were carried out under the patronage of Buddhist monks and in the presence of security forces. The hatred against Muslims was systematically ramped up over recent years and the community has been harassed and intimidated in a multitude of ways – deceit and false propaganda, calls to boycott Muslim professionals and their businesses, and imposing dress codes in violation of basic human rights. Actions of the extremist Sinhala Buddhist elements thus resulted in the creation of a fertile ground for extremist Islamic elements to exploit. This is undoubtedly one factor that contributed to the Easter Sunday violence.

A notable crescendo was the recent hunger strike by the Monk-Parliamentarian, Athuraliye Rathana, calling for the resignation of Muslim Ministers and Governors by implicating them to Easter Sunday violence. GTF supports a thorough investigation into Easter Sunday attacks to identify all those directly or indirectly contributed to that carnage and bring them to face the full force of the law. Unfortunately, pre-empting such a process with vague allegations and a hunger strike helped build mass momentum around these demands and created a tinderbox with potential for serious violence against the Muslim community.

Sri Lankan law enforcement officials and politicians have failed to show leadership in arresting this dangerous trend. Hundreds of Muslims continue to be detained in suspicion of involvement in the Easter Sunday violence, whereas key persons behind the recent anti-Muslim violence were released without regards for due process. Galagoda Gnanasara, an extremist monk known for inciting violence against Muslims, was pardoned within a year of serving his six-year jail sentence by President Sirisena, who did not have the moral fortitude to express public sympathy or support for the beleaguered Muslim community and its leaders.

Amidst these tense inter-communal relations, a stand-out is the collective decision made by all nine Muslim Ministers and two Muslim Provincial Governors to resign from their positions. As articulated by Minister Rauff Hakeem, their actions were aimed at easing the fear of the Muslim population that was ‘terrified’ and ‘feared bloodbath’; he also called on the government to expedite investigations into all accusations related to the recent violent incidents.

For the Tamil people it is a sense of déjà vu from the fifties to the eighties – when discrimination and high-handed actions against Tamil civilians; mob violence with collusion of security forces and elements of the government; total impunity for perpetrators; and harassment and intimidation of their Parliamentarians, all the while Sinhala national leaders appeased Sinhala extremism. Such appalling failure alienated the Tamil community, which ultimately led to civil war, the impact of which will take many more years to overcome. It will be tragic if the Muslim community is subjected to the same fate and made to feel as second-class citizens in their own country.

The hard-line Buddhist forces have historically played an abominable role in preventing ethnic harmony, equality, and political power sharing among various communities. The latest events took this a step further which resulted in the resignation of Ministers and gave the agitators a pseudo-veto in deciding who could be in the government. This set a dangerous new precedent.

Our strong conviction is that the numerically minority communities and their political leaders need to work together and in partnership with progressive forces from the majority community to regain their safety, rights and pride of place in the country. The political and religious leaders representing the majority community need to act beyond pandering to extremist elements, with a vision to create equality among all communities. The international community too should play its part in ensuring that Sri Lanka does not slide into another dark age of ethnic and religious intolerance and violence. This is essential for peace in Sri Lanka.