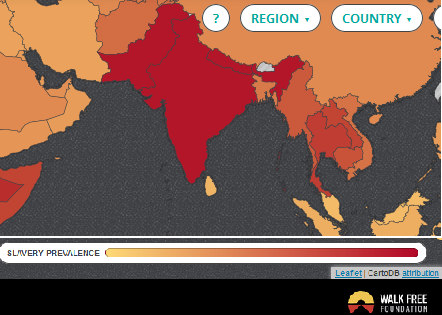 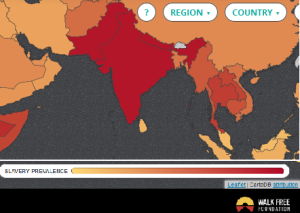 Modern slavery: a matter of poverty, the rule of law and the indifference of the national government
Liliana Corrieri

Pakistan ranks third in the Global Slavery Index. It is estimated that there are 2,000,000 – 2,200,000 people involved in various forms of modern slavery in Pakistan. Pakistan counts a population of 179, 000,000 people and with the increasing birth rate the number of enslaved people will consequently escalate.

The Walk Free Foundation, an organisation based in Australia and which addresses the problem of modern slavery, has this month released the first edition of the Global Slavery Index. The Index assesses 162 countries (which together count approximately 7 billion people) and ranks them on the basis of the estimated pervasiveness of slavery (including bonded labor, child slavery, forced and unpaid labor, debt bondage, descent-based slavery), the occurrence of child, forced and servile marriage and the volume of human trafficking, both in and out of each country.

The findings of this Index, the very first of its kind, are alarming and dispel the myth that slavery is a form of inhuman treatment and abuse, as well as a condition of exploitation, related to the past and historically concluded in 19th century.

“A key-finding of this Index is that there are an estimated 29.8 Million people in modern slavery globally”.

Three of the five countries in which the prevalence of modern slavery turns out to be highest in the world are south Asian countries, these being Pakistan (which ranks 3rd in the index), India (4th) and Nepal (5th). However, the index also offers an alternative analysis of the phenomenon by providing an estimation of the ‘absolute number’ of people involved in slavery in each country. When considering the number of people enslaved the ranking changes and sees India and China as the two countries with the largest number of enslaved people. It is interesting to point out that in both rankings Pakistan is steady in third position, which means that the issue of slavery in the country is extremely serious both in terms of numbers and in terms of instigating factors and concentration of the problem.

Primary industries (brick kilns especially), manufacturing, commercial sexual exploitation, forced begging and domestic servitude are reported as the areas in which slavery in Pakistan concentrates the most. Bounded labour is defined as the greatest problem in the country, particularly in the Sindh and Punjab provinces. The combination of poverty and illiteracy affects a great deal of children (who are also sexually abused in an extensive manner), together with vulnerable Afghan refugees and other ‘low-cast’ labourers. Culturally related practices expose religious minorities and women to higher risks of being coerced into enforced labour and other forms of exploitation, including fraudulent recruiting practices for low skilled employment abroad.

Modern forms of slavery are a social, economic and cultural plague upon millions of people who are denied their freedom and dignity. They are born bound by hereditary debts, affected by poverty and unemployment and defrauded by false recruitment or forced abduction which leads to trafficking. The justifications (including ‘customary laws’, gender and cast-based discrimination), as well as the variety of deceptive means by which people become enslaved are numerous. However they all share the same illegal purpose of increasing unethical and criminal profits. Modern slavery, in fact, needs to be understood as a crime, which flourishes not only in circumstances such as institutionalised poverty, culturally tolerated discrimination, economic stagnation and environmental degradation, but it is also due to the extreme abuse of power, corruption, the poor rule of law, the absence of regulations and a weak monitoring of the labour market. The reality of modern slavery, therefore, entails serious legal implications and it is strictly connected to the national level of democracy and the implementation of law.

Policies and conditions within a country are essential components and provide the basic framework from which to tackle the problem of modern slavery and move towards adequate responses and action. With regards to the top three worst performing countries – Mauritania, Haiti, and Pakistan, all with low GDP per capita and limited overall development – the Index observes non-existent government responses aimed at the eradication of slavery.

“Criminal justice responses are clearly at the heart of any response to modern slavery. However, other key considerations include government coordination, budget allocation and accountability, victim support services, and responses to clearly identify vulnerable sectors (whether migrant workers or workers in the informal economy)”

The Index points out that despite the ratification of several international treaties relevant to the issue of slavery, such as the Abolition of Forced Labour Convention (1957) and the Worst Forms of Child Labour Convention (1999), Pakistan is still lacking in coordinated and adequate policies on the matter. Although slavery is prohibited by the constitution, only some forms of modern slavery are criminalised and yet those few regulations are poorly implemented. The bad coordination between the central government and provincial institutions contributes to worsen the quality of the monitoring and the frequency of labour inspectorates. An effective partnership between state agencies and NGOs is also lacking. Furthermore, data collection at a grassroots level and national surveys are inexistent.

The existing startling situation and the increasing number of people exposed to the risk of slavery have to be attributed mainly to the expansion of the informal sector within the country, together with the privatization processes. The formal sector has been shrinking and the government has lost all its control over the labour market. The informal sector prefers to hire women and children as they represent a copious source of cheap labour and their employment allows avoiding labour laws. They are forced to work between 12 to 16 hours per day and are paid meagre amounts which are hardly enough for survival. The Government of Pakistan has failed in the supervision of the informal sector and hence is directly responsible for the perpetuation of slavery. Due to absence of the rule of law, slavery has been become the best way for commercial and industrial activities to prosper unethically.

The Global Slavery Index tries to offer a new tool to governments, trade unions, civil society groups and single citizens to understand the magnitude of the problem of modern slavery in their countries. Governments, in particular, have a decisive role to play, by enacting and enforcing relevant laws for the sake of human dignity and the protection of the most vulnerable sections of their society. The Government of Pakistan is challenged by the compelling necessity of undertaking essential measures in order to monitor and reduce the level of all kinds of slavery, as well as punishing those responsible for its prevalence.