State Minister for Prisons went to Anuradhapura Prison, summoned the Tamil political prisoners and threatened to kill them on the spot – Gajen Ponnambalam MP 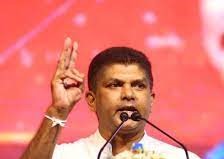 The TNPF can confirm that on the evening of the 12th of September the State Minister for Prisons has gone to the Anuradhapura prisons, summoned the Tamil political prisoners and had got two of them to kneel in front of him.

The State Minister had them pointed his personal firearm at them and had threatened to kill them on the spot.

The TNPF condemns in the strongest possible terms this dastardly behaviour of the State Minister. Tamil political prisoners are already traumatised for being held in detention under one of the most draconian pieces of legislation known to the world, the PTA.

Even worse they have been remanded for several years, some even more than a decade with no evidence against them and no indictments being served.

To have the Minister who is supposed to look after their affairs threaten to kill them can’t possibly make their trauma any worse! The TNPF calls for the immediate resignation of the minister and for him to be stripped of all portfolios.

The TNPF wishes to point out to the Co-group of countries on Sri Lanka at the UNHRC to understand the futility of the UNHRC and containing Sri Lanka within a institution that will never deliver on a reluctant state that has mastered the art of avoiding accountability.

It is the duty of the State, as per the #MandelaRules, to protect the rights of prisoners. In our work on prison reform and drug rehabilitation @UNSriLanka works to strengthen capacities to uphold the rights of all those in custody & condemns any ill treatment of #prisoners.