“Get rid of the 13th Amendment” – Elle Gunawansa Thera, a member of the Police Commission 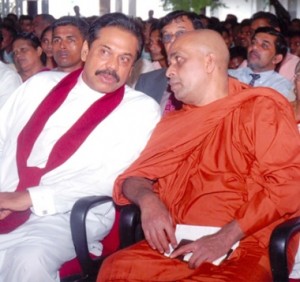 President of the Deshaya Surakeeme Jathika Viyaparaya (DSJV) Ven. Elle Gunawansa Thera urges the government to abolish the 13th Amendment as it has created so many problems in Sri Lanka.

He says that he had vehemently opposed  the introduction of the controversial 13th Amendment to the Constitution when it was done by the rulers and to date he has not changed his view or stance.

In an interview with LAKBIMAnEWS the thera, known for his vociferous take on national issues said that he and several Buddhist monks had staged a satyagraha in front of the Bo tree in Pettah alongwith the former Prime Minister Sirimavo Bandaranaika.

“That day the police shot at us and a large number of monks and laymen were killed due to the firing,” he said.

“The current president too was part of that satyagraha,” he added.

“But all of them represented the SLFP while the monks represented civil society. They shot us under the instructions of the then President J.R. Jayewardene,” he continued.

Strong opposition for the Amendment

Ven. Elle Gunawansa Thera noted that following the crisis situation that had arisen in the country as a result of strong opposition to the Amendment from civil society President Jayewardene, on a mission to get the Amendment approved, had even gone to the extent of providing accommodation to MPs in five-star hotels.

“Not only did he provide accommodation for them in such hotels, they were also brought, one by one to Parliament to obtain their vote in favour of the controversial Amendment which was forcibly introduced to our Constitution,” said Gunawansa Thera.

“That was not a justified way of seeking votes from Parliament. It was also not a democratic vote. As I said earlier it was forced down our throat,” he added.

According to Ven. Elle Gunawansa Thera one of the main reasons for the need to get rid of the 13th Amendment to the Constitution is due to the constant clashes it creates between the three institutions – the executive, the legislature and the judiciary.

“If the introduction of the Amendment is going to threaten the independence of the only means that people of the country have to seek justice, and creates overlap of powers among the three institutions, then there is no other reason than that to do away with this Amendment,” he said. He also added that the route by which the Amendment was passed in Parliament left room for international forces with adverse view on Sri Lanka to influence the voting process.

“There is pressure applied by India, and the US also demands that we provide land and police powers through the 13th Amendment,” he said while adding that such a situation has become a threat to Sri Lanka’s sovereignty, territorial integrity and as well as the unitary status.

When asked whether the government would be able to do away with the controversial Amendment, the thera emphasized that if the president and the government are truly concerned about the future of this nation and its people, then they should be able to take a decision to get rid of the Amendment rather than making decisions based on personal political gains.

“It may be a tough decision to take but those decisions have to be taken by them if they are genuinely concerned about the country and its people” he averred.

He continued, “If the government were to get rid of this ridiculous Amendment, it would be successful in providing a far greater freedom to the people and the country than what was achieved at the end of the 30-year war with the LTTE.”

Millions of rupees wasted on PCs

“Look at how many millions of rupees are wasted at the Provincial Council (PC) level. But what is the benefit gained by the country through the PC system? The only thing that has happened is that a few chosen people have benefited from the system,” he continued.

“Put in a nutshell, the PC system introduced to us through the 13th Amendment to the Constitution, has become more or less a white elephant. This system has also added to the woes of the Sinhalese, Tamil, Muslim, Burgher and Malay communities,” he continued.

Ven. Elle Gunawansa Thera explained that though India forced the 13th Amendment to the Constitution down our throat under the guise of addressing grievances of minority communities, particularly those of Tamils, Sri Lanka in the long term had to end that struggle by waging a 30-year war with the LTTE.

“The PC system was introduced with the intention of solving the issues in the North,” he continued. “And it must be remembered at all times that the 13th Amendment was not something that we sought or demanded from any country. It was a trap that we were forced into.”

The thera alleged that the TNA is deceiving the masses on the issue concerning the PCs. He charged that an issue faced by the Tamil politicians was being portrayed to the rest of the country as one which is terribly affecting the Tamil people of the North.

“This is nothing but a mechanism employed by the Tamil politicians for their own political survival at the expense of the Tamil people. We would also like to know what special issues are faced by the Tamils here on account of them being born as Tamils,” the thera asked.

He further charged that India was responsible for nurturing the LTTE and its growth in this country, and said that if they were truly concerned with the plight of certain communities in Sri Lanka, then they would not have allowed the LTTE to develop to the scale it did.

“This was nothing but a cancer introduced to us by India,” the thera charged.

He went on to say that pressure being exerted on the Indian Central Government by the Tamil Nadu political lobby is not Sri Lanka’s concern. He added that our rulers should be more concerned with the problems faced by the people here rather than be swayed by issues in other countries.
He said every time India gives an order does not mean that Sri Lanka should accede to the same. Politicians here must have the courage to stand up for their own rights and for the people living here.

“This is a concern which impacts our country. And it is time for all communities here to be united for the sake of the country. Our soldiers brought the present day freedom we enjoy, freedom that even the MPs of TNA have to roam freely in Colombo unlike in the past when they were scared for their lives. It was the blood of our soldiers that was shed for this to be achieved,” he stressed.
He noted that what is needed is the  creation of a cultural bridge between the Sinhalese and the Tamils which would be an assured way of resolving the so-called ethnic issue.