“Get out you dogs! If you don’t come out we’ll kill you!” – Sri Lanka Police threaten peacfull protestors 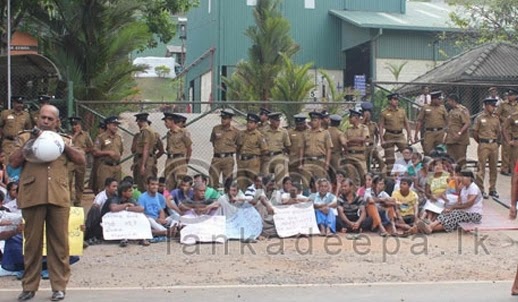 The villagers who carried out an agitation demanding solutions for the issues created due to the pollution of the drinking water by a rubber factory at Thunnane in Hanwella were assaulted by the police and 48 including women, children and devotees who were observing percepts at a nearby temple were arrested. Senior police officers scolded the arrested in obscene language displaying their hatred towards the masses say sources.
A senior police officer threatened villagers saying “Get out you dogs! If you don’t come out we’ll kill you!” Yesterday a senior police officer had told villagers to give up the protest ‘fast’ if they loved their lives.

Police personnel from 25 police stations from around the area were deployed to tear gas and baton charge villagers who engaged in a peaceful agitation. The villagers enraged at police atrocity cut down trees across the road and burnt tyres to obstruct the road. Several villagers were arrested.

Villagers went to a temple nearby for their protection and the police broke into the temple to chase away the agitators. The police also assaulted Bhikkus and devotees observing ‘sil’ in the temple.

Villagers are still waiting at the scene in small groups while police, STF and Army have been deployed.

The chief inspector of Police at Borella Police Prasad Siriwardene, who was part of the police contingent sent to suppress the agitation was seriously injured when a rubber tree fell on him say police.

At the moment a discussion is being held between the police and a team of villagers say reports.

A tense situation prevails in Thunnana area at Hanwella due to tear gas attack and shooting by riot police and the Army deployed in the area. The agitators have blocked the road and are engaged in a protest campaign say reports. Meanwhile, police have arrested several agitators.

The residents commenced a protect ‘fast’ yesterday (15th) claiming the environment is being polluted by a rubber factory in the area causing a water issue. The police carried out a tear gas attack on the agitators yesterday to break up the protest campaign.

The situation became tense as the police carried out tear gas attacks and shooting today morning in an attempt to disperse agitators who continued the protest ‘fast’.

The environmental issue has existed for a long period and despite residents taking various measures to get the attention of authorities for the issue, they have not got any solution
LT