FUTA and the survival of democratic dissent; The suffocating grasp of an emergent dictatorship 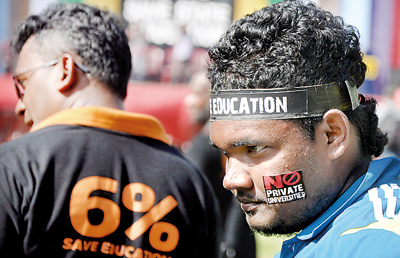 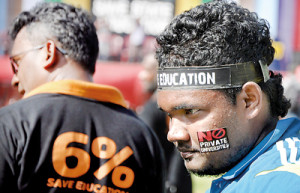 Kumar David
“Where they burn books, they will afterwards burn people” – Heinrich Heine (German Poet 1821)
The madness fanned by Goebbels and fired by Nazi student organisations, reached a frenzied climax on the night of 10 May 1933 when the nation’s great libraries were stripped of radical, socialist, pacifist, culturally alien and Jewish books, and piled on bonfires, lit as Germany careened to censorship, culture control and eventually the most naked of all Twentieth Century dictatorships. No nation that permits the state to crush its knowledge workers can long survive. The FUTA strike is no longer about academic salaries, long ago it morphed beyond that, it is no longer about securing a fair deal in education for the nation’s children, that Rubicon has also been crossed.
What are at issue in Sri Lanka are the last two surviving outposts of democracy. Can the independence of the judiciary and the academic right to dissent survive, or will they perish? It’s no longer about whether you agree with the 6% or not, it’s about shackles of a more menacing nature. Dear god, not even Hitler made Martin Borman, leader of the brown-shirted fascist SA street thugs, the minister of higher education!

If the FUTA strike is crushed it will resemble the crushing blow that JR inflicted on the working class and independent political activity in July 1980. I do not want to over dramatise, it is only in retrospect that we can make secure historical judgements, but it is possible that this is one of the final chances the nation will get to throw back the executive power of an authoritarian menace. The state is primed for the offensive, but public opinion, the working class and trade unions, and the educated classes and left opinion are half asleep, but fortunately, also half awake.

The FUTA strike is no longer about FUTA, it’s about you and I and what we do to bring to a halt the caravan of state as it rumbles on to total control of public life. Total is totalitarian; totalitarianism is the natural culmination of the authoritarian state. Just as nature abhors a vacuum, so authoritarianism abhors all things it cannot subdue. It moved heaven and earth, and cash and threats, to abort a Muslim-Tamil power centre rising outside and beyond its control in the Eastern Province – and Muslim leaders, as habituated for decades, betrayed their community for the umpteenth time. It will not permit an elected provincial council in the North unless international pressure compels it to; it will muzzle the judiciary and harness the police.

The forcing out of Frederica Jansz from Editorship with the instruction that “The first family was not to be criticised in the pages of the Sunday Leader”, and the role of Executive Power in arranging for the purchase of the newspaper, is further evidence, if needed, that dictators abhor dissent and the Rajapaksa Regime will pound alternative foci of power or influence. That is the nature of dictators because just as the nature of democracy is to muddle through diversity and wallow in dissent, the necessary condition for the survival of autocracy is the opposite. A house of cards tumbles if one is moved.

The 6% demand is justified
If the call for 6% GDP allocation for education had remained a FUTA slogan bereft of public support it would have fallen away; instead it has been taken up by society, so let us stop referring to it as a FUTA slogan and call it a public demand, a demand by many sections of society. I have heard it described as a bargaining position which we the public are advancing for tactical purposes and will compromise in the bargaining process. Without attempting to tie anybody’s hand in negotiations that are inevitable in the next period, I do insist that 6% is not a bargaining chip; it is a sound and serious proposal. In any case, while I thank FUTA for introducing and popularising the matter, it now belongs to us the public, as it must be, if it is to have legitimacy. How we prosecute the matter after the FUTA strike is over is also a matter in the public domain.

At an excellent presentation supported by a mass of empirical material Professor Dileepa Witharana, on behalf of FUTA, at gathering at the Town Hall on September 19, claimed that about 60 countries allocate 5% or more of GDP for education. These countries do not belong to any particular category by stage of development or region; they include high, middle, low and very low income countries, they are to be found in several continents. There is recognition across the board that human development is the key to all development. There is an understanding that human development incorporates both nurturing more aware, imaginative and cultured humans, as well as human resources development in the narrower sense of imbuing young people with skills that contribute to national development. The pity is that in Lanka the state, and to a degree sections of society, have lost sight of both objectives.

Problems stick out on every side. Village schools are starved of resources; students learn little, run around and sometimes run amok. No rural schools can prepare candidates for admission to university engineering and medical faculties, and only 10% nationally, all in urban areas, are able to do so. School teachers have lost respect in their communities and schools are shells where students sit out a part of the day in preparation for ubiquitous tuition classes where the real learning is done. The less said about English, Science and IT teaching in rural schools the better since there is nothing to say; it’s a Torricellian vacuum. English language competence even among young people coming out of the so called elite Colombo schools is putrid since none can escape the pervasive social ethos whose tone is set by blithering idiots ranting about Greek-Judeo-Christian culture allegedly polluting science and breeding the evils of internationalism and plurality.

Three graphs are reproduced here from the FUTA presentation to drive home several points. Figure 1 shows the amount spent by the government on education as a percentage of GDP from 1980 to 2010. Even during UNP times (these are UGC statistics) it was well above 2.8%, but a steep decline set in with Chandrika and plummeted after Mahinda Rajapaksa assumed the presidency. Far from being people friendly this regime is hostile to public welfare. Figure 2 shows that universities have been hard hit during the Rajapaksa period; this government has starved the universities and driven them to the wall. Now it is ready to privatise university education. No wonder students and teachers cannot stand it any longer.

The third illustration compares Lanka with 16 countries, including Bangladesh, Nepal, Pakistan and India all of whose per capita GDP is less than ours. Lanka comes out abysmal rock bottom. Yes we are the wonder of Asia! Believe it or Not!

Reform will not stop at education

Substantial enhancements to the education budget and reform of education practices to deliver a more meaningful outcome cannot and will not stop at education. The overflow will reach public health, public works, transport, energy and the media sectors, and then the issue will not be about 20% of the government budget, but all 100% of it. According to the budget allocations for 2012, the top five ministries in order of funding are Finance and Planning (47%), Defence & Urban Planning (10.5%), Ports & Highways (6.6%), Public Administration (6.3%) and Local Government & Provincial Councils (5.9%).

About 40% of the 47% swallowed by the Finance Ministry is for debt servicing. Conditions are worsening as the government is getting deeper into debt by the day; it is into the business of acquiring more debt to service unsustainable existing debt. This is aggravated as the regime runs amok with vast and wasteful white-elephant show case grandiosities. In the circumstances not only is the government unwilling to improve provision of public goods like health, education, transport and energy, it is also readying to crush dissent since that is the only way it can forestall capitulating on its right-wing economic policy framework. The government is in a dilemma, the regime cannot back out in the face of public demands for substantially enhanced education funding without shattering its economic programme. This very knowledge places FUTA too on the horns of a dilemma.

UPFA mouthpiece and MP, Rajiva Wijesinha, lauds the militarization of education in Pakistan and commends the same practice to us (Island, 25 September). The slip is showing! The second biggest item in the budget lays bare the nature of the regime; three years after the end of the war, militarization suffocates the Tamils and intimidates all dissent, the university sector, thanks to the boldness of intellectuals and the volatility of students, is a pesky irritant inviting suffocation by the regime. Thanks to the momentum it is gaining and the public and trade union support it is winning FUTA has the potential to trigger a mass movement. It is difficult to predict how things will turn out in the next two or three weeks but the public’s responsibility is unambiguous. If we want our democratic rights it is we who have to stand up for it; it is not a subcontract we can pass on to FUTA.