Full implementation of 13A: What does it mean? – Varatharaja Perumal 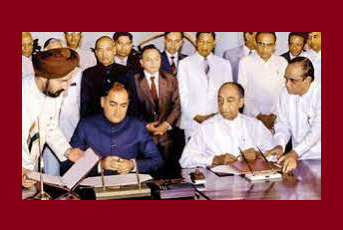 Since the advent of the 13th Amendment (13A) to the constitution of Sri Lanka, 13A has been facing denunciations from different quarters in Sri Lanka.

It is undeniable that the purpose of the establishment of the Provincial Councils (PCs) has not yet been achieved. Instead, successive Sri Lankan governments have been consistently degrading it, while socio-political forces among the Lankan Tamil community have been disregarding and disapproving of the Provincial Councils based on the 13A. It is not at all worthy of their aspirations and sacrifices, they feel.

After the end of the war against the LTTE, the Tamil political parties, which together have a large vote bank, have been virulently expressing the  notion that no political solution would be acceptable to the Tamils other than one which embodies Federalism with the Right to Self-Determination and the unification of the Northern and Eastern Provinces, the Tamil “Home Land”.

But Ignoring ground realities, the leaders of so-called “Tamil Nationalists” parties and influential social leaders among the Lankan Tamils have been assiduously injecting their claims and ambitions into the hearts and minds of the Tamil masses.

Suddenly, since December 2021, the “Tamil nationalist” parties led by R. Sampanthan and C.V. Wigneswaran, for understandable reasons, have been voicing the demand that the Government of India (GoI) should protect the Provincial Councils and ensure the full implementation of the 13A, as it is the duty and responsibility of the GoI since it was a signatory to the Indo-Lanka Peace Accord of 1987. Accordingly, they wrote a letter addressed to the Prime Minister of India. But so far no official representative of the GoI has responded in any manner to that letter.

India’s stand on 13A is well known. It has often been expressed diplomatically. It is clear that the GoI will not repeat the modus operandi applied in dealing with the Sri Lankan State in the years between 1983 and 1990. It is also very unlikely that the GoI will engage directly in negotiations, mediation, or facilitation on the Tamil issue. Thirty five years have passed since the Indian army that was invited by the then President of Sri Lanka and welcomed by the Tamil people, left Sri Lanka with bitter experiences.

However, it is obvious that the GoI will appropriately deal with, handle and engage the State of Sri Lanka in respect of its national strategic and economic interests. The GoI may probably apply different kinds of soft methods discreetly to persuade the GoSL in the matter of devolution to the PCs in line with the Indo-Lanka  Accord.  It also depends on how much the Tamil leaders are going to strive actively and consistently to achieve proper and full implementation of the 13A.

The President of Sri Lanka whatever the reasons may be, has begun to show interest in finding a political solution to the issues raised by the Tamil leaders and has already held an all party conference with both major parties, including the Sri Lanka Podujana Peramuna  led by Mahinda Rajapaksa and Samagi Jana Balawegaya led by Sajith Premadasa, represented in Parliament. It is important to note that all the leaders of major political parties of all the communities have expressed a positive opinion about implementing the 13A fully and moving forward even beyond the 13A within the framework of the unitary constitutional structure of Sri Lanka.

It is widely expected that the Tamil leaders, keeping their doubts about the motives of the Sinhala leaders aside, will take this opportunity to articulate their experiences and demands to achieve concrete progress towards greater devolution to the PCs and ensure social equity, political equality and economic progress.

It is important to understand that the unitary nature of the state cannot be changed, directly or indirectly, without the approval of the people of Sri Lanka at a referendum. Defeat in such a referendum will only encourage and strengthen the Sinhala-Buddhist and narrow-minded Tamil communal forces and further isolate the progressive democratic and left forces among the Sinhala people.

But if proper and full implementation of the 13A is somehow achieved within the framework of the present unitary system, then the political process will move towards the next stage of constitutional development providing greater devolution to the PCs.

Therefore, the priority of the Lankan Tamil society should be to mobilize the support of all nationalities in Sri Lanka and the major international forces to make the Parliament of Sri Lanka remove the defects and deficiencies and make necessary corrections in the 13A and also in the Provincial Councils Act (PCA), No. 42 of 1987, so that the PCS gain reasonable autonomy and function effectively and efficiently in restoring democracy, rule of law, socio-economic progress and peaceful coexistence of all communities.

It is also important that the provisions of the PCA, No.42 of 1987, are understood in full together with interpretations, in conformity with the corresponding provisions in the Sri Lankan constitution and accordingly amendments are made.

Further, the legitimate representatives of the Tamils should put forward their issues and proposals to the GoSl and GoI, in respect of 13A, not rhetorically, but with an explanatory report encompassing each and every aspect of legislative, executive, administrative and institutional devolution to the PCs.

It is to be clearly understood by the Lankan Tamil leaders that the repeated call of the GoI, asking the GoSL to ensure the security, equality, justice, and dignity of the Tamils in Sri Lanka and to implement the 13A fully in order to provide a meaningful effect to the devolution of powers to the PCs, is only an outcome of her principle stand.

It is the duty and responsibility of the legitimate political representative of Lankan Tamils, to present what they really mean by their demand for the “full implementation of the 13A”. So far, no such report is available. If the Tamil leaders do not want to have another missed opportunity in the political history of Tamils, they should act rationally and prudently with a comprehensive and pragmatic work program.(newsin.asia)