From Aluthgama and Post-Easter Sunday to COVID-19: Muslims Again at the Margins- Shreen Saroor

The entire world is grappling with the COVID-19 pandemic. Although Sri Lanka has had only seven deaths so far, we too are scrambling to contain the outbreak. Social distancing, face masks, curfews for weeks, home-quarantine, detention, cordons and contract tracing constitute the new normal against this dangerous virus. In this uncertain time, it is critical not to alienate and discriminate against minority communities. Arbitrary and discriminatory actions in response to the virus not only threaten ethnic harmony but, by making victims scared to come forward, they risk exponential spread of a virus that knows no ethnic boundaries.

Sri Lanka has managed to keep the spread at reasonably low tide in comparison to many other developing countries. While preventive measures could have begun earlier, the hard work of all those on the frontlines who have kept the virus in check so far is to be celebrated. At the same time, however, the government’s COVID-19 emergency measures, particularly in a context without a sitting parliament or functioning judiciary, have weakened the necessary checks and balances. With an executive determined to rule through the military and ad hoc measures often run by family members, civil liberties and democratic institutions are at grave risk. There is reason to fear that exceptional measures to control COVID-19 – notably the contact tracing technologies in the hands of security and intelligence forces – will result in the normalization of intense surveillance of society at large and more effective policing of dissent.

Another danger in the government’s approach to the virus, however, is already putting lives and freedoms at risk. In recent weeks, the Ministry of Health amended the circular regarding disposal of bodies of deceased COVID-19 patients. A circular released on 27 March, consistent with previous health regulations, allowed cremation or burial within 24 hours. This changed with the Ministry of Health’s Provisional Clinical Practice Guidelines on COVID 19 Suspected and Confirmed Patients, dated 31 March, which made cremation the only option. Muslim religious norms do not permit cremation, and the amended circular has caused great distress within the community.

Until 30 March, the Ministry of Health webpage listed burial as a safe option for COVID-19 victims – but the death of the first Muslim victim saw a rushed cremation that made the guideline disappear overnight. The victim passed away on 30 March around 7 pm at Negombo base hospital, and the cremation was completed overnight, without permitting any family member to see the body. (It is perhaps no accident that the forced cremation occured in Negombo, a location of the ISIS-inspired terror attack that killed 142 worshipers and maimed many others at St. Sebastian’s Church on Easter Sunday the year before.)

Thereafter, the Director-General of Health Dr. Anil Jasinghe, who supervises all medical doctors attached to government hospitals, acted swiftly and subtly to change the said guidelines to make cremation the only option – just days after he had appeared on television and confirmed to the viewing public that burial was safe. The revised cremation-only rules were made public on 1 April. The speed of the change and the overnight removal of the previous guideline suggests it was done to justify the wrongdoing on the 30th, which the family and Muslim religious and community leaders had protested against strongly. The family of another victim who died on 1 April was pressured to sign a form stating they consented to the cremation of their loved one.

On 1 April, at a meeting of many political party leaders and Muslim MPs, including those from the Prime Minister’s own SLPP party, this issue of burial was taken up but not treated with the sensitivity that it deserves. Dr. Jasinghe was present at the meeting but provided no scientific reason to disallow burial. Muslim leaders at the meeting requested the prime minister to appoint a committee of experts in the field to look into the burial option. Although the PM provisionally agreed to this proposal, nothing has been done so far.

On April 3rd the largest body that represents government doctors, the Government Medical Officers Association (GMOA), wrote to Dr. Jasinghe asking him to consult a team of experts on the issue of burial, while drawing attention to the fact both Sri Lankan law as well as WHO guidelines permit burial. To date, there has been no expert consultation.

The current government’s guidance is inconsistent with that of the World Health Organization (WHO). On 24 March, the WHO released guidelines for safe handling of deceased COVID-19 bodies. As the WHO states, “It is a common myth that persons who have died of a communicable disease should be cremated, but this is not true.” Because COVID-19 is a respiratory illness of the lungs primarily transmitted through droplets (unlike Ebola or Cholera), “dead bodies are generally not infectious.” Those preparing the dead body for final rites must wear protective equipment, and those who view the dead body must wash their hands. But with these precautions taken, “people who have died from COVID-19 can be buried or cremated.” In creating its science-based guidelines, the WHO emphasized that countries and healthcare systems should respect and protect the “dignity of the dead, their cultural and religious traditions, and their families.” Contrary to what happened in Negombo, the WHO also recommends avoiding hasty disposal of COVID-19 dead bodies. 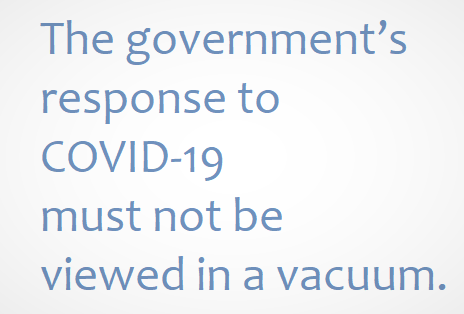 On 8 April 2020, four U.N. Special Rapporteurs, whose mandates cover religious freedom, mental health, minority rights, and protecting human rights in counterterrorism, wrote to President Gotabaya Rajapaksa. They criticised the Ministry of Health’s amended circular as arbitrary and discriminatory – not only is the cremation mandate not based on science, it also disproportionately impairs the Muslim minority’s right to freely practice their religion. The requirement of cremation is also counterproductive, they argue: by “provoking the reluctance of families and communities to report COVID-19 cases in fear that they may be unable [to] ensure proper funeral or burial rights for their loved ones,” the disease is more likely to spread.

The government’s response to COVID-19 must not be viewed in a vacuum. A year ago, Sri Lanka suffered its worst terrorist attacks when IS-linked extremists bombed churches and luxury hotels. The previous government had intelligence reports that Zahran Hashim intended to carry out attacks on churches and tourist sites, but these warnings were completely ignored. The blasts killed 269 civilians, 45 of them children, on one of the Christians’ holiest day. There has been no effort to create a safe space for communities to mourn and offer condolence. To date. no one has been prosecuted for this heinous crime, but people’s understandable fears have strengthened the power of the military and security agencies and increased anti-Muslims attacks and hatemongering.

After the Easter attacks, Muslims faced immediate retaliation. Although Kathankudy Muslims had long warned government officials about Zahran, Muslims throughout the country became victims in the aftermath of the attacks. The same anti-Muslim sentiment that propelled riots and mob violence in Aluthgama and Dharga Town in 2014, and again in Kandy district in 2018, sparked violence against Muslim homes, businesses, and places of worship. In Hettipola, a tiny town where Muslims had always lived alongside their Sinhalese neighbors in peace, mobs threw kerosene bombs at homes and mosques, forcing Muslims to run for their lives. Many Muslim women reported seeing police officers stand by as buses of Buddhist extremists arrived to join the riots. Rumors spread unchecked that Muslim restaurants were poisoning the food or that Muslim doctors were sterilizing Sinhala women. In Negombo, mobs threatened refugees and asylum seekers from Muslim countries, pressuring landlords to evict whole families overnight.

Authorities eventually stepped in and made pleas for calm, but not before lives and businesses were shattered. Hate monger-in-chief Gnanasara Thero, in jail for contempt of court, received a presidential pardon and immediately warned of a “carnival” if a Muslim minister and two governors did not resign their posts. A ban on wearing face-veils – which had played no role in the Easter bombings – made every Muslim a perceived outsider and left many women afraid to leave their homes. Hundreds of Muslim men were rounded up under Emergency Regulations and the Prevention of Terrorism Act (PTA), based on nothing more than owning Qurans or notebooks with Arabic script.

Nothing has been done since to reach out to these communities and rebuild trust. After the U.N. Special Rapporteur for Freedom of Religion Ahmed Shaheed visited Sri Lanka, he cautioned that “Prior impunity has strengthened the anti-Muslim groups. Weak and un-coordinated responses to anti-Muslim violence have seen the rise in violence and attacks on individuals and the communities in some parts of the country.” The Government categorically rejected these findings on 3 March as “inaccurate,” dismissing outright what the Muslim minority and human rights groups know to be true. In recent days, Hejaaz Hizbullah, a well-known attorney, has been arrested under the PTA, leaving Muslims even more uncertain as to how to speak out without fear of retaliation.

Prior to the election there was a talk about “one country and one law”. Muslim women’s rights activists had fought hard to reform the Muslim Marriage and Divorce Act to be on par with Sri Lanka’s other marriage laws, and the ground was set for such a reform. Instead of carrying forward the process, however, the current government appears ready to abolish the law, which shows how tolerant this government would be and how prepared it is to accept the diversity and pluralism in our societies. Two private media channels currently appear hell bent on branding Muslims as the introducers, carriers and spreaders of COVID-19 in Sri Lanka. This has alienated Muslims further, and if continued at this rate, the hate campaign can curtail the community from coming forward voluntarily to report cases. It has also created a picture for many Sinhalese of Muslims as unpatriotic and untrustworthy. This is an image that the extremist Bodu Bala Sena (BBS) and its allies and certain politicians have been aggressively promoting since the end of the war.

This much we know to be true: a virus cannot distinguish a Muslim from a Tamil or a Sinhalese, a Buddhist from a Catholic or Christian. To control its spread, it is critical for the government to take a science-based approach. Citizens must trust the government and feel safe to seek prompt medical attention when they have symptoms. The current cremation mandate and social ostracisation of Muslims affected by COVID-19 will serve none of these goals. Instead, enforcing arbitrary directives in conflict with the WHO will only deepen distrust and prevent Muslims from seeking prompt testing and medical attention. It would be foolish to imagine that this global virus, which knows no international borders, can run unchecked within one community without affecting public health outcomes for us all. For the safety of all Sri Lankans, if nothing else, now is the time to build trust and ethnic harmony, not sow division.