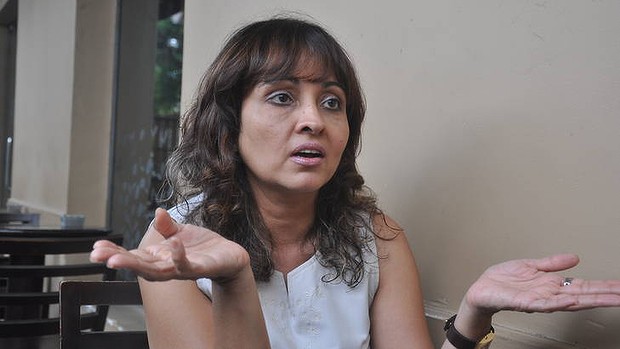 A Sri Lankan newspaper editor – threatened by a senior government official and brother to the President that she would be killed – has had an asylum claim to resettle in Australia rejected.
Frederica Jansz was last month sacked as editor of The Sunday Leader by the newspaper’s new owner, whom she described as an ally of the Sri Lankan President, Mahinda Rajapaksa, allegedly because she refused to stop publishing articles critical of the Sri Lankan government, and, in particular, the President.

In July, the Defence Secretary, Gotabaya Rajapaksa – the President’s younger brother – threatened Ms Jansz during an phone interview that she might be harmed for her criticism of the government. The interview, on speaker phone, was heard by several people.

A transcript of the exchange was published in The Sunday Leader and the accuracy of the quotes was not disputed, Ms Jansz says. Her predecessor as editor Lasantha Wickrematunge was killed by unknown assassins.
Mr Gotabaya Rajapaksa’s office did not return calls from Fairfax Media this week, but in previous interviews has not denied reports of the conversation, but said Ms Jansz harassed him, and that the language he used was in ”very common usage”.

In the face of growing pressure on The Sunday Leader, and after receiving several written death threats, Ms Jansz made an application, through the Australian High Commission in Colombo, for a humanitarian visa to resettle in Australia.

She was rejected, Australian immigration officials ruling she did not face persecution.

”I’ve never wanted to leave, this is my country. I’ve always said I’m proud to be a Sri Lankan and I wanted to bring up my children here,” Ms Jansz said in Colombo this week.
”But I have received written death threats … and I am convinced they are going to throw me into jail, to teach me a lesson. And they are going to do it soon.”

Relations between Sri Lanka and Australia are acutely sensitive while both countries seek to stem the flow of a record number of asylum seekers leaving Sri Lanka in boats bound for Australia.
A spokesman from the Department of Immigration and Citizenship said he could not comment on individual cases, but that, of more than 42,000 applications for humanitarian visas to Australia last year, only 6700 could be accepted.
”While most applicants have suffered some form of discrimination or persecution, the limited number of visas available and the high demand for places means that only the most compelling cases are able to be resettled in Australia.”

In a country where most media is owned by government officials or its business allies, The Sunday Leader is regarded as the most outspoken in its criticism of both sides of politics, and has a history of confrontation with those in power. Supporters say it is a lone independent voice among the country’s acquiescent media, while critics argue it is biased, and carries a personal enmity for the President.

The paper has been shut down by the government’s censor and its presses firebombed twice.
Lasantha Wickrematunge was assassinated by gunmen on motorbikes as he drove to work in January 2009. No one has been charged with his murder, but in the weeks before he died knowing his life was in danger, he wrote an editorial to be published posthumously, saying: ”when I am finally killed, it will be the government that kills me”.
The government denied any involvement.

Since taking over as editor, Ms Jansz has received several written death threats, including, in recent weeks, one written in red ink, almost identical to that received by Mr Wickrematunge three weeks before he died.
And despite ”being silenced” with her removal from the paper, Ms Jansz says she still feels under threat. ”I still feel very much under persecution. I do not know when they will come, but they will,” she says.

Ms Jansz was sacked after a 72 per cent stake in The Sunday Leader was bought by an associate of the Rajapaksa family, Asanga Seneviratne.

His business dealings, including property developments and investment schemes, have previously been the subject of Sunday Leader exposes.

Ms Jansz says she was pushed out because she refused a direction from Mr Seneviratne to stop running articles critical of the government. Mr Seneviratne did not return calls from Fairfax Media this week, but has previously rejected Ms Jansz’s claims.

The newspaper has remained robust in the weeks since Ms Jansz’s sacking, but it has pulled some opinion columns felt to be too critical of the government.

Sri Lanka has one of the poorest press freedom records in the world. Violence against journalists is common.

Reporters without Borders ranks Sri Lanka 163 out of 179 countries on its Press Freedom Index 2011-12.

”Murders, physical attacks, kidnappings, threats and censorship continue in Sri Lanka despite the end of the civil war. The most senior government officials, including the defence secretary, are directly implicated in serious press freedom violations affecting both Tamil and Sinhalese journalists,” a report said.
Journalists for Democracy in Sri Lanka says at least 39 journalists have been killed since 2004.

Several other news websites, including five Tamil sites, have been shut down for ”maligning the President”; others have had their offices set on fire, and journalists have been abducted off the streets