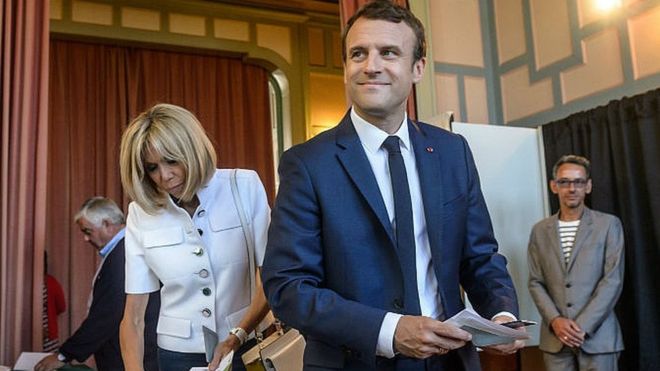 BBC/ The centrist party of French President Emmanuel Macron looks on course to win a landslide victory following the first round of parliamentary elections.

Mr Macron’s party was established just over a year ago and many candidates have little or no political experience.

The second round of the vote is held next Sunday.

Forecasts by two polling organisations gave LREM well over 30% of first round votes.

But turnout was low, around 49%, which analysts said reflected a sense of resignation among Mr Macron’s opponents.

The BBC’s Hugh Schofield in Paris says everything suggests Mr Macron has won another crushing victory with the only significant opposition coming from the centre-right Republicans.

The Socialists, who were most recently in power, are facing a historic wipe-out and the far-right National Front (FN) has also underperformed, he says.

Pollsters forecast the Republicans would win 20.9%; the FN 13.1%; and the Socialists with a grouping of left-wing parties 9%.

Mr Macron, 39, needs a majority to push through the changes that he promised in his campaign.

He has already left an impression around the world, in particular for standing up to US leader Donald Trump on issues like climate change.

There can be no disputing the extraordinary achievement of Emmanuel Macron. Yes, he has certainly had luck. But he has also foreseen with uncanny clarity how – with the right moves at the right places at the right times – the map of French politics was waiting to be redrawn.

If the projections from the first round are sustained, then the change that is about to happen to the National Assembly is as big as the one that occurred in 1958 when Charles de Gaulle brought in the Fifth Republic.

Scores, hundreds, of new MPs will be arriving who have never set foot in a debating chamber of any kind, let alone the country’s legislature.

It is all liable to bring a rush of blood to the head, and the greatest danger right now for Macron and En Marche is hubris. The victory is no doubt spectacular but so far it has all been electoral.

Phase two of the Macron master plan – actual reform – is the next challenge. And bigger.

After the projections were announced, a government spokesman said voters had shown they wanted to move fast on major reforms.

“This catastrophic abstention rate should raise the question of the voting rules which keep millions of our compatriots away from the polling stations,” she said.

The two established parties – the Republicans and the Socialists – both failed to reach the presidential run-off last month for the first time in France’s post-war history.

The Socialists risk losing not only their current majority but also most of their seats.

Those standing for LREM come from all walks of life and include students, retired citizens and a bullfighter.

Few MPs are expected to be elected in the first round of voting.

Only candidates who win more than 50% of the vote will take their seats, otherwise all candidates who secure at least 12.5% of registered voters will go into the second round to determine the winner.

The election took place amid heightened security after a series of devastating terror attacks in recent years.