Four years on, the IFJ remembers Prageeth Ekneligoda and calls for overdue action 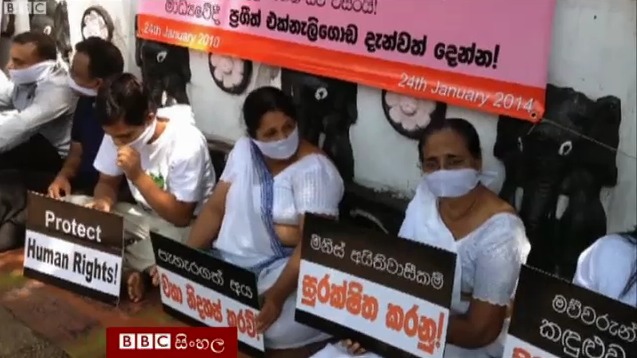 Today marks the four-year anniversary of the disappearance of Sri Lankan journalist and cartoonist Prageeth Ekneligoda. The International Federation of Journalists (IFJ) is calling on the Sri Lankan Government (GSL) to properly investigate Ekneligoda’s case and prosecute all those guilty of attacking journalists and news gatherers since the Rajapaksa regime came to power.
“The Sri Lankan government has an extremely poor and negligent record of investigation, both into Prageeth’s case and more broadly on threats to journalists since the end of the civil conflict. Instead of improving under this so-called democracy, the situation for journalists has continued to deteriorate,” the IFJ said.
“Globally, Sri Lanka’s standing on press freedom has plummeted as was witnessed in the political snubs shown by world leaders during CHOGM in late 2012.”
“For Prageeth’s wife and children, the daily anguish and agony continues without any hope or support from the the Government; meanwhile, media workers continue to be forced into exile abroad as a result of threats and intimidation.”
Ekneligoda, a Lanka-e-News.com online reporter and cartoonist, disappeared on January 24, 2010, two days before the country’s presidential elections. Ekneligoda is reported to have written several articles during the election campaign in favour of defeated candidate Sarath Fonseka.
Sri Lankan IFJ affiliate, the Free Media Movement (FMM), alleges Sri Lankan Government’s complicity in ensuring that the investigation into Ekneligoda’s disappearance was doomed to fail.
“From day one of the abduction/disappearance of Prageeth Eknaligoda the state agencies, namely the police and the National Human Rights Commission (NHRC), Government officials and politicians, have tried to delay, hinder or derail any investigation into locating Prageeth. Police didn’t accept the complaint and the NHRC acted in the same way,” the FMM said.
The Government’s claims that Eknaligoda was in exile have also been refuted by the FMM.
“State officials lied to the United Nations saying that Prageeth had been living abroad and Government politicians are continuing to make absurd allegations utilising parliamentary privilege. All these incidents combine to indicate that the government is not interested in a genuine investigation and that it has something to hide.”
“The issues surrounding Prageeth Eknaligoda’s disappearance are indicative of the climate of threat, fear and intimidation under which journalists in Sri Lanka live,” the IFJ said.
The FMM reports that since 2005, when the last phase of active hostilities in Sri Lanka’s long-running civil war began, more than 80 journalists have fled the country. The FMM has described this as an ongoing “war against journalism”.
The IFJ and its partners are concerned at the reign of impunity which continues to prevail over attacks on journalists and media institutions, and the constant fear under which individual media practitioners work.
“Despite overt measures of coercion being less conspicuous than during the war years, political and financial power is being deployed to silence dissent,” the IFJ said. “Victims of gross human rights violations during the war years are deprived of a forum through which they can articulate their grievances and seek redress.”
The IFJ has found that news websites hosting content on Sri Lanka have been subject to arbitrary rule changes and frequent obstruction with absolutely no legal or constitutional mandate.
Prageeth Eknaligoda’s disappearance and the obstruction of investigation and justice following stands as a stark reminder of the environment in which our journalist colleagues operate in Sri Lanka.
The IFJ urges the Sri Lankan Government to commit to resolving the investigation into Prageeth Eknaligoda’s disappearance and further calls on the GSL to commit to a raft of measures that would move to ensure press freedoms within Sri Lanka:
·         The restoration of independence and accountability to the state-owned media, if necessary by initiating the process of conversion to public service media.
·         The enactment of a law covering working conditions of all journalists and news-gatherers, in line with other South Asian countries such as India, Pakistan, Bangladesh and Nepal.
·         The enactment of a right to information law.
·         Prosecution, on the basis of credible evidence, of all who have been guilty of attacking journalists and news gatherers in the recent past.
·         An effort to bring back to Sri Lanka all the journalists in exile, with the assurance that their safety would be guaranteed by the GSL.
·         As an immediate priority, the IFJ urges the GSL to order a halt to the stream of hostile rhetoric over state-owned media channels.
·         The immediate allowance of free movement of national and international media staff all over the island, including the war-torn northern province, to allow the people who are yet to overcome the trauma of the last years of the war, to speak for themselves and be heard.
Share
Facebook
Twitter
WhatsApp
Pinterest
Email