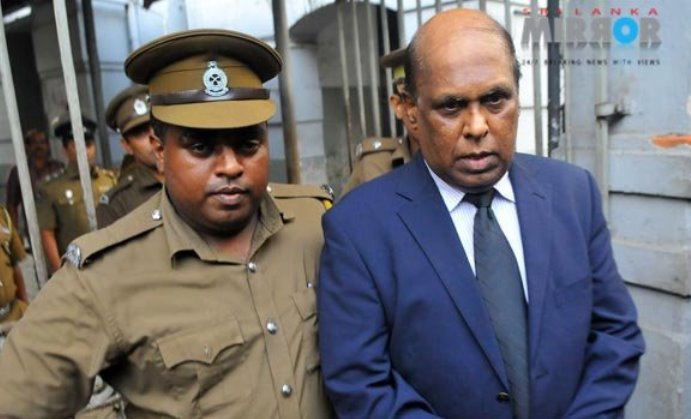 ( Senanayake being taken to prison)

He was produced in court and remanded till May 26.

Senanayake was arrested after being questioned earlier in the day and was accused of concealing evidence when he was involved in the investigations.

He was questioned previously as well in connection to the controversial case.

Earlier this month the police DIG in charge of motor traffic Amarasiri Senaratne was also questioned by the CID over Thajudeen’s murder.

The Colombo Additional Magistrate in February ordered the CID to arrest the suspects linked to Thajudeen’s murder.

Thajudeen died on May 17, 2012 in Kirulapone and his body was found in his car which had crashed into a wall.

According to police reports in 2012, the rugby player was driving home after attending a party when he lost control of the car and crashed into a wall on Park Road.

The police claimed that the car had exploded instantly and burnt the victim.

However suspicions later arose over the manner in which he died and it was believed that he was murdered. (Colombo Gazette)

Main charges against him are concealing evidence in the Thajudeen’s killing, covering up the crime and the related investigation and destroying evidence.

Also, there is adequate evidence to file murder charges against him, as per the penal code, a senior police official told Sri Lanka Mirror.

Produced before Colombo additional magistrate Nishantha Peiris, the suspect was remanded until May 26.

Making submissions to the court, the CID said Senanayake had instructed the former crimes OIC of Narahenpita police to treat the incident as a road accident and investigate accordingly.

Also, there is evidence that wearing civilian clothing, he had been at the scene of the incident in the early hours of the morning Thajudeen’s body was found.

He had also reprimanded in filth the policeman who has found and produced Thajudeen’s wallet to him, the court was told.

CID’s SP Shani Abeysekara also said Senanayake had pressurized two of his subordinates to treat Thajudeen’s death as being due to a road accident, and that there was adequate evidence to show that he had also concealed evidence and conspired to commit murder.
SriLanka Mirror