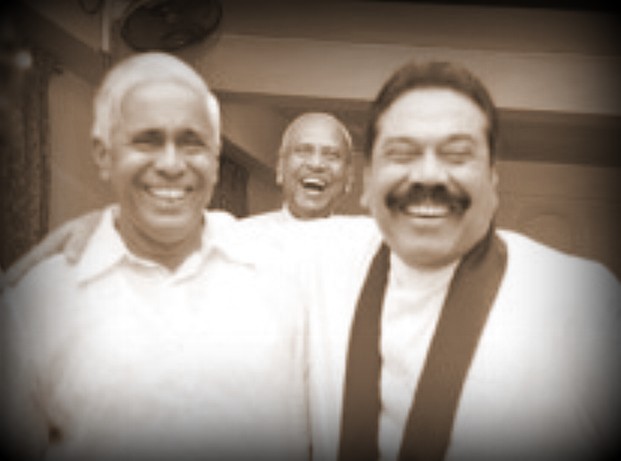 Rajapaksa regime is seriously contemplating bringing some amendments to Executive presidential system in the face of opposition campaign for total abolition of Executive Presidency gathering momentum. In two separate news stories, the Ceylon Today indicates that former Chief Justice Sarath N de Silva is drafting such amendment on behalf of the regime. Sarath Silva is a close collaborator of the President Rajapaksha.

Here are the edited versions of the two news items:

The government indicated yesterday that it was not for the abolition of the Executive Presidency in totality, but what it was looking at was constitutional amendments reducing its powers.President, Mahinda Rajapaksa, and the Sri Lanka Freedom Party top brass were now studying the possibilities of constitutional amendments regarding the Executive Presidency as there has been lots of debate on this subject over the last 30 years, Government Spokesman and Media Minister Keheliya Rambukwella told the weekly Cabinet news conference at the Media Ministry auditorium yesterday.

He also said that Rajapaksa, with all his political experience and acumen was also looking at that. However, the minister also denied any knowledge of former Chief Justice, Sarath N. Silva being appointed to a Committee to ascertain the pros and cons of the abolition of the Presidency and / or the clipping of its powers.

A Committee headed by former Chief Justice, Sarath Nanda Silva has been appointed to draft an amendment to the Constitution in the form of limiting the powers of the Executive Presidency, implementing the 17th Amendment with further amendments, and to completely do away with the preferential vote system.

The new draft will strengthen the positions of the Prime Minister, ministers and powers afforded to the Parliament, while also strengthening the powers of the independent Public Service Commission, Elections Commission, Judicial Service Commission and the National Police Commission as included in the 17th Amendment.
“Jathika Hela Urumaya Parliamentarian, Ven. Athuraliye Rathana Thera has handed over the responsibility of this task to me. I am working independently using my experience. After I have completed the draft, it will go to another group of intellectuals to get some feedback. This is really an effort to lessen the unlimited powers afforded to the President. After the Uva Provincial Council election is done we will hand this over to the President as we want him to implement our amendments to the Constitution,” Silva added.