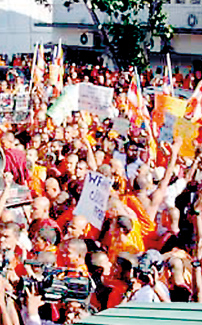 This Tuesday morning at the supposedly auspicious time of 8.30, a group of monks will leave Colombo in a motorcade to the Temple of the Tooth in Kandy. Their stated aim is to first obtain the blessings of the Sri Dalada for their vicious mission to fan religious and communal fires again. Then Cry Halal! And let slip the rabid beasts of bigotry.

This is the second time this year this same group of monks will be launching the anti-Halal campaign aimed against Muslim sentiments. The first was launched in February and, after a month of agitation; they declared victory on March 17, four days before the crucial UN Human Rights vote on Sri Lanka and made a public promise not to raise the Halal issue again. Now a re-run anti-Halal campaign is being launched on the eve of Lanka hosting the Commonwealth Summit. Coincidence? Bid to gain ‘silence’ money? International conspiracy to further blacken the Sinhala image? Your guess is as good as mine.

If patriotism is the last refuge of the scoundrel then religious fanaticism must be the first resort of the politically bankrupt blackguard. The phenomenal rise of this brigade of renegade monks calling themselves the Bodu Bala Sena and their hold on the national stage in so short a time is evidence of it.

From the first virulent flow of vituperative slime that cascaded from the steps of the BMICH — where they held their first convention last year in July — to seep into the nation’s collective thought stream, their venomous flood has continued unabated and, though it irrigates hotbeds of faith’s animalistic fervor sprouting violent passions and threatens to rip the fragile fabric of religious harmony, no serious effort has been taken by the Government to dam its ebullient tide.

For a nation still convalescing from the horrors of a 30- year war provoked by racial discrimination to complacently accept in its stride the potential birth of another war, this time based on religious acrimony, borders on criminal negligence. To acquiesce and watch it grow unchecked, to look askance while its parasitic tendrils that have lost its taproot spread around to ultimately throttle the body politic is to invite disaster on an unimaginable scale.

Far worse than a war based on race and economic considerations is a war propelled by the dictates of faith. And bear in mind that, though we may have emerged as the victors in the battle for a separate Tamil homeland on Lankan soil, the war for Eelam is far from over. On top of that by flirting with religious discord and tacitly encouraging extremists to come out from the woodwork, we are playing dice, nay, Russian roulette, with Lanka’s fate.

But evidently this nation has not learnt one iota from the mistakes made nor has it, it appears, for all the lip service paid to the efforts of reconciliation, any intention of building bridges being more intent, instead, on burning more boats. Is Lanka’s capacity to commit error after gross error infinite? Is her irrationality beyond the ambit of human comprehension? And to what catastrophic end would all this much vaunted abominable ranting by demagogues against other religions lead?

As Shylock the Jew warns in Shakespeare’s play: “If you prick us do we not bleed? If you tickle us, do we not laugh? If you poison us, do we not die? And if you wrong us, shall we not avenge?”

It is best to remember the Buddha’s enunciation of the doctrine of Karma which states ‘every action has a reaction’: and to note that, while the Muslim community may seem sitting ducks for any band of thugs to vent their perversions upon today, the day may not be far away when Nemesis, in the form of Taliban terrorism or an Arab oil embargo, keeps her tryst on Lanka’s shores. What would then be the fate of 20 million Lankans in the face of a worldwide Muslim Jihad against Lanka?

It is the tragedy of our times that, when this Government has ushered in an unprecedented era of development, the benefits of which will be reaped by future generations, the dastardly acts of one unholy element in society can threaten to bring the whole edifice crashing down.

How the Bodu Bala Sena could have risen to such heights to flaunt its force so brazenly in just one year is beyond belief. The catalogue of their anti-Muslim activities carried out within so short a time should ring alarm in the highest echelons of power.

The infamous declaration made by its secretary at Maharagama in February last year that “Democratic and pluralistic values are killing the Sinhala race” and that the Bodu Bala Sena “must become an unofficial civilian police force against Muslim extremism” must galvanise all who cherish democracy and human rights to deplore with repugnance the neo-fascists tendencies of this organisation which have the effrontery to raise the Buddhist flag and claim to be the guardians of Buddhism.

Over 300 years of foreign domination by Christian colonial powers saw flagrant attempts at mass conversion of the natives and yet this nation remained Buddhist to the core. The great majority of the Sinhalese did not barter Buddhism for bounty or wage attacks against other religions but saved their faith by the simple means of practising Buddhist values of non violence to all and tolerance for other creeds no matter what they do as expounded by the Buddha. Turning the other cheek as extolled by Jesus Christ was preferred to the ‘eye for an eye’ maxim which Gandhi said only succeeds in “making the whole world blind.”

So what need is there today, when a Sinhalese Buddhist Government is at the helm of the State, when
Lanka’s Constitution guarantees Buddhism the foremost place and imposes a legal duty on the State to promote and foster the Buddha Sasana, for a bunch of self-proclaimed religious vigilantes wrapped without qualms in the venerated robe of the Buddhist monk and, in the process of exploiting it as a shield from the lance of public opprobrium, degrading it, to prowl the streets wantonly tub thumping a gospel of hate and bigotry totally against the fundamental precepts of Buddhism, ironically in the name of protecting Buddhism? With defenders like these, who needs attackers?