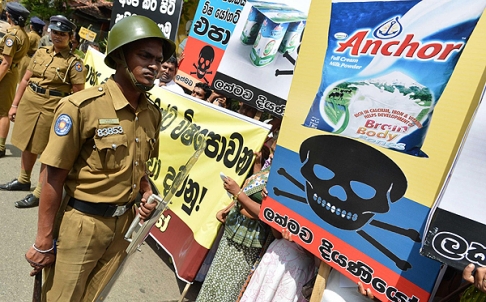 Earlier this week, it was banned by a Sri Lankan court from selling or advertising its products after the country’s food safety authorities said they found high levels of the agricultural chemical dicyandiamide (DCD) in two batches of milk powder it tested. Fonterra, which has been recently targeted by China for food safety bans, vigorously disputes the finding.

Four of Fonterra’s top officials have since been charged with contempt of court for failing to adhere to the bans, while a Sri Lanka state institute said it would test all milk powder in the market.

Industry observers in New Zealand say the row is not about food safety, but is an attempt by the government to promote its domestic dairy industry.

The debate triggered an angry demonstration on Thursday. More than 100 members of a hardline nationalist party in President Mahinda Rajapaksa’s ruling coalition gathered outside Fonterra’s regional offices near Colombo to demand a ban on the company’s products in the country as riot police looked on.

“The temporary suspension is the right thing to do. It is a precautionary measure to ensure our 755 people working there are safe,” Chief Executive Theo Spierings said in a statement.

Speaking to Radio New Zealand, he added that it was unclear when operations would resume in the country.
Fonterra’s critics in Sri Lanka yesterday said the protests were prompted by the company’s disregard for legal rulings.

“We did not request Fonterra to close down. What we wanted is to make sure that Sri Lankan people, mainly the children, do not get DCD-contaminated milk,” said Saman Rathnapriya, a leader of the National Health Services Union, the main petitioner for the ban on the company’s products.

The action in Sri Lanka follows a global food scare after Fonterra said that some of its products could contain bacteria that can cause botulism. Its products have been removed from shelves in about nine countries, including China, while other countries have restricted imports.

In New Zealand, Sri Lanka’s actions are widely seen as a move to pressure Fonterra and promote local dairy farmers.

“There clearly are industry politics going on over there,” said Keith Woodford, professor of farm management and agribusiness at Lincoln University. “There’s no doubt that Sri Lanka wishes to have its own dairy industry.”