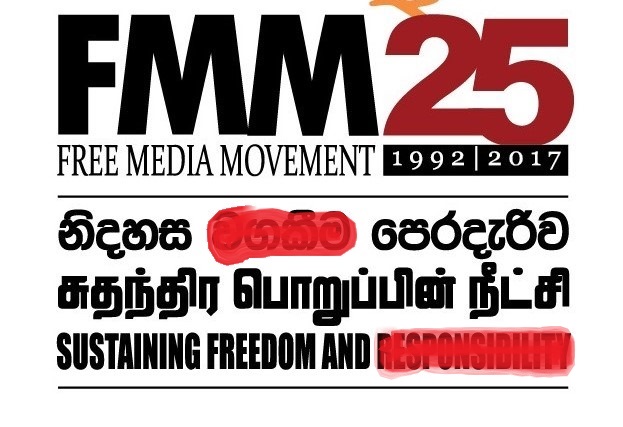 In a strange twist, the Free Media Movement of Sri Lanka, which has been in slumber while mainstream media of the country were propagating anti-minority sentiments after Easter Sunday attacks, has now come out opposing requests made by the government  asking not to publish  unnecessary photographs and unconfirmed reports in relation to ongoing security operations.

Many Sri Lankan media institutions violated citizens right to privacy by telecasting video footage of military entering private residences, accompanied by media and showing inside the houses and frightened innocent inhabitants. Media labelled every person arrested on suspicion as a terrorist. Anti- Muslim propaganda was rampant in some of the mainstream media. But FMM kept strange silence while all these unethical reporting was on going.

On the top of all these,  in recent times FMM has not taken up many a violations of  freedom of expression and  association rights that affects minority communities in Sri Lanka. (SLB)

The statement issued by the FMM follows:

Whilst recognizing that we should expect an ethical consideration and discipline from the local media in their reporting of the Easter Sunday attack and the related investigations at this time, the Free Media Movement wishes to strongly emphasize that we cannot be satisfied regarding the intrusive mediation of the government during this time.

Through the Panel Discussion organized to commemorate the world press freedom day and our previous statements, we have continually stressed the importance of media acting responsibly when reporting sensitive matters during this period. However, this should be achieved through a common understanding amongst the media fraternity, after identifying ethical guidelines agreeable to all, and not through a bureaucratic process. The Free Media Movement believes that both the government and the media institutions have a facilitating role but without an authoritarian government intervention.

It is extremely important to communicate the truth to the general public with regard to the current situation in order to ease the fear and suspicion of the Sri Lankan citizens in the aftermath of the Easter Sunday attacks. Whilst recognizing that unnecessary value can be assigned to unofficial information in the absence of truthful reporting to the people, today the country requires clear guidelines in managing the media, which will close the avenues for the spread of false information.

Therefore, the Free Media Movement calls on all those responsible to reach an agreement for an ethical guideline with the participation of the local media fraternity, avoiding the authoritarian interference initiated and carried out by the government.
C.Dodawatte
C.Dodawatta
Convener – Free Media Movement