Flying Fish Fins clipped before flight ;Anyone can ban a film but not everyone can make one: Sanjeewa

The uproar caused over the screening of the film Igilena Maluwo (Flying Fish) at the recently held French Film Festival at the BMICH in Colombo has snowballed into a major controversy with the Criminal Investigations Department (CID) probing if the producers of the film violated the conditional authorisation given to them by the Defence Ministry to film actors in military uniform.

A senior CID official told the Sunday Times that an investigation has commenced and they would submit report after viewing the film. “We want to see if the contents of the film have brought the image of the Sri Lankan armed forces into disrepute and if the film maker has violated the authorization given to them by the Defence Ministry to use military uniforms,” he said.

Lakshman Hulugalle, Director General of the Media Centre for National Security (MCNS) also confirmed an investigation is underway but said details cannot be divulged immediately. The uproar has also exposed the lack of co-ordination within state institutions that deal with issues of authorisation and censorship for the cinema industry of this country.

Instead of following consistent guidelines in deciding the merits and demerits of a film, what seems to be in place is a “knee jerk reaction” system that resorts to objections raised by a few who decide that a cinematic creation is unsuitable to be watched by Sri Lankan audiences. 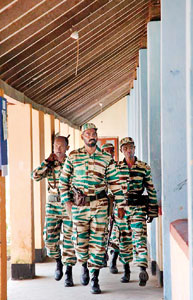 Stills-from-the-film
Stills from the film

And while the Public Performance Board (PPB) decides on the suitability of films that should be viewed by Sri Lankan audiences, the controversial film has been sent overseas at least seven times to represent the country at various film festivals without any prior scrutiny of its content and without any objections from the authorities, the Sunday Times learns.

The controversy around Flying Fish, by debutant director Sanjeewa Pushpakumara started after the Board of Management of the Bandaranaike National Memorial Foundation decided on July 13 to suspend the three day French Film Festival “on account of the contents of and the sentiments contained in the Sinhala film “igilena maluwo.’ In a statement , the Board said their decision to allow the film to be screened at a Committee Room of the BMICH was based “entirely on the basis of the certification for screening awarded to this film by the PPB.”

An official attached to the BMICH when contacted by the Sunday Times said that when a request is made to screen films at the BMICH premises, permission is granted if the PPB had approved it. In the statement, the Board also apologised to the “general public and the heroic armed forces of the country” for permiting such a film to be screened. Asked who had informed the Board that the contents of the film were harmful to the image of the armed forces, the official said some officials who had seen the film had done so and based on that the rest of the Festival was suspended.

Igilena Maluwo was screened at the BMICH on July 11 which was the opening day of the Festival organised by the French Embassy in Colombo. The Embassy had received the certificate of authorisation from the PPB on the condition that it was a onetime screening to a select audience without children.

The French Embassy said they had adhered to all these conditions. PPB Chairman Gamini Sumanasekera who is caught up in the thick of this controversy said that the Board had followed the laid down procedure of granting permission for films to be screened at Festivals. “When a film is submitted to us for limited screening at a Film festival, we watch it and give a rating but we do not censor its contents. Only copies that are submitted for public screening are censored at times if we feel the contents are unsuitable,” Mr.Sumanasekera said.

He added that the opinion of the defence authorities were sought if the PPB members felt that the subject was detrimental to the image of the armed forces but that too was only when it was a film for public screening.” Those who are invited to view a film at a festival consists of peers and students of cinema and others linked to the industry, hence a limited audience.

Mr. Sumanasekera said Igilena Maluwo was given an X rating which meant it was only meant for adults
However, while the PPB is authorised to scrutinise what is suitable or unsuitable for viewing by the local public, the film had been sent overseas at least seven times to represent the country at various film festival without any scrutiny.

When a locally-produced film is sent overseas for screening at a film festival, what is required is a clearance letter from the National Film Corporation (NFC) addressed to the Customs at the airport to allow the film to be taken abroad.“We give the producer a certificate to get Customs clearance to take the film overseas. That is the procedure that is followed,” NFC Chairman Asoka Serasinghe said.

Kelum Palitha Maheeratna of Asia Digital Entertainment (Pvt) Limited which produced the film said that allegations that necessary Ministry of Defence authorisation had not been obtained to film the actors in military uniform were incorrect. “We got written permission from the Defence Ministry before making this film. Permission was granted on the conditions that the film should not show members of the armed forces in a derogatory manner and we felt the film did not do that,” he said.

Since the uproar over the film, statements have been recorded by the CID from Monohan Nanayakkara, the producer of “Igilena Maluwo” and another official of the Company. They have also taken a DVD copy of the film and of the Defence Ministry’s authorization letter to assist in the investigations the Sunday Times learns.
Mr. Maheeratne said that Asia Digital Entertainment had extended support to the director of the film, Sanjeewa Pushpakumara in keeping with the company’s policy of assisting up and coming film makers. “As producers, we do not stifle the creative freedom of the director. Once a film is completed and ready for public screening we submit a copy to the PPB to decide on its suitability,” he said.

Igilena Maluwo a low budget film with a production cost of around Rs 2.5 million was completed in 2011. “We were in no hurry to have a public screening of this film because we have five other films produced by the company pending release,” he explained.

Mr. Pushakumara who is studying advanced film direction in South Korea told the Sunday Times that the film was based on some of his personal experiences growing up in a village in the Trincomalee District.
Meanwhile the fallout of this controversy is likely to cause more stifling by state authorities on the creative freedom of independent film makers.

As a fallout of the controversy Mr. Sumanasekera of the PPB said it was time to rethink the procedure followed when granting permission for films to be screened at Festivals. “We have discussed this with the President and we may have to change the procedure to avoid a repetition of this kind of situation,” he said.
The Board of Management of the Bandaranaike National Memorial Foundation is also set to meet on July 25 where they will review their policy on granting permission for films to be screened hereafter at the BMICH.

Anyone can ban a film but not everyone can make one: Sanjeewa
Igilena Maluwo is a film that intertwines three stories set in the backdrop of the war in Sri Lanka and its director Sanjeewa Pushpakumra has drawn from his own experiences as well as those around him to bring before the audience the varying human emotions, frustrations, social upheavals among people living in a war-affected community.

“The film is a multi narrative and what I have made into the film are based on my own experiences as well as those of my family members and others who lived in our village during the time of war,” Sanjweewa said in a skype interview.

He hails from the village of Habalagamuwa situated between Trincomalee and Kantale, an area deeply affected by the war.

He defended his film saying that it did not show anything other than the reality of living in a war affected society. “As a film maker I have to be creative and I have used my skills to make the film as well as I can,” he said.

The film has been nominated for several international awards and has won many including the Critic’s Choice Award at the 5th New Jersey South Asian Film Festival in New Jersey, USA, the Best Director Award and the New Territories Competition / St.Pertersburg International Film Festival, all in 2011.

Sanjeewa draws inspiration from the life and works of his role model, the late Russian filmmaker Andrei Tarkovsky whose works were subject to severe censorship under the communist regime in the 1960s and 1970s. “Anyone can ban a film but not everyone can make a film. There are very few people in the world who have the creative ability to come up with a good film and Tarkovsky was one of them, “said Sanjeewa.
Even though the fate of Igilena Maluwos now hangs in the balance and it is unclear whether it will ever be screened publicly in Sri Lanka, Sanjeewa said the ultimate reward for him will be acceptance by the local audience. “I may win accolades abroad but what I want is for the Sri Lankan audiences to see it and get their reaction,” he added.

Protest against film while artistes and activists unite against ‘intolerance’
Disabled soldiers were among a group of people who held a protest last Thursday in Colombo against the film Igilena Maluwo.

The protestors carried placards condemning the film saying its contents were harmful to the image of the members of the armed forces and accusing those behind the funding of the film of being LTTE sympathisers.
Meanwhile, film makers, media personnel and members of civil society organisations held a news conference in Colombo to condemn a state-run television station for drawing in well-known writer and columnist Gamini Viyangoda into the controversy surrounding the film by accusing him of being behind the funding of it.
Mr.Viyangoda categorically denied he had any link with the film or its producer or director. “I have nothing to do with this movie and I am perplexed as to why I have been drawn into this,” Mr.Viyangoda said. Others who addressed the news conference said the government’s attitude towards this film was a reflection of the intolerance towards those having a differing view from those in the establishment.

“This is not about one film but about the kind of intolerance that has become rife in our society,” well known film director and playwright Dharmasiri Bandaranayake said. 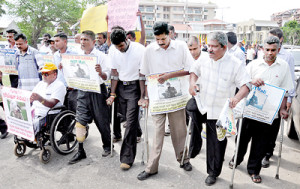 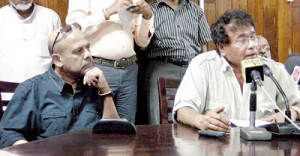