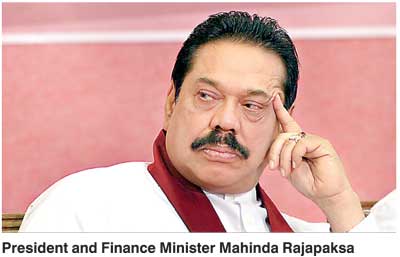 The report card of the Government’s fiscal management so far appears to be under the weather with revenue and expenditure goals going off-track but the Treasury has expressed confidence in finishing the year with the originally announced Budget deficit of 5.8%.

“Overall revenue performance continued to remain mixed,” the Finance Ministry said in the statutory Mid Year Fiscal Position Report released yesterday. Total state revenue for the first four months of 2013 was Rs. 314 billion, down by 4% or Rs. 12.6 billion in comparison to the corresponding period of last year. The Finance Ministry said the total decline in revenue from import base taxes amounted to Rs. 21 billion in the first four months.

The Finance Ministry report also provided provisional data for the first half of 2013 which also reflects a 3% dip in revenue to Rs. 509.4 billion in comparison to a year earlier and a 3.3% increase in expenditure to Rs. 861.6 billion. The report however didn’t indicate the 1H target set as per Budget 2013.

On an annualised basis the deficit was 11.8% of GDP. The full-year deficit target set in Budget 2013 was 5.8%.
However, the Finance Ministry said the continued improvement in income taxation, full impact of VAT coverage extension to retail trade, gradual recovery from the impact of adjustment measures, improvement in banking liquidity and lower interest rates are expected to improve Government revenue performance during the second half.

“This turnaround together with a closer monitoring of public expenditure management within the overall budgetary ceilings is expected to be conducive to maintain fiscal deficit at 5.8% as announced in Budget 2013,” the Mid Year Fiscal Position Report said.

“These positive developments are conducive to improve the overall liquidity in the economy, expand private sector lending in support economic activities and strengthen fiscal performance during the second half of the year,” the Finance Ministry said.

Detailing revenue performance, it said income taxation generated Rs. 62,225 million in the first four months in comparison to Rs. 54,485 million during the corresponding months of the previous year showed a buoyant growth of 14.2%, reflecting a favourable consolidation of the impact of 2011 tax reforms which aims at lower rates and a broad base.

Tax revenue from wage income (PAYE) increased by 43.5% despite lower rate structure and higher threshold inbuilt in the post 2010 tax system due to higher wage income and employment liable to such taxes, collection of such tax at source as final tax and improved compliance from employers. Tax on interest imposed at source as final tax too recorded a higher growth of 51.2% reflecting the increase in deposit and yield rates on Government securities and growth in deposit base in the banking and financial system, as well as higher turnover of Government securities.

Corporate and non-corporate income and profit tax too increased by 7.9% due to a gradual completion of tax holiday periods by many companies and buoyant performance of banking and financial institutions, food and beverage, manufacturing and tourism and services despite the impact of continued slowdown in credit growth and the business of motor vehicles and financial leasing activities.

Tax revenue from indirect taxes on domestic activities also showed a positive movement. Tax revenue from VAT on domestic consumption at Rs. 42,757 million registered an increase of 11.3%. Reflecting the system improvement under single rate VAT of 12% as against dual rate structure of 12% and 20% prevented prior to 2011. Similarly, Nation Building Tax (NBT) on domestic activities increased by 10.5%. Special Commodity Levy (SCL) collected at the point of imports showed a 39% increase reflecting a higher tax rate imposed in support of maintaining a stable remunerative domestic producer margins in agriculture commodities.

On the negative side, the Finance Ministry said that revenue performance continued to suffer due to a decline in motor vehicle imports, cigarettes and liquor volumes. Consequently, VAT revenue from imports declined by 11.9% and NBT revenue from imports by 16.4%, the decline in Excise (Special) Provision Tax primarily imposed on motor vehicles was 36.9%. The contraction in imports of motor vehicles, home appliances, textiles, chemical products, wheat and maize and continued exemption of several items in support of exports Ports and Airports Development Levy also declined substantially by 23.8%. The total decline in revenue from import base taxes amounted to Rs. 21 billion in the first four months. The decline is a reflection of the impact of corrective measures adopted from February/March 2012 to reduce imports and stabilise Balance of Payments.

The total Government expenditure in excess of Government revenue produced an overall deficit of Rs. 343 billion or 3.9% of GDP during January-April 2013 in comparison to Rs. 285 billion or 3.8% in the corresponding period of 2012.
FT