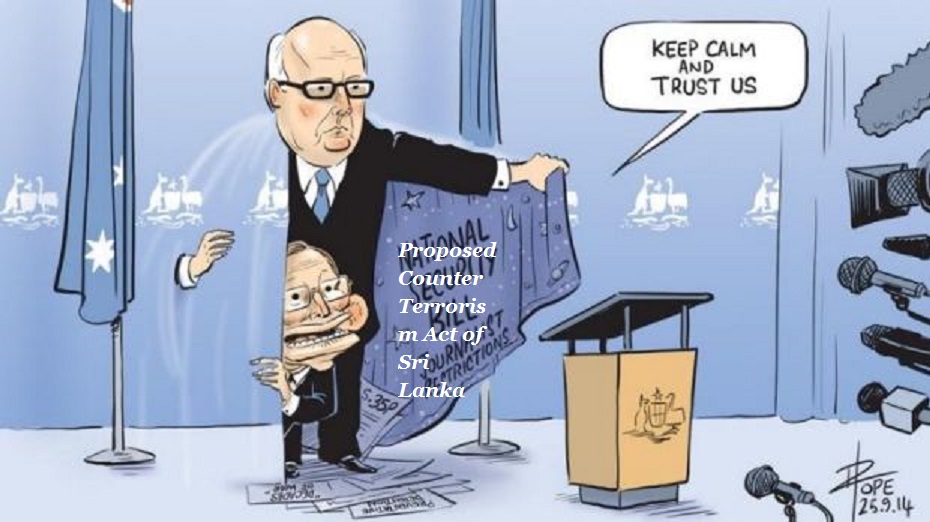 The Foundation for Human Rights (‘FHR’) and the University of Pretoria’s Institute for International and Comparative Law in Africa (‘ICLA’) have collaborated to produce this joint paper. The authors of the joint paper are Prof Christof Heyns, Director of ICLA and former UN Special Rapporteur on extra-judicial, summary or arbitrary executions; and Toby Fisher, a London based human rights barrister. The review represents the authors’ independent opinion.

Counter-terrorism legislation in Sri Lanka has been used in the past to facilitate human rights abuses including arbitrary arrest and torture of detainees. In response to widespread domestic and international calls to repeal the much-criticised Prevention of Terrorism Act, the Government of President Sirisena committed to replace it with a human rights compliant framework for combatting terrorism. On 25 April 2017, Sri Lanka’s Cabinet approved the Policy and legal framework relating to the Proposed Counter Terrorism Act of Sri Lanka (‘PLFCTA’).

The PLFCTA does not provide for a human rights compliant framework for combatting terrorism.

In terms of the PLFCTA a range of powers will be conferred on the Government of Sri Lanka, including the ability to arrest; to subject suspects to lengthy pre-charge administrative detention; to seize and confiscate assets; to impose curfews and travel bans; and to proscribe organisations. All are potentially oppressive measures that interfere with fundamental rights. Accordingly, the trigger for the exercise of those powers should be tightly circumscribed.

A fundamental problem with the PLFCTA is that the offences to which the Act relates are defined in such vague and broad terms that the extraordinary powers conferred on the executive by the Act apply to conduct that does not, on any reasonable assessment, amount to terrorism. That failure tightly to define the offence of terrorism and other offences is not in line with the international law principle of legal certainty and gives rise to a real risk of abuse.

That risk of abuse is heightened by the powers conferred by the Act that lack effective judicial or other safeguards. First, the PLFCTA permits lengthy periods of administrative detention without charge and without effective judicial oversight. Secondly, it provides for the conferral of extraordinary powers on the police, without the need to show reasonable cause and without effective judicial oversight, to search and seize, to conduct a physical examination, and to require a bank, service provider, or government institution to provide confidential personal information. Without adequate safeguards these powers interfere with fundamental rights binding on the State and are likely to amount to a breach of, inter alia, Articles 9 and 17 of the International Covenant on Civil and Political Rights (‘ICCPR’) to which Sri Lanka has been a party since 1980.

Further, although the PLFCTA includes some measures to mitigate the risk of torture, it does not go far enough.

If Sri Lanka is to replace the Prevention of Terrorism Act with a human rights compliant framework for countering terrorism, Parliament must ensure that substantial revisions are made to the PLFCTA during the drafting process. To enact a law based on the current PLFCTA would perpetuate the discriminatory, abusive application of counter-terrorism laws, which in the past have often been used to target one part of the population.