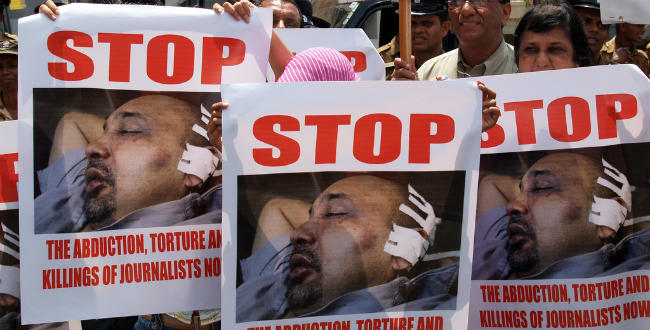 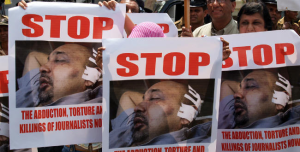 Sara Nics
“If you are not with the government, you become an instant traitor to the country. They said I should be killed; very clearly, they said I should be killed.” In his 30-year career as a reporter and editor in Sri Lanka, Sunanda Deshapriya says he was non-political, but his reporting on the 25-year civil war and human rights violations in the country rubbed the government the wrong way.

Branded a traitor, his life threatened, Deshapriya sought asylum in Switzerland. Although he continues to write about his home country from afar, Deshapriya knows his stories would be stronger if he was free to be a reporter in Sri Lanka.

“I talk to people back home and try to get a feeling for the story, but… I know my stories are not really full of flesh and blood,” Deshapriya says. “Because I am a marked person, I don’t want to associate with anyone openly in the country; I don’t want to get anyone in trouble. In that sense, it’s difficult sometimes to get the information about what’s happening.”

Over the past five years more than 70 Sri Lankan journalists have fled the country, fearing for their safety. Many more have been threatened, beaten or abducted within Sri Lanka. Thirty-four media workers have been killed there since 2004, and no one has been convicted in any of those cases. Deshapriya says he won’t feel safe going back to Sri Lanka until it’s clear that there is no longer tacit impunity for crimes against journalists.

The London-based Sri Lanka Campaign for Peace and Justice has just released a call to action to improve press freedom in the country. Campaign director Fred Carver says the Sri Lankan government seems to have no interest in promoting media freedom, actively working to shut down transparency and dialogue in the country. Rather than facing possible assault or assassination, Carver says many Sri Lankan journalist self-censor. “Clearly that is not a solution. That just plays into the government of Sri Lanka’s hands.”

In part, press freedom has been declining in recent years because of the threat of international investigations into possible war crimes committed during the civil war. “The government of Sri Lanka’s paranoia about a free media is – to a large extent  – driven by their fear of the international accountability process,” Carver says.

The action plan released this week calls on foreign governments and international media to support press freedom where the Sri Lankan government will not.

It asks foreign media organizations to use Sri Lankan correspondents, partially to keep international attention on Sri Lanka. Carver says working for foreign press may also help protect the journalists. “That gives them a level of protection in the eyes of the government. The government will not be so quick to bring the mob squads – the ‘heavies’ – against them because these are people who have international contacts and therefore will be missed.”

Perhaps more importantly, Carver says, they are asking other countries to make it possible for threatened journalists to apply for asylum while they are still in Sri Lanka. He says many journalists he’s talked with have told him that would help them feel freer to do their jobs well.

Sunanda Deshapriya applied for asylum in Switzerland when he was in Geneva in 2009, although he could have applied from within Sri Lanka. But Switzerland is the only country with an embassy in Sri Lanka that accepts asylum applications. The Dutch Immigration and Naturalization ministry – although it gives special consideration to journalists from Sri Lanka – only accepts applications from people who are already in Holland.

But Deshapriya says for many journalists, being granted refugee status might not be necessary.

“Journalists need a long term stay; we don’t need asylum,” he says. “We are here to survive and continue our work until the situation in Sri Lanka gets better enough to go back.”

Although working and living in Switzerland means he’s no longer continually looking over his shoulder, Deshapriya says he still doesn’t feel truly free. “Even here sometimes, I need to self-censor a bit. My colleagues and my family are still [in Sri Lanka], and I still want to go back.”

But he says he won’t feel safe in Sri Lankan until the government has made it clear that it will not participate in – or tacitly condone – attacks on media personnel. And Deshapriya will only believe that once the culprits in past attacks have been duly tried, convicted and punished.