Fighting corruption the PNG way; And the Sri Lanka way 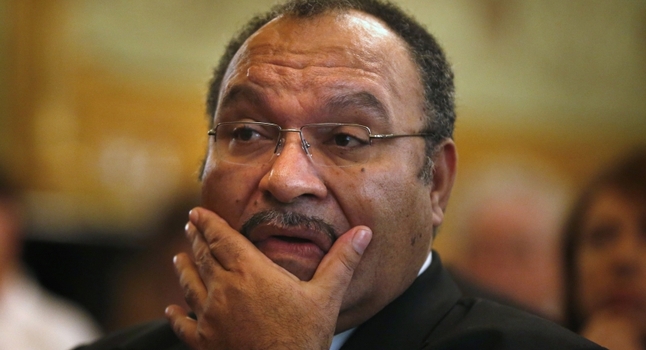 [Papua New Guinea’s Prime Minister Peter O’Neill ]
By Rukshana Nanayakkara —
Speculation has been rife about the transfer of the former Director General of the Commission to Investigate Bribery or Corruption in Sri Lanka. So far no official position had been given by the Commission itself or the government, which in principle has to stand for the independence and the proper functioning of the Commission.

Ceylon Today which broke the story quoted the Director General as saying she is unaware of the reasons behind her transfer. The non-response on the part of the Commission or the government paved the way for much speculation. Interestingly the transfer took place in the backdrop of a complaint to the Commission against its Chairman, Jagath Balapatabendi. According to newspaper reports the complaint against him continues to be un-investigated.

The pattern of government interference in the work of the Sri Lankan anti-corruption commission is a reflection of the commitment and promise of the government to fight corruption in this country. The action comes despite the rhetorical promises by the President, powerful senior government officials and secretaries to eradicate the menace of corruption in the country. Interferences by the State and the powerful in the independent functioning of the anti-corruption commission is not just a Sri Lankan phenomena. However, the responses on the part of the Sri Lankan Government, the opposition, media and civil society drastically vary in comparison to similar instances in other countries.

Arrest warrant on PNG PM
In June this year, the Prime Minister of Papua New Guinea (PNG) removed the head of the country’s anti-corruption task force after a warrant was issued by the task force for his arrest over corruption charges. The relevant charges alleged that the PM had authorized underhand payments worth millions of dollars to a law firm, which acted in collusion with the PM to loot money out of the country. The sacking of the head of the task force was accompanied by the sacking of a number of other public officials and police officers who were potentially to be involved with the investigation. This included both the Attorney General and the Police Commissioner of the country.

The Prime Minister’s action outraged thousands of Papua New Guineans who gathered in the capital city to mark their protest against the government. International pressure mounted on the country demanding the PM to respect and honour the rule of law and the proceedings of the Court. The PM himself went to Court to have the arrest warrant against him nullified. However, the Court which upheld the request of the PM, which decision is under appeal at present, made orders to the government to reinstate the anti-corruption task force and appoint a new Attorney General and a Police Commissioner. It also ordered the PM to refrain from interfering with the work of the anti corruption task force.

Sri Lankan scenario
At present the PNG case is far from being resolved. However, the re-instatement of the task force and actions taken by the government to uphold rule of law of the country sparks hope for the future of the country and its integrity.
When compared with the Sri Lankan scenario, the example of PNG highlights somewhat a success story, reflecting the strength of people and the anti-corruption community who managed to stand against powerful parties with vested interests.

It is clear that both the State capture of the independent commission fuelled by the 18th Amendment and the weak opposition in Sri Lanka have enabled the government to have a free hand to transform the Sri Lankan anti-corruption commission into a political tool. Sri Lanka is far from following the PNG example where the media and the opposition followed the matter with vigour in the interest of the public. In this country we hardly witnessed any censure, protest or outpouring of disgust by the people over the issue. The opposition hardly spoke against the transfer.

As with any other public institution managed and run by the tax payers’ money, the Commission at large is accountable to the people of this country. Given the stakes involved with the removal of the Director General, the Commission owes an explanation to the public, reasoning out the circumstances which led to the transfer.
As a matter of decency the failure of the Commission demands the resignation of the Commissioners. But this is a far-fetched idea in a political and administrative culture such as ours. Even so, at least a public apology is owed on the part of the Commissioners to the population at large. Sadly however, the Commission seems neither ashamed nor contrite of its own actions and omissions.

In this context it is worth quoting two examples highlighted in an article written by Niranjala Ariyawansha which appeared in the 28 July issue of Ceylon Today, as it aptly and remorsefully summarises the level of public accountability of the Commission to its people:

“The Bribery or Corruption Commission received a complaint several years ago against Minister of Ports and Ports Development, Rohitha Abegunawardhana, over the way he earned Rs 400 million. When media inquired about this from the Commission Chairman, Jagath Balapatabendi, he replied, “Yes, I remember that complaint but I don’t know what happened to it. It was a complaint lodged before I took office.”

“In 2014 a businessman from Maharagama called Dissanayaka was arrested by officials of the Bribery and Corruption Commission as he was soliciting a bribe from a person who complained to the Commission. Instead of remanding the suspect, he was admitted to the Colombo National Hospital. He was treated there for several months and acquitted on the basis that the evidence was not adequate. The suspect was revealed to be a close relative of a VVIP politician.”