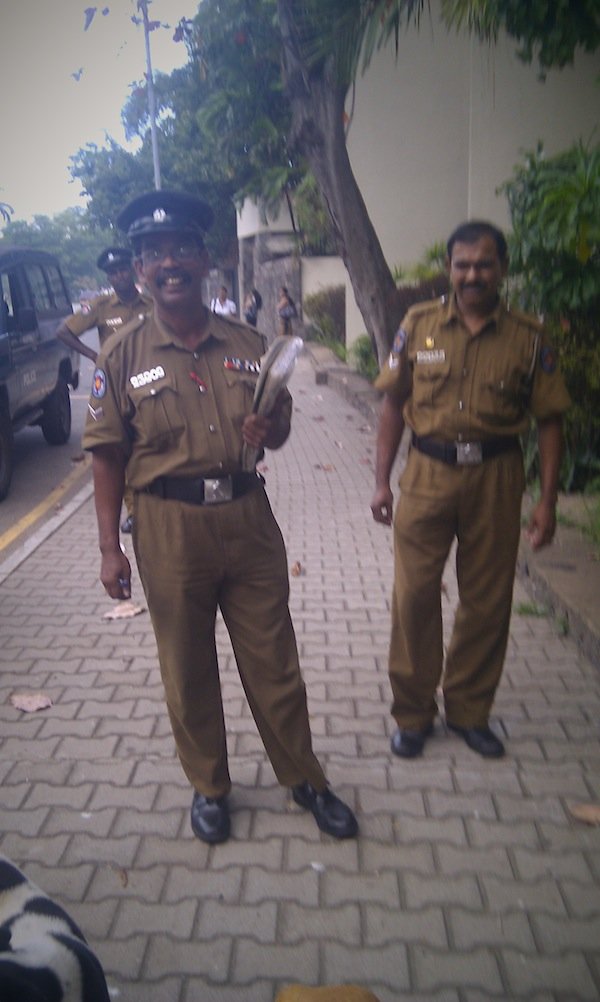 My husband and I have established a cat café at the back of the Cinnamon Grand Hotel where we have been feeding the cats every day for the last seven years. A cat café is basically an area where cats are fed at a regular time each day. Usually a cat café is set up at a hotel, school or other public place where cats would otherwise be attracted by a steady supply of food and become a public nuisance and, in countries like Sri Lanka which still has endemic rabies, a health hazard. Feeding them away from areas where people congregate while at the same time sterilizing and vaccinating them removes the nuisance and public health risk and allows cats and humans to coexist peacefully. We feed eight cats at the cat café and have sterilized all but one of the females and vaccinated all but that one particularly timid female.

Over this last school holiday period we have been employing a young lad doing his O/Ls as he is trying to help his parents to pay for the expense of his tuition classes and schooling. On Tuesday the 14th August, the sky was overcast and rain was threatening so I went down to the feeding area a little early leaving a message for the boy to follow when he arrived. I had started feeding the cats when two policemen pulled up on a motorbike and started watching me. This is nothing unusual so I was not concerned. Over the years, many people have pulled up in rickshaws and cars or walked over to take photos of the cats being fed and to tell me what a great job I’m doing and sometimes to ask me if I am doing it because I am Buddhist. Sometimes they are concerned that I am not feeding the dogs as well and I tell them that the dogs are fed separately well away from where people might be walking as they tend to block the footpath.

However, when my helper arrived it became obvious that the police wanted to stop me feeding the cats but hadn’t said anything because they assumed that I would not be able to speak Sinhala. Hearing them berating my young helper for his efforts, I promptly told them that he was only doing the job he was paid for and that their business was with me. By this time a carload of additional police officers had arrived on the scene. The senior officer in that vehicle called me over and wanted my name, address and phone number which I supplied and then asked what the problem was. He said that I shouldn’t feed the cats as the road was one that the President frequently drove along and I was causing environmental pollution and they had been instructed to stop me doing so. In Sinhala, they told my helper that this was the President’s road and he should pack up the food and leave. I pointed out that it was a public road and that I was not causing any environmental pollution as the cats eat the food from little individual plastic boxes and we clean up any mess prior to leaving. I invited them to come back and inspect the spot at any time during any day of the week and tell me if they were able to find so much as a single discarded Salaya skeleton. At this time a second police vehicle turned up with an English speaking officer in charge.

The first officer then told me that I would have to go down to the police station and make a statement to the DIG.

I said that I would be happy to come down and make a statement but that I intended to finish feeding the cats first as they are only fed once a day and their hunger was more of a concern for me than upsetting the President’s delicate sensibilities with non-existent environmental pollution. I also said that I would like to make a recording of the stated reason for taking me to the police station and presented him with the tape recording facility on my mobile phone. He refused to allow me to make a recording and directed the English speaking officer to bring me to the police station whereupon he and the other officers in the first car left the scene. At that point in time, there were some 6 officers present. Given that there were another 2-3 officers in the first vehicle, I think that some 8-10 officers had been applied to the task of stopping me feeding the 8 cats.

The English speaking officer was very polite and did consent to make a recorded statement stating the reason for my being required to go to the police station. I took some photographs of this group of officers and told them that I would come with them but that, if I did, I would be taking further photographs at the police station and would not hesitate to share these and the recorded statement with the press and my embassy. They then shut their book and left. I went back to feeding the cats. In answer to the questions of bystanders who had been watching the incident, I explained that the police had been trying to arrest me for feeding cats.
GV