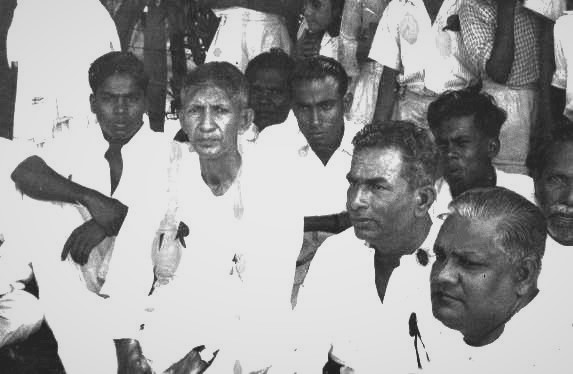 Image: Chelvanayagam at the 1961 sathyagrahaya.

When we were political cubs, we knew of Chelvanayagam as one who was the “father” figure of Tamil Nationalism. He was one Tamil political leader who was affectionately called “Thanthai” – meaning ‘Father’ – Chelva. Samuel James Velupillai Chelvanayagam dominated Tamil politics in the first 03 decades in post independent Ceylon.

I would say that Chelvanayagam was fortunate. He did not live to see the agony of the Tamil people and of Sri Lanka that got dragged into a long brutal war. He was fortunate that he was not there to shoulder the heavy responsibility that his most favoured political recruit, R. Sampanthan, is burdened with now as leader of TNA.

Chelvanayagam was a man of principles. He never compromised on his convictions and principles. He differed with leaders like G.G. Ponnambalama Snr. in the All Ceylon Tamil Congress (ACTC) and C. Suntheralingam on the issue of disfranchising the Indian origin Tamil labour. He stood by their rights consistently, as Prof. Ratnajeevan Hoole had recently confirmed.

Like both Mr. Sampanthan and Mr. Sumanthiran today, Chelvanayagam’s conviction that Tamil people need to be treated as equals in the island of Ceylon made him give up a very lucrative legal profession. This was a political position he was determined to work towards. He became a full time politician on his convictions.

It was the issue of the rights of Plantation Tamils that led to his departure from ACTC in 1950 to form the Ilankai Thamil Arasu Katchchi (ITAK). ITAK is popularly known as the “Federal Party” in English. A “federal State” was the fundamental Tamil political demand that Chelvanayagam stood for. How Chelvanayagam defined federalism was written in the resolution adopted at the first national convention of ITAK in 1951 in Trincomalee.

“The I.T.A.K recommends to the Tamil-speaking people the feasibility and desirability of establishing the autonomous Tamil linguistic state within the framework of a Federal Union of Ceylon, as the rational and natural culmination of centuries of close association between these two nations it is their common motherland and with a view to promoting and maintaining national goodwill and close co-operation with the Sinhalese people.”

There’s nothing about a “separate State”. Nothing about an “Eelam”. It is about living together in a single country; a “federal Union of Ceylon”.

What is “federalism”? Federalism is the most democratic form of power sharing within a single united country. It allows people in different regions to take care of their day to day responsibilities including their cultural life, while acting together as a single Nation State.

Chelvanayagam was a man born for peace. He was ever ready to sit and talk through issues, and to negotiate.

Regional Councils were clusters of 22 administrative districts then in Ceylon. All local government body members within a region were to elect Regional Councillors.

Certainly, Chelvanayagam went a long way to settle the issue with dignity. Having very badly being let down in 1957, he was once again willing to engage with Dudley Senanayake in 1965 to sign the Dudley-Chelvanayagam Pact.

Instead of Regional Councils, the compromise in 1965 was to “establish District Councils in Ceylon vested with powers over subjects to be mutually agreed upon between the two leaders”. The two main “Left” political parties, Samasamaja and Communist parties also played a racist role in 1968 to undermine the D-C Pact.

The First Republican Constitution in 1972 was also a bad let down for the Tamil people. This compelled Chelvanayagam to consider the option of a Separate State.

After 30 years in active Tamil politics from 1944, after he resigned his KKS parliamentary seat in 1972 as a protest against the ’72 Constitution, the Coalition government postponed the due by-election for 02 years and finally held it in 1975 February. Chelvanayagam polled over 72% at this by election. This was the highest ever percentage a candidate polled. He declared to the Tamil people, that this was a mandate for a “separate Tamil Eelam”:

“I wish to announce to my people and to the country that I consider the verdict at this election as a mandate that the Tamil Eelam nation should exercise the sovereignty already vested in the Tamil people and become free.”

So, to cut short a long history of promises, negotiations, agreements, abrogation of pacts and a brutal war, we still remain without a decent, workable, power sharing system to allow peaceful and productive living in this country.

Who is to be blamed? Both major political parties and the two traditional “Left” parties have to be held responsible for this catastrophe. That does not leave me out. I am also part of mainstream politics in the South.

In the 80’s, we were in a different political formation and we sacrificed many lives in Kurunegala, Moneragala, Anuradhapura, Badulla, Kalutara, Galle, Hambantota and Matara – all Sinhala local leaders who stood for power sharing within Provincial Councils. Vijaya Kumaratunge was the popular political leader to have lost his life over Provincial Councils. Thanks to the JVP, I still carry shrapnel in my nape as proof of our commitment to have provincial councils established. I suffered this not because I raised my voice on behalf of my own community, but for the rights of the Tamil people. I consider this an honour.

I have always stood for the rights of the Tamil people. And the more I stood for this, the more my vote bank in the South increased. That is because we have stayed consistent in our position, and the people trust us because of this.

We should have asked, “Why only for Tamils? We in the South also need federalism”. We need “federalism” because centralised power from the Parliament of 1947 to that of 2017 – for 70 years – have failed to develop the rural Sinhala society. Every Constitution – the Soulbury, the First and the Second Republican Constitutions – have centralised power in Colombo. The poor rural South has been left out. Even my district Kalutara, though within Western Province, is lagging behind the Colombo and Gampaha districts. We have not been telling the South they are poor because political power is centralised in Colombo.

It is therefore time, I believe, that we change our approach in politics to achieve national development within a stable and a peaceful Nation State. It is time for the South to go with Chelvanayagam’s formula – to have provinces “within the framework of a Federal Union” of Sri Lanka. That, I think, is how we in the South can respect and honour this great democratic, Tamil leader – S.J.V. Chelvanayagam – in post independent Sri Lanka.