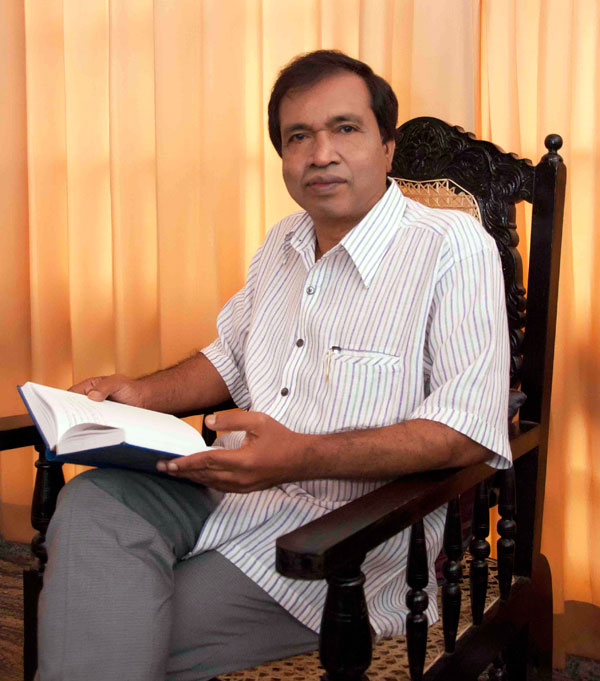 Susitha R. Fernando
One of Sri Lanka’s most widely respected and best known judicial personalities, retired High Court Judge W. T. M. P. B. Warawewa was outspoken not only during his judicial career but still speaks out strongly on social justice, judicial independence and democracy. Continuing his role in creating a just and fair society, Justice Warawewa has expressed strong views at several public forums. He recently headed the Public Tribunal to inquire into the huge tariff hike on electricity.

In an interview with the Daily Mirror Justice Warawewa explained why he decided to enter politics after his retirement and what his vision and goals were. He also shared his views on other issues like rule of law, good governance, party politics and the rampant corruption.

Q: Why did you decide to enter party politics and what would your vision and goals be in restoring democratic principles, good governance, rule of law, human rights and accountability?

I decided to enter politics because I’m truly concerned about the direction in which the Country is now heading. As a citizen of this country who was born prior to the country’s independence, I feel that unlike in the time we were governed by previous constitutions and the time we were also highly influenced by the British traditions, we are now heading in the wrong direction. Features of a democracy such as good governance, rule of law etc. have been shrinking for many years. It is the ‘Executive Presidency’ created by the present Constitution that is responsible for most of the ills we face today. Although there ought to be separation of powers among the three arms of the government, i.e the Executive, Legislature and Judiciary, the President is the head of the Executive, the President can attend and address the Parliament and performs Ministerial functions while not being answerable to Parliament. Also, the majority in Parliament represent the President’s Political party and it is the President who appoints judges to the Superior Courts. There is also Constitutional provision for the President of the country to enjoy blanket immunity from suits and to grant Presidential pardon to convicted criminals. The inevitable result is the creation of a dictatorship. Although the 17th Amendment to the Constitution was brought in with the approval of almost all the members in Parliament to offset this arbitrariness and control exercised by a single person having total control over some of the most important institutions and the public services, none of the governments that came into power attempted to implement it. The result of the 18th amendment was that it took away the limitation that the President could seek office only twice and created a Parliamentary Committee which replaced the Constitutional Council established under the 17th Amendment. This is how rule of law has become merely illusive. I want to make sure that this power remains in the hands of the people. The United National Party and also the civil organisation headed by Rev. Maduluwawe Sobitha Thero both have prepared discussion papers on a new draft constitution. What our country needs now is a new constitution with democratic freedoms which would change the prevailing system. Despite the promise to make our country the Wonder of Asia, today people across the country are struggling. No one seems to answer their pressing problems, enormous national debt; inadequate healthcare and unemployment are only a few of them. I want to raise my voice against the prevalent system and stand and represent the will of the people.

Q; As a senior and widely respected judge do you believe that the independence of the Judiciary has been seriously damaged – if so what steps should be taken to restore it?

The appointment process should be made transparent and only persons of suitable calibre and experience should be appointed as judicial officers. The 17th Amendment must be reintroduced and reinforced and the Judiciary must be free from any intervention by the government.

Q; The government often claims that the international community led by the United States is putting unwarranted pressure on it to respect human rights. Do you disagree with the government’s view and do you believe that the Sri Lankan people themselves should come out and take a stand for human rights because it is the people who have lost their human rights.

We live in a global village and therefore we cannot think in isolation. Sri Lanka is a signatory and has ratified most of the international instruments for the protection of human rights including the United Nations Covenants on Human Rights. We have an entire chapter on fundamental rights in our Constitution but we only see the declining state of human rights day by day. People are scared to raise their voice against the government, journalists are disappearing and being abducted, people cannot place reliance on institutions that implement the law, in this manner the government encroaches on the rights of the people.  If the government honestly attempts to secure the fundamental rights of the people, there would be no room for the international community to intervene and interfere. In a democracy, the government should be afraid of its people and the people should not be afraid of the government.

Q: Recently you spoke about the widespread corruption in the country and especially in the Ceylon Electricity Board (CEB). Most people are of the view that corruption in the CEB was the main reason for the recent marked increase in electricity rates. What would you do to effectively tackle corruption?

The CEB is only one of the institutions which run at a loss. Nearly 75% of electricity is generated using hydropower, however recently we saw that they waited till the rainy season started to effect repairs to the hydropower plants. Mismanagement and corruption are the reasons for incurring this loss. The increased electricity bill is too burdensome for the people. The actual cost incurred in generating 1 unit of hydro power electricity is very much less than what is imposed on the consumer, but the citizens of this country are never entitled to pay the actual cost. This is so even with regard to fuel prices. I will expose the corruption and take steps to fight it.The people of this country expect nothing else.

Q: Government and independent analysts are saying that the prolonged internal crisis in the UNP is one of the main reasons why the Rajapaksa regime is having its way and taking the country towards dictatorship. What role do you hope to play in bringing about unity in the main opposition party so that it could give leadership to the millions of people who are suffering?

Now there is a tendency of self-interested MPs representing an opposition party to cross over to the government for personal gain. I would say that this is unconstitutional as it is against the will of the people. However they are trying to legitimise this by relying on certain judicial decisions. One might argue that this weakens the opposition, but it is not so. The people will not give their mandate to these self serving politicians next time when they contest. Now the UNP is heading in the right direction understanding the demands of the people. They are aiming to change their own constitution for the country’s betterment. The main feature of the proposed draft constitution would be the abolition of the Executive Presidency. It also attempts to establish independent commissions, and to remove the preferential system of votes.

Q; How do you describe retired judges taking up political appointments immediately after their retirement? Would this affect the independence of the Judiciary and/or public trust on the Judiciary? In this light how do you justify joining politics after retirement?

Judicial officers should not engage in politics while they hold office. This does not preclude a judicial officer from engaging in politics after retirement. However people of this country are aware of instances where some judicial officers work as henchmen of the government throughout their judicial careers and accept political appointments on the very next day after retirement, which is difficult to justify in the same manner. People who want to put such constraints on retired judges must admit that once a judge retires he should be regarded as an ordinary citizen. As a citizen he too has the right to vote and the right to contest elections. If they want to prevent this they should take away his civic rights. However a judge must never engage in politics while he holds office. In fact some codes of Judicial Conduct in other countries expressly provide that if a judge is to engage in political activity he should resign from office, thus appreciating that it is only while holding office that a judge should not engage in politics. In my case, I have never engaged in politics during my entire career as a judge. After retirement I had the opportunity of working with several civil organisations and I spoke out about the problems prevalent in the country only as a member of the civil society. It was only very recently that I made the decision to join a political party. It is not when a retired judge decides to enter politics that the independence of the Judiciary and public trust on the Judiciary become affected, it is when the appointment of sitting judges becomes solely politicised as they  are appointed by a single person according to his whims and fancies.