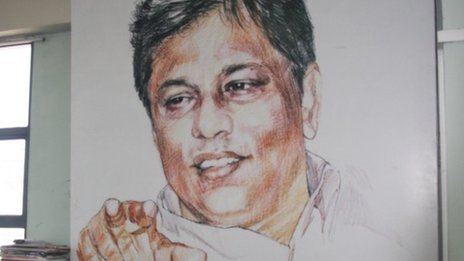 Almost four years after its editor was killed in mysterious circumstances, there are fears that Sri Lanka’s most outspokenly anti-government newspaper is losing its critical edge.

On 8 January 2009, the editor of the Sunday Leader, Lasantha Wickrematunge, was assassinated by a group of masked men on motorbikes. The case sent shockwaves around the world, highlighting the dismal state of press freedom in the country. The murder has never been solved.

The investigative, anti-establishment newspaper had riled the authorities and continued to do so after his death. But in July the near-bankrupt Leader was bought by a well-connected businessman.

In September the then-editor, Frederica Jansz, said he had sacked her for not toeing his political line. She then fled abroad citing fresh death threats.

Under a new editor the paper has issued retractions of past articles and has lost some of its most outspoken columnists. So, has the Sunday Leader lost its edge?

Today, as since its founding in 1994 by the man always known simply as Lasantha, the Leader offices sit in the same somewhat bleak suburban location, adjoining an industrial area.

You cannot miss the building, a large cream edifice with bright pink and blue stripes. Inside you realise that this is no ordinary newspaper.

There is a small garlanded picture of Lasantha above the lift and a huge portrait in the office. Framed cuttings are a reminder that the paper has been attacked many times: In November 2007 (with T56 guns, cricket bats and petrol), in 2005 (before the presidential election), in 1995 and 1998 (physical attacks on Lasantha and his home).

In 1998 he was interrogated by CID police and in 2003 and 2006 he received death threats, reportedly from people high in the political hierarchy. No one was brought to justice for any of the assaults.
Controversial apologies
The paper has just had a “relaunch”, which simply means a more sophisticated look, says the new editor, Shakuntala Perera.

“It didn’t mean a huge change in policy or editorial stand,” she says, fresh from the main weekly meeting.

The new owner, with a 72% stake, is a businessman, Asanga Seneviratne, who is president of the national rugby union and appointed the president’s son as captain of the national team. The other share remains in the hands of Lasantha’s brother, Lal.

Ms Perera says Mr Seneviratne has no editorial input and the paper has lost none of its radicalism despite the buyout.

“On the judiciary, we’ve been critical of the government stand,” she says, referring to a government campaign to impeach the chief justice.

“On the prisons [the death of 27 prisoners amid a riot last month], no paper has taken the strong stance we took… Any issue affecting the people will get a voice.”

Indeed, recent issues have contained some rigorous articles on the jail violence, quoting prisoners’ relatives as saying some of the deaths were summary executions; a detailed report on the mood in the northern town of Jaffna, a subject most papers ignore; and investigative articles about official bodies.

Set against these have been apologies for past articles which have raised the suspicions of critics.
Most striking was an apology to Sri Lanka’s defence secretary, the president’s controversial and powerful brother.

Angered at a phone call from Frederica Jansz in July, when she implied the national airline made a decision as a personal favour to him, he allegedly used obscenities and told her: “People will kill you!”

Last month the paper retracted the article and apologised to Mr Rajapaksa. It also rescinded and apologised for a series of articles from 2006 that linked the governor of the central bank to illegal financial schemes.
There has been a scathing reaction.

Frederica Jansz, in an emailed interview, said the retractions were “shameful” and the editorial team had “prostituted journalistic principle… merely to satisfy political masters” and “grovel”.

“The legacy that Lasantha Wickrematunge left has been destroyed – buried forever,” she said.

Sonali Samarasinghe, the widow of Lasantha and also now in exile, and the author of the pieces on the bank governor, said she stood by the articles which were backed by facts.

The retractions gave “little cause for optimism” and would “raise questions about the independence of the new editorial team”, she said. In the past, she said, the paper thrived on getting into deep water and did not fear legal action.

In response, the new editor said the apology to Mr Rajapaksa was not decided on under her auspices, while declining to comment on the other retraction.

The Leader’s associate editor, Mandana Ismail Abeywickrema, who has been at the paper for 15 years, said there had been problems with the tone of some of the journalism.

“There were a lot of personal feelings getting in the way of the writing after Lasantha died… Things had slipped,” she says.

“Lasantha would always tell us: Always have your facts right and keep your personal emotions away from what you write. This was not being fully followed.”

There is, nonetheless, unhappiness among some of the newspaper’s radical columnists.

One, Tisaranee Gunasekara, regularly accuses the country’s rulers of nepotism and megalomania. Last month she abruptly quit the paper after her column was clumsily edited with each reference to the Rajapaksas excised.

She told the BBC it was “not sensible to expect that I will be allowed to say nasty things about our royal family… in the new Leader”.

“I also regret it. I feel bad,” said Ms Perera bluntly on this episode, saying she was under time pressure when editing and this would not happen again. She wants Ms Gunasekara to return and insists that the column did not spook her. 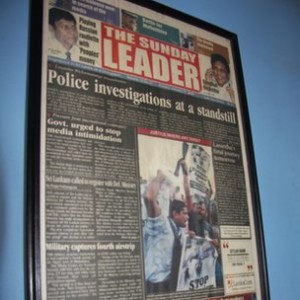 Yet recent remarks by the new owner, Asanga Seneviratne, in the magazine “Echelon” suggest the Leader may find it difficult to continue targeting the higher authorities so fiercely.

“To me, the president is our president, and whether you like it or not, he gave our country back to us,” Mr Seneviratne said. “Whatever anyone says, I will respect him for the rest of my life because of that.”
He denied asking Frederica Jansz to leave but admitted taking an exception to a caption she wrote and saying he was having difficulty trusting her actions and that therefore “I have to see what is going in the paper”.

Assessing the new order, it is impossible to avoid economics. The Sunday Leader had been doing badly and the government had pressurised advertisers to withdraw from it.

Gotabhaya Rajapaksa recently won a case against it and has two more pending. Fifteen lawsuits against the paper remain. So what future for the Sunday Leader?

“It’s not just any other paper, it’s really something people believe in and that needs to carry on,” says Shakuntala Perera.

Mrs Samarasinghe, however, believes the new management team will chart a new course.
She says she and her husband saw it as their duty to “speak truth to power in Sri Lanka’s largely self-censored media environment”. Will the paper continue to do this? The jury is still out.

Meanwhile, no progress has been made in bringing Lasantha Wickrematunge’s killers to justice.
One man held for the killing, an impoverished Tamil motor mechanic, died mysteriously in prison 14 months ago. His family called him an innocent man who would not even kill an ant.