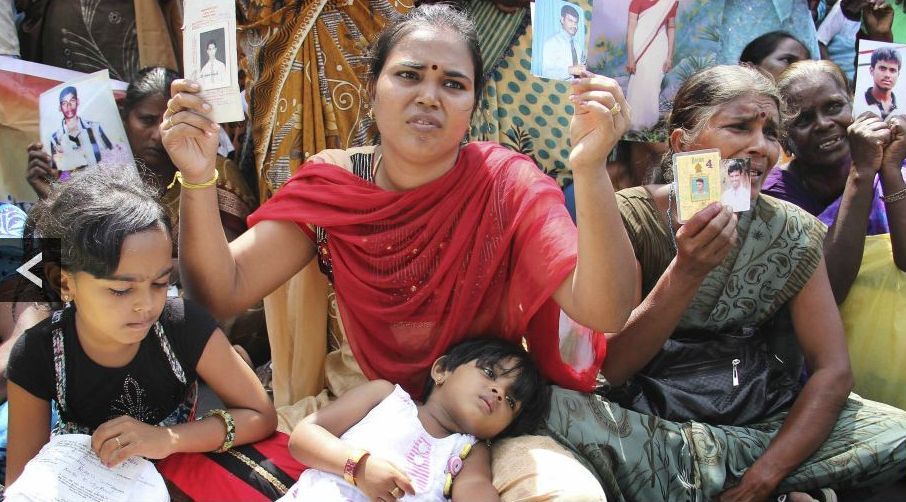 
A new set of Habeus corpus applications were filed in the High Court of Vavuniya by the families of persons who are missing after surrendering to the Sri Lankan Military. It was alleged by the Petitioners that after their harrowing trek to the Mullaithivu government controlled area they acceded to the request and announcement made by Sri Lankan Military authorities and decided to surrender.

The surrendees were lined up in a queue and were loaded in to the waiting buses. This was watched by their immediate family members who were hopeful that their kith and kin would return after inquiry and due process. However even after the lapse of four years the Petioners have not heard anything after the 18th May 2009. The petitioners state that they made complaints and filed information about the disappearance to the police, army, the President, the Human Rights Commission of Sri Lanka, the ICRC and International agencies but to no avail. In their fury they have cited the Human Rights Commission of Sri Lanka as one of the respondents in their applications alleging dereliction of statuary duties and for failing to investigate/inquire into the complaints.

The petitioners also made striking revelations that cluster bombs and chemical weapons prohibited under the international regulations governing war were used in the final assault. As a result of such cruel and brutal attack it is alleged that numerous people lost their lives. Even natural vegetation including tall Palmyrah and coconut trees were instantly burnt. Hand bills were dropped from the air announcing places of safety and no fire zones, but no sooner the people reached the designated locations Sri Lankan Air Force planes carried out attacks from the air killing further number of people.

Eye witnesses also stated in their petitions that an Indian ship under Indian flag also carried out attacks on the civilians converged on the land killing and injuring those who had gathered on the land for safety. Petitioners further alleged that there was scarcity of food and essential items due to restrictions on the food supply by the Sri Lanka Government who claimed that only 30000 -40000 civilians had been stranded in Vanni, but there were more than 300,000 who had to share the food supply that were supplied only for 30000-40000 people.

Thus there was starvation and severe malnutrition and sickness caused to the people by these calculated measures taken by the government to systematically starve the entire Tamil population trapped in the Vanni.
Petitioners also stated that a Christian clergy Rev Fr. Francis Joseph who facilitated the surrender to the Sri Lankan military was also taken together with the surrendees and that nobody has seen or heard of him ever since. Rev. Fr.Francis Joseph was a foremost educationist having been the Rector of St.Patrick’s College, Jaffna a leading and prestigious school in the island. He was 77 years of age at the time of his involuntary disappearance and had completed 50 years as a priest only the previous year.

One petitioner has complained that the entire family of her daughter consisting of the daughter, son in law and their children aged 10, 8 and 2 ½ years of age are missing. All petitioners alleged that the disappeared persons were last seen in the custody of the Sri Lankan army particularly the 58th Division deployed in Mullaithivu and the Vanni region and that the State represented by the respondents is accountable, answerable and responsible for the security, safety and wellbeing of those who surrendered to as well as those arrested by the armed forces. They have sought relief from the Court for the issue of a mandate in the nature writ of Habeus Corpus for the release of their relatives.

It was also stated that in the camps established in Vavuniya ,people were treated harshly , particularly young girls were treated in the most indecent, inhuman and undignified manner by Sri Lankan military ,police and Para Military groups in the so called refugee camps which were virtually detention and torture camps. The Petitioner and young girls were stripped naked and were insulted and abused. The petitioner further stated that these acts were motivated by racist tendencies but were condoned by the hierarchy of state officials present at and manning the camps.

After hearing the submissions made by Counsel for the Petitioners K.S.Ratnavale, on Monday 26th August, the High Court Judge of Vavuniya V.Chandramani directed notice be issued on the Commander of the Army and the General Officer Commanding of the 58th Division- Mullaitivu the 1st and 2nd Respondents returnable on 12th September.
28 August 2013,
DBS