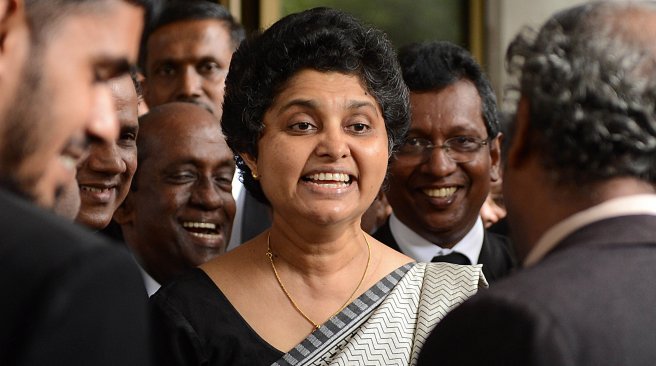 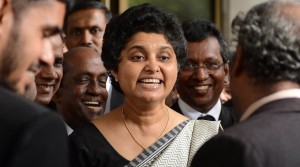 The lawyers of Chief Justice Dr. Shirani Bandaranayake, in a statement yesterday, denied recent media reports about their client receiving Rs 252 million into her bank account between 2010 and 2011 as a false and malicious attempt to bring disrepute.
It further stated that the media reports have been published in a manner to create the impression that Bandaranayake had Rs 252 million during a specified time, to create a totally false and distorted impression.
The full statement issued by Neelakandan and Neelakandan, Attorneys-at-Law and Notaries Public, reads as follows:
We are instructed by our client Dr. Shirani Bandaranayake to address this communication.
Our client’s attention has been drawn to articles regarding our client’s bank accounts in certain newspapers designed purely to defame our client. These articles, falsely and maliciously distort the truth in relation to our client’s bank accounts and declarations.
These articles seem to suggest that our client–
a.) has wrongfully withdrawn monies from certain accounts in order to show a zero balance as at the 31 of March of a particular year,
b.) was in receipt of sums of approximately Rupees 250 Million during the year 1st April 2010 to the 31 March 2011.
Our client at the very outset firmly states that both these statements are totally false.
The truth is as follows:
i.) Our client had investments in Government Treasury Bills which were invested for short periods of time because our client felt that she may have to access these monies at short notice.
ii.) These sums were credited to a special account opened by the bank to route investments from the realization of one Treasury Bill to the purchase of another Treasury Bill. This is the normal and regular procedure followed for several constituents of the Bank
iii.) These monies did not at any stage lie in the account for a period of more than a day or two.
iv.) All investments in Treasury Bills were duly and properly declared in our client’s
assets and liabilities declaration.
v.) A simple illustration may be useful.
If Mr. A had Rupees 10,000 in a 7 day Treasury Bill, at the end of the seven days that Rupees 10,000 together with the interest accrued is credited to the special account.

On the 7th day or the 8th day, the total money is re-invested in a new Treasury Bill for another period of seven days. This process continuously goes on for a period of one year. If all credit entries are added it would show Rupees 10,000 plus interest multiplied by 52 which is approximately 520,000 plus interest. However all that Mr. A in fact had was the original Rupees 10, 000 pIus interest.

vi.) This is what in fact happened in the case of our client. However certain newspapers have falsely and maliciously added up all the entries in a way that would create the impression that our client had Rupees 252 million which gives a totally false and distorted impression. In actual fact, our client never had Rs 252 Million or a sum anywhere close to the said sum.
vii.) Our client re-iterates that every single cent had by our client has been declared in the relevant declarations of assets and liabilities.
viii.) It is also clear that our client did not withdraw amounts from the account prior to 31 March of each year in order to create a distorted view. The monies were always in government securities at all times except for a day or two, between the date of maturity and the date of re-investment during which such monies were in the aforementioned special current account.
ix.) All Treasury Bills purchased on behalf of our client have been duly and properly declared.
x.) Our client is also surprised as to how certain newspapers have details of her bank accounts.
xi.) Our client is deeply disturbed that this information is now in the public domain when in fact such information should be private and confidential information in terms of the law.
xii.) We may add that the Chief Justice of the country, as a citizen is also entitled to
the protection of the law of the land.
xiii.) We may also note that these allegations have not even been raised as allegations in the impeachment process.
xiv.) Since wide publicity has been already given to the aforesaid allegations, we
would be most grateful if you could publish this letter in order to correct and clarify the matter.
Courtesy – Sri Lanka Guardian
Share
Facebook
Twitter
WhatsApp
Pinterest
Email