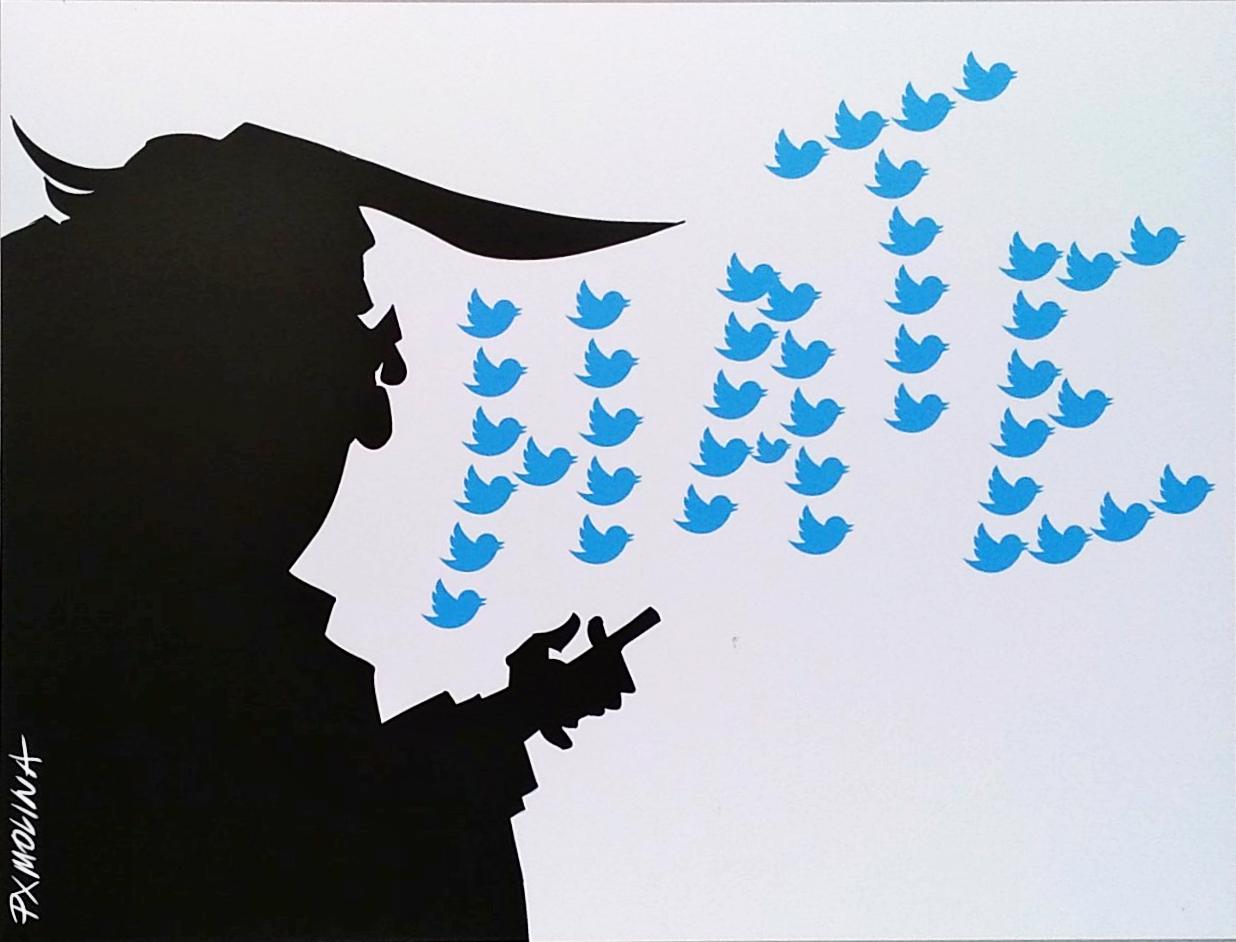 The world over a great threat has emerged against civilization as a whole. This is the power of fake news used with the technological assistance of a highly sophisticated modern technological industry. A vast body of daily reports of all types is spread through the internet and social media.

These publications cannot be held accountable for the truth or falsehood of what they publish. There are so many ways of circumventing even a proper attribution of a credible source for such information. All the legal principles used earlier regarding print media cannot be used effectively against the spread of false news items. Examples are the Laws of defamation, fraud or misinformation leading to damage for individuals or property. And this legal vacuum cannot be easily overcome. The fake newsmakers are aware of these limitations with regard to accountability. They can spread whatever they wish to spread without accepting any responsibility for their acts.

What makes such fake news so powerful is the fact that such news can be spread instantly to vast audiences within a very short time, counted by minutes or seconds. The very fact of publishing and distributing material on a vast scale creates a kind of impression–if the news is so spread there must be some truth behind whatever is being published. These impressions are the stuff with which credibility is attained about any sort of news. And now fake news uses this situation to their advantage.

Countering fake news is a very difficult, arduous and time-consuming exercise. To erase the impressions created by a single news item or a fake letter sent to a number of persons can take years. Fake news writers professionalize the creation of such fake news. Out of their own imagination, they make up a variety of stories looking at which is impossible to dismiss altogether. Most people who get such news do not have the time to look for verification. They may even dismiss such news items at a conscious level. However such information does make impressions. These impressions give rise to doubts which lead to behavior and reactions which may affect other persons adversely or irately.

There are different tactics adopted by fake news writers, such as selecting words, that may arouse a certain dislike or repugnance on just hearing them. For example, a fake news writer may refer to a person as not credit-worthy, with a bad reputation or having engaged in activities which society may condemn. Or, perhaps, calling someone an anti-Semite or a sexual abuser when there is no basis for these accusations or others like embezzlement, fraud or similar allegations. With that, goes adjectives, which create the feeling that the person or the organization referred to, is quite bad. By using such questionable words they can create mass impressions. These impressions are in articles which of themselves do not have any kind of real information or any provable actual information.

All over the world today we are seeing this in terms of electoral politics, whether it be in the United States of America or in Great Britain. This also includes almost every other country where enormous amounts of false accusations are lodged against popular political leaders. The main idea in promulgating such fake news items is to create bad and wrong impressions. As a result, at the polls, people may have doubts in supporting such a person or cause.

In third world countries this situation is even worse. A few persons who may have access to mass media channels could create a virtual reality that has nothing to do with the actual situation of a country. They effect this by hiring persons with an ability to engage in this kind of manufacture and distribution of particular fake news stories.

The worst aspect is that criminal justice institutions when manipulated by authoritarian governments can develop its own fake news industry. Before a person is arrested or exposed to some serious charges a huge campaign could be developed. So, when the actual violation of the rights takes place many people begin to have doubts as to whether these allegations can, in fact, be true. Such doubts prevent immediate reactions to what appears to be blatantly unjust and violative acts of the basic rights of the individual. This lack of resistance can also be a factor in discouraging persons who are more knowledgeable about the situation. Their intention was to place the truth before people in society as the fake news industry overtakes them and creates false impressions at every turn.

Worse affected in this are the people who express dissent. In the past, the very fact of representing dissent carried a certain moral prestige. Today, more and more with the use of fake news, industrial dissent can be discredited by attributing multiple motives to it. How do they do it? They portray a person or organization as agents of people having such agendas. They represent such dissent, not as people who are exposing a worthy cause. They are doing these things for their own personal or political agendas.

[alert type=”success or warning or info or danger”]This situation creates enormous demoralization and discouragement among persons who want to stand up for what they think is right and reasonable. Standing up to what they think is wrong, morally wrong and unreasonable, is less and less attractive. Any efforts in getting involved in genuine protests against people raises more problems than could be imagined.[/alert]

The direct victim of the fake news industry is the Criminal Justice System as a whole. This means the Police investigating systems, Attorney General’s Department (Prosecutor’s office) and the Judiciary itself. The fake news industry could even attack the Courts because they could hide their identities. The Courts themselves, by their very profession, are unable to engage in such activities as social media in order to defend themselves. While cases are filed for wrong reasons by interested parties, massive propaganda that percolates through the fake news may create another kind of trial. Serious crimes committed by accused persons thereby develop another kind of attack on the criminal justice system which is the trial by publicity.

There are two ways that a trial by publicity takes place. One is to portray a person or any group as guilty of what they are being accused of, thereby making them the target of social attacks. Then exert pressure on them. They would rather seek to find a compromise or a sentence of mitigation rather than to fight their cases in public. Public trials on sensitive cases become more and more dangerous for the public.

The second way the fake news industry affects criminal trials is by making or portraying the complainant as not a credit-worthy person. Therefore, the whole story about the violation is in fact made up. For example, if a murder takes place, this sensational type of news spreads quickly. Perhaps it was due to some personal affair than to deliberate, intentional killing of someone in particular. But it could be that someone happens to be a politically interested person, trying to achieve his or her aims through murder. Or it may be a woman subjected to rape or even gang rape. The fake news industry then will begin to spread derogatory remarks about the complainant. In such cases they make them appear to be persons of a bad character or a person making up these stories for some other dubious purpose.

A further way by which the fake news industry affects criminal trials is through various pressures created through false news events in the investigation of crimes. The investigators themselves get these investigations accredited without any real grounds for doing so. It makes the whole exercise of the investigation simply due to political purposes. And for a particular crime, things such as the murder of a journalist or an attack on some groups or persons or corruption are not motivated by genuine reasons.

[alert type=”success or warning or info or danger”]The result of all these explorations is: the investigators themselves running an investigation are otherwise punished. This is based on a massive propaganda campaign that goes to discredit persons who are involved in investigations.[/alert]

Another section of people who are seriously affected by the fake news industry are the human rights defenders themselves. Human rights defenders are engaged in numerous activities which include: defending the civil and political rights of others, defending environmental rights, fighting against corruption, defending the right of freedom of expression or assembly and lastly the rights for education and health. All these persons could be brought under severe attacks by the fake news spreading that all these activities are motivated not for altruistic reasons but for personal gain. In addition, there is corruption and other things involved in these activities or those activities are purely the propaganda work of powerful interested countries whose sole ambition is to destabilize other countries. Therefore, nationalism could be evoked against the human rights defenders who are often brought into disrepute and doubts about their work. The fake news even reaches the agencies funding support for these groups. They provide completely false information about allegations such as sexual abuse which has never happened or corruption or fraud or the like for which there is not the slightest evidence. And quite manipulatively these fake newsmakers use the languages or ethics that are respected in the West. They are trying to show that the ethical codes honored in the West have been violated by the groups that they support.

The fake news industry is not only widespread but it is also sophisticated and very subtle. Therefore, in the years to come, protecting and promoting the work towards the Rule of Law and human rights, will certainly be attacked manifold through these fake news channels and individuals. So we see that what is needed is to develop ways of dealing with these issues. In particular, human rights and democratic organizations themselves should develop their own capacity to deal with incoming information. They need a way to capably counteract problems in their initial stages, thus controlling the damage easily created by the fake news conglomerates.

Discussions by the public should necessarily involve discussions on the impact of fake news. Specifically, the impact on humane causes, ways of evolving global consensus and dealing with this enormous threat–not only to the work of human rights and democracy but to civilization as a whole.