Failures of Yahapalana Govt and challenges before us – Radika Coomaraswamy 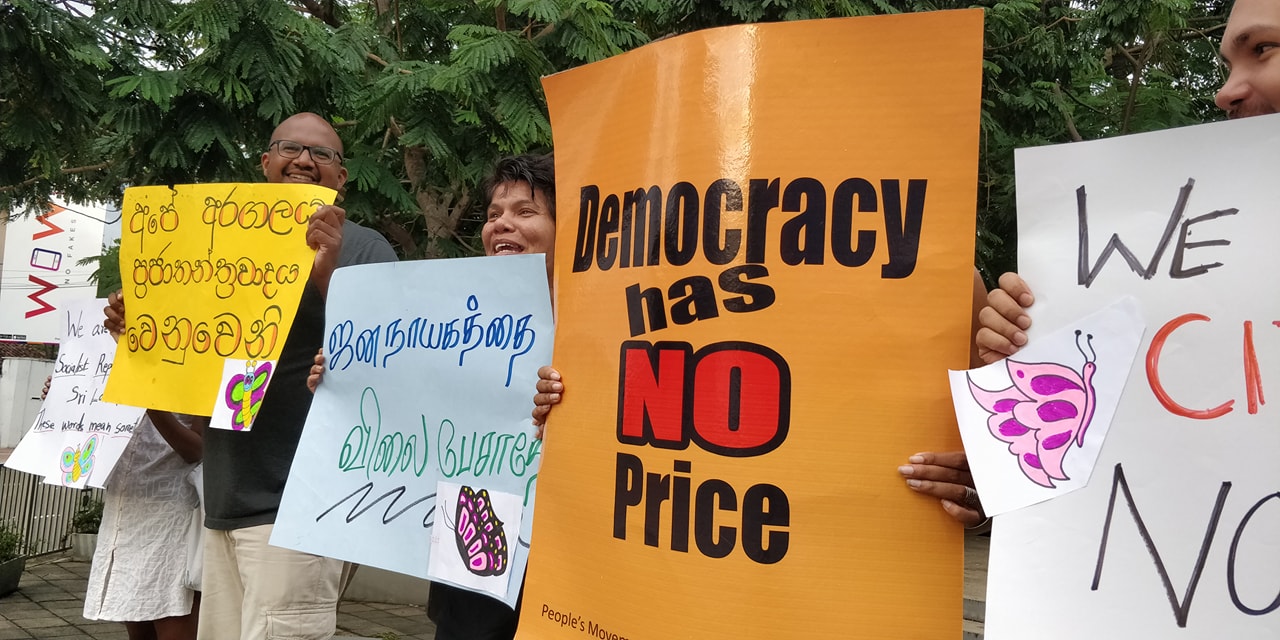 Many of us were hoping for a new dawn in 2015. The hope for a ‘Yahapalanaya’ Government now leaves ashes in the mouth of many people. It is true they brought us back our freedom and strengthened independent institutions but they failed fundamentally in convincing people that democracy and freedom should be the pillars of our social fabric.

Dysfunction at the top, alleged corruption, bureaucratic performance and resulting chaos has made people clamour for strongmen and dictatorships. The values on which diverse groups came together in 2015 – democracy, freedom and social justice – have now become dirty words among many.

In this article I will not focus on personalities. I will just reiterate the case for democracy, freedom and social justice as absolutely crucial for our society and our position in the world and urge the public to vote accordingly. All the candidates must address these issues. It is obvious that lessons must be learnt and the manner of doing business drastically changed from what failed in the last few years but that is no reason to give up on our values altogether.

The first and most important principle of a democracy is civilian oversight of the military and the insulation of the military from partisan politics. The exemplary behaviour of the tri-forces during the October 2018 constitutional crisis was an example of how militaries behave in democracies. The use of the military for partisan ends or to serve the personal interests of the political executive is the beginning of the end of democracy.

Today the police and the security forces not only have extraordinary firepower but surveillance and intelligence-gathering capacity. This has increased since the Easter bombings. If this power is used in an arbitrary, partisan manner to suppress freedoms and destroy individuals we will suffer as a society. My work from Rohingyas in Myanmar to US prisons reinforces the notion that the independence and professionalism of security actors is absolutely necessary for the health of a democracy.

Thuggery is not an alternative

The second most important institution for a democracy to survive is the judiciary, especially with regard to criminal cases. It is the foundation of the rule of law that gives security to the general population. A judiciary and a criminal justice system that feels comfortable and safe to do its job properly will ensure that impunity will not prevail. Otherwise we will be ruled by intimidation and thuggery as the basis on which law and order is maintained. No democracy can survive without the rule of law. Thuggery is not an alternative in any society that respects its people. We have a strong and vocal legal profession and the hope is that it will do its best to insulate the criminal justice system from intimidation and crippling political influence. Someone recently told me that I was a hopeless idealist and that Sri Lankans are more responsive to ‘fear’ than democracy. Even if that were true, can we be complacent? Can this be the basis on which to build a modern Republic? Did we give up fear of the British to replace it with fear of our own? Surely not. Our political leaders must have our respect but they must in turn respect us. I have always argued that in Sri Lanka we have a strong tradition of dissent and democracy, especially in the south that cannot be completely buried overnight by ‘fear’.

The rule of law goes beyond the criminal justice system. As Shanta Devarajan from the World Bank pointed out in a lecture recently, in many developing countries – and some developed – there is a business culture of exceptionalism. Individuals, businesses and professionals make their own private deals with government that will maximise profits and bypass rules and regulations. This is most often because of the cumbersome procedure and corruption inherent in the system. One leading businessman told me that he has an individual follow the paper work and spend days sitting in front of bureaucrats till the work is done. Sri Lanka has a very low rating on the Easy to do Business Index. As a result of this desperate desire to get things done as well as the desire to bypass things like environmental rules and regulations, we have this culture of exceptionalism. In the short term it may lead to growth but in the long term, as Devarajan pointed out, it will skew the system and increase corruption and abuse at all levels. Whoever comes to power must have the courage to transform this system, to make it equitable and efficient. This can only be done if there is a streamlined process and strong anti-corruption systems.

In political science discussions there is a great deal of argument about strongmen, not so strongmen and consensus builders. It is true there are a large amount of strongmen being elected but the Maldives and the US House of Representatives show that there are counter trends. Young people are themselves divided. The over 30s are open to strongmen and neo liberal economics but those in their 20s and in their teens – the Climate Change generation – are very different and for the most part radically democratic.

From my experience around the world, the solutions that are sustainable and long-lasting are those that are the result of participation, consultation and consensus. The leader mainly guides and directs the process. This kind of politics unifies a country, brings people together and allows everyone to have a stake. Whether it is constitutional reform or the writing of legislation, broad based participation and consultation followed by quick and effective decision-making based on those discussions is the only way forward.

Consensus building needs a different mindset and a different approach. The quick and effective decision making in forming and implementing those decisions is also key or it will lead to chaos. I do not know if any of the candidates are committed to such a leadership style but one hopes they will develop it when they come to power. A constitutional solution to our ethnic tensions will only come about if everyone on all sides adopts this mindset. It is time. We are weary.

Hatred toward ethnic minorities at its peak

Extremism, hatred and vicious bile is not only on the streets these days but has become the mainstay of many of our social platforms. The attack on women and supporters is sometimes more vicious than the attack on the candidates. Another major flaw of democracy in Sri Lanka has been that politicians have deployed ethnic and religious extremism as a means to come to power. Once deployed it is hard to take back and has a life of its own with one group more extreme than the other.

Sri Lanka has been identified by many as a place where hate speech needs to be seriously addressed. Recently I was given a study of hate speech in the campaigns on Sri Lankan social media. The hatred toward ethnic minorities must be at its peak. It was truly horrific.

Perhaps social media is like that in all countries. Yet, campaigns that incorporate hate speech as part of their mobilisation and even threaten violence against groups and individuals suggest to us that thuggery will be part of their governance. This is particularly disturbing given our religious, ethnic, gender and political diversity.

Democracy without social justice will only be the empty game of the elites. We must ensure the health, education and social welfare of all citizens in ways that are real and meaningful to them. Inequality is now a major concern both nationally and globally. Serious measures have to be taken to deal with inequality and poverty. Democracy means nothing to people unless these concerns are met and they will use their vote accordingly. Neoliberalism is often the death knell of democracy because it does not address issues of social justice. Social justice and social welfare programs must be the centrepiece of any political agenda especially in times of economic hardship.

Social justice issues in today’s world must include environmental concerns and climate change. A great deal of damage is being done to our coastline, our forests and our wild and sea life. Plastic contamination is also of serious concern. We have not even begun to honestly analyse our carbon footprint. The time to address these issues is already overdue. Best practices exist from around the world, including China, on the ways and means to try and deal with the dilemma between rapid economic development and environmental protection. Research shows us that nature is very resilient and that with timely intervention we can reverse the course of degradation. All candidates should have a strong commitment to environmental issues that impact us in fundamental ways. In recent times people all over the country have been activated on this issue so the election should result in the expression of these concerns at the national level.

Recently I was at a gathering and I mentioned the word freedom. People raised their eyebrows and waved my words aside. For people involved in human rights, freedom, is the air we breathe, it is second nature. It literally hurts to see it brushed aside so lightly. It is difficult to accept that for others, the freedom to express one’s opinions, assert one’s thoughts and choose one’s lifestyle is expendable and all these dreams must be left at the door of national security and national development, concepts that are vaguely defined. Or is it the culture of exceptionalism in the belief that given my class, social status or political choices, my freedom will not be taken away only someone else’s?

The Easter bombings are a reminder that security is and will be a major concern in the foreseeable future. We need decisive decision making but it need not be dictatorial. We need competence and a people with a wide array of skills. No-one is going to question the need for people to feel secure. Yet we must be aware of all the issues. Unless the response is properly calibrated we can actually increase our insecurity by leading to a ferocious backlash.

The US invasion of Iraq must be a reminder of what we should not do. ‘National security’ along with ‘development’ cannot be just catch phrases that justify everything. We must have proper institutions, processes and competent professionals to handle these issues. The war room is no longer about autocrats.

In addition security forces must not be forced to pursue partisan political ends so that ‘national security’ and ‘development’ become excuses to do diabolical things. Who will guard the guardian? Who will watch the watchdog? It has to be us. Without freedom that will not be possible.

Courtesy of the Daily FT; original cation: Who will watch the watchdog?