Failure to identify culprits threatening rights activist Nandimal, may point a finger towards the police – Senaka Perera, Attorney at Law 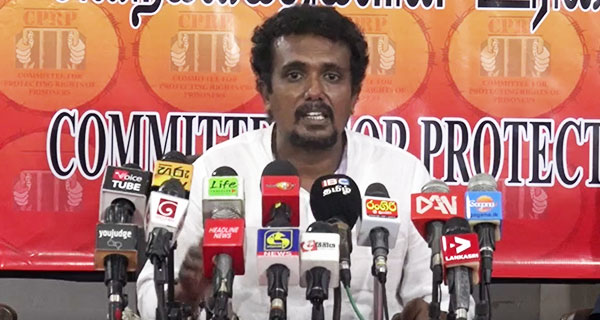 Image: Sudesh Nandimal is a frontline fighter for prisoners’ rights in Sri Lanka.

In case of police failure to identify those who are trying to endanger the life of rights activist Sudesh Nandimal, the finger may be pointed towards the police or authorities, says Attorney at Law and the president of the “Committee for Protecting Prisoner’s Rights” (CPPR), Senaka Perera.

Speaking to Sri Lanka Brief, Perera told that CPPR have made a detailed written complaint to UN Special Rapporteur on human rights defenders on threats to Sudesh Nandimal.

The statement issued by CPPR on recreant intimidations and indirect death threats to Nandimal follows:

Ensuring the security in connection with the death threats to Sudesh Nandimal Silva, an eyewitness to the Welikada prison massacre

Sudesh Nandimal Silva, one of the key witnesses in the HC(TAB)/493/19 case which is being heard before a three-judge bench of the Colombo High Court, has once again received death threats. The most recent incident was on 7th July 2021 when two unidentified persons had visited the apartment complex Mr. Silva is resident of, named “Lakhiru Sevana”.

This is owned by Sri Lanka Railways, and located in Maligawatte (Colombo district). The men and inquired from his neighbors about his whereabouts. They had had made remarks indicating that some harm may come to Mr. Silva in the near future.

On the same day, some unidentified persons had also visited a relative’s house in Mount Lavinia (Colombo district) and inquired about Mr. Silva. He had lived there about 15 years ago.

A complaint has been lodged with the Dematagoda Police Station on the same day (7th July 2021) under CIB 1/117/42. Two other persons have given statements regarding the above incident under the same complaint.

Furthermore, preparations are currently been done to handover the video containing CCTV footages of the incident for investigations.

Those who are trying to endanger the life of Sudesh Nandimal Silva should be identified along with those who are behind this and his safety should be ensured immediately.

He had previously received various threats linked to him being a witness to the 2012 Welikada Prison massacre case and for criticizing the government’s unfair and unjust actions through the media. These threats include the shooting at his sister’s house in Moratuwa, where he was staying temporarily.