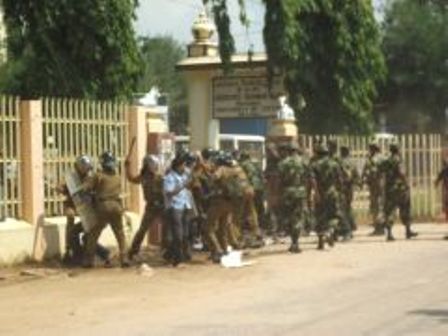 E.Saravanpavan, MP, Jaffna
November 27th is the Tamil Eelam Liberation Tigers’ Heros Day on which day people offer their commemoration to the demised  warriors.    It is customary for people to pay their respect to the deceased on such days. This salutation offered to their blood brothers, relations and parents has been mercilessly suppressed by the forces.   This being a well planned act of the forces, the consequences had brought the Government’s false disguise to the international community.
It is  possible that if such incident had not taken place in the Jaffna Campus premises, yesterday and the day before, the international community  wouldn’t have come to know about it.

Arrangements for this Heros’ day  commenced in the Jaffna peninsula from last 21st.   Since the day leaflets relevant to this day were displayed in the Jaffna campus premises, Army was interfering unnecessarily.  Further, they have started threatening the students in their civil clothes

As the peak of this matter, on 27th November, the army personnel in civil clothes entered the campus premises expecting lightning of oil lamps in commemoration of the day and threatened the students with their arms and ammunitions.   Further, expecting the lightning of lamps in the night at the Ananda Kumarasamy Ladies Hostel and Balasingham Boys hostel, they have gathered around these two hostels and kept the students under their custody.  Their actions exceeded the limits by time. Thereafter, the army along with police entered the Boys hostel and locked the students inside their rooms and then gathered themselves on the top floor.  No student was allowed to go out.

Since then Uthayan Newspaper’s Editorial section received numerous calls from the parents and students, saying that the students  are kept locked in rooms and they fear that anything might happen to them anytime and therefore sought  help from the newspaper.  Then, I, along with my body guards and some other media personnel rushed to the scene.  We travelled through Ramanathan Street and approached Ananda Kumarasamy hostel.   We saw several army & police vehicles parked  in front of this hostel in the railway street.   However the Girls’ hostel remained s

At that time I noted the army personnel  entering the Boys hostel and threatening the students.   Immediately, I travelled through Brown street and reached Balasingham hostel.   I saw the campus security there along with two police offices.  I got down from my vehicle and inquired as to what happened. Then they said they were not in a position to do anything.

At that time I saw a large number of army personnel running from the hostel towards the entrance with sticks and guns in hand and proceeded angrily to the Ladies Hostel.  Then I too ran in the same direction and on my way I saw Jaffna HQI Sam Sigora standing there.  Then I saw an army officer hitting a person’s face by keeping him standing against a wall of a Hindu temple.   Then, I went to the scene and shouted to stop hitting.  When my bodyguard came and said in Sinhala that I am a Member of Parliament the officer stopped his blows.   When the person who got the blows raised his head, I recognized him as the Editor of Uthayan newspaper.  I understand that he was attacked for taking photographs of the activities of the army and also the lamps lighted in the Girls hostel.  When I accompanied him safely, two persons, their faces covered with masks, came by a Motor Cycle ( NPNA 2904) stopped in front of my vehicle and tried to grab the camera but the Editor safeguarded it wisely.   When my bodyguards requested me to get out of the place, I attempted to board my vehicle.  Then, two masked persons came in a motor cycle (NPXY 4358) and one of them photographed me and my vehicle and then vanished.  Thereafter, I went to the Jaffna Police Station and lodged a complaint about the whole incident.  Uthayan Editor too lodged a complaint and thereafter I admitted him to the Jaffna hospital and returned to my office.

Yesterday (i.e- 28.11.2012) we again received some phone calls from the students and people.   In fact the students, wearing pieces of black fabric around their mouths and holding slogans were sitting very peacefully at the University entrance.  They condemned the army for their mean act of breaking the Girls hostel doors and entering it and demanded an explanation from the university authorities. Thereafter they proceeded in a peaceful march, from the Science faculty towards the University entrance, without disturbing the general traffic.
At that point Jaffna HQI Saman Sigora stopped the students’ march and ordered the riot police who stood near by, to attack the students. Followed by this attack, a large number of army personnel who were at the scene too started attacking the students with their guns and kicking with their shoes.  As a result, 07 students got severely injured and more than 10 got minor injuries. This includes the girl students and the media personnel who went to collect news.

I was informed that the army and police attacked the students mercilessly and that 04 students were arrested. I went to the spot immediately with my guards.  About 100 meters distance, on either side of Ramanathan street, was prohibited for traffic. Nobody, including me, (although I identified me as Member of Parliament) was permitted to go inside the university.

Thereafter, we stopped our vehicle in front of the Science faculty and started walking but again we were not permitted. Then, I asked the Jaffna HQI Saman Sigora, who was standing there as to what is happening.  He answered that the situation is under control  and asked me to leave the place.  Then I asked him whether he would release the arrested students for which he said that all were released.  Then I showed him one student detained in the police vehicle. a police officer who was standing nearby said the person detained in the vehicle is not a student.  I asked him if he is not a student and then to disclose his identity.  The police officer agreed to my demand and asked the person to prove his identity.  The person produced his campus identity.  When I asked the officer how he can detain a student, he told me that the campus authority must prove that he is a student.
Immediately Professor Velnambi, Deputy Chancellor of the University and Lecturer Viskaruban were summoned to the spot and inquired.  When they made arrangements to prove the student’s identity through one of his section Lecturer, then it was agreed to release him.  At that time, the student said that his camera has been confiscated and that he needs it back.  Then the police said that they do not have such camera with them and that it is in the possession of the army.  Then, Mr. Saman Sigora got the camera from the army but said that he cannot give it now and wanted to produce it in Courts.

Immediately,  I asked Mr. Saman Cigora the reason for him to take the camera to Courts and under what section he is going to file  a case.  I further clarified that Emergency Regulation is now lifted  and that the particular student had not photographed any prohibited area or high security zone.  However, the HQI was seemed not satisfied with my explanation and got the student to erase the photographs from the film before handing over the camera to him.

Thereafter, I told the HQI that His Excellency the President is emphasizing repeatedly that there is no separatism in this country  but  he (HQI)  is treating the students like terrorists.  As a reply, he told me that some are sowing seeds for separatism.  Then I told him that he can arrest such people but not the innocent students.  He answered quite sarcastically that he does not know who is creating separatism and who is not.

At that point, an army officer standing close by insulted me very badly. I asked the HQI as to how and why army gets involved in a civil matter that should be dealt by the police and what right army officer has to question a Member of Parliament like me.   Then, the army officer exploded in a threatening tone that he could show his power and whether to show it to me now.

Knowing the situation exceeding its limit, the HQI ordered his men to take me out of that place.   Then I asked my driver to bring my vehicle ( …   2234) and when it was brought. I was highly shocked to see the front, rear, right & left glasses were smashed.  I asked the HQI how come a vehicle parked in a place where lot of army & police officers were present, got smashed like this.

Then the same army officer interrupted our conversation and approached me with an angry face and asked me whether I say that the army smashed the vehicle.  Then the HQI and this army officer forcibly put me into my vehicle and sent off.   Thereafter, I made a complaint in the Jaffna Police station through my Guard.   According to the people who were around the place where my vehicle was parked, it is the Army’s Intelligence Division personnel who smashed my vehicle.

I suspect that the masked persons who photographed my vehicle are behind this damage and it is for identifying my vehicle they have taken a photograph in front of Balasigham hostel.